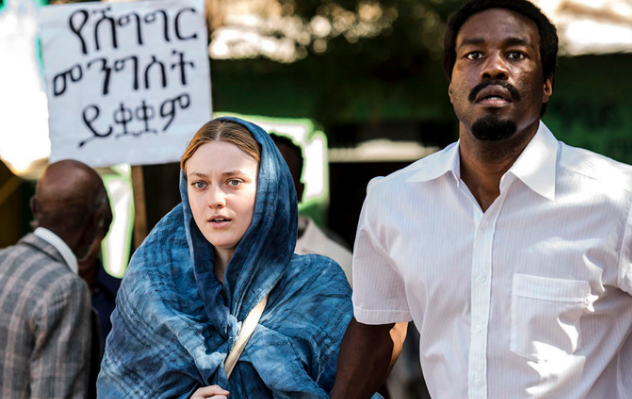 Based on the Camilla Gibb novel of the same name, the film Sweetness in the Belly tells the story of an Anglo-Irish woman named Lily (Dakota Fanning), who was abandoned in Africa as a child and raised in Morocco as a devout Muslim.

Seven-year-old Lily is brought to the town of Bilal al Habash by her nomadic free-spirited parents to be blessed by a revered Sufi master. Unfortunately, her parents left her behind while intoxicated on drugs and never came back. The film never shows how the parents were murdered, but it can only be assumed that the parents were tragically killed while trying to buy drugs.

Meanwhile, Lily is left behind at the shrine and its spiritual leader, Great Abdal, takes her in as one of his own and becomes Lily’s caretaker. At 17, she leaves for Ethiopia, where she falls in love with a quixotic doctor named Aziz (Yahya Abdul-Mateen II). Civil war is raging in Ethiopia as mass genocide threatens the lives of everyone around them and Lily is forced to flee as a refugee to London, England. Sadly, both Lily and Aziz are separated during the outbreak of civil unrest in the region and Lily doesn’t know the fate of the only man she’s ever loved.

Lily struggles to find work in the medical field because she has no professional experience. She manages to land a menial job as a nurse emptying bedpans. She meets a fellow refugee named Amina (Wunmi Mosaku), who has fled the same war, and the two strike up a close friendship. Their friendship also becomes a mission to help reunite other refugees with their families. However, Lily’s goal is to trace back steps to where Aziz was last seen and to try to find her long-lost love. Amina, however, is harboring a secret about her past that inevitably changes the course of her future.

Sweetness in the Belly immediately sparked controversy based on the logline to the story and the visceral reaction of seeing an image posted of Dakota Fanning wearing a blue hijab.  Because of the nature of knee-jerk reactionary outrage, social media made the story of a film that had not yet premiered the center of controversy. The faux rage machine turned the adapted story from a novel published nearly 15 years ago into identity politics fodder using such terms as “whitewashing” to feed the frenzy further. Dakota Fanning herself had to put out a statement about the issue:

“Just to clarify. In the new film I’m part of, Sweetness in the Belly, I do not play an Ethiopian woman,” the 25-year-old actress wrote in a message on her Instagram Story. “I play a British woman abandoned by her parents at seven years old in Africa and raised Muslim.”

There is definitely a place to have conversations about whitewashing. We address these issues all the time on this website. However, words matter. We are descending down a rabbit hole of taking the power out of a term when context and details are overlooked for the sake of online attention. That being said, without the backlash, this film probably would have been lost on most people’s radar. Although both Fanning and Abdul Mateen II are very popular and talented stars, there’s nothing compelling about this story and it misses the mark.

I don’t agree with the criticisms of this film being a tale of a “fanfiction Muslim love story” or a whitewashed portrayal of Muslim life. This adaptation parallels with the book written by Toronto-based writer Camilla Gibb. She is a white woman and wrote this from a white perspective. The white gaze doesn’t change in the screen adaptation, even though the film is directed by Ethiopian-born filmmaker Zeresenay Berhane Mehari. Mehari is most known for his award-winning film Difret, executive produced by Angelina Jolie. In that film, it tells the story of a kidnapped 14-year-old girl child bride who ends up shooting the man who is her would-be husband.

While Sweetness in the Belly does have the best of intentions, the white savior trope rears its ugly head into this story and it’s hard to ignore. I’m personally not too hard on these kinds of films because I’m one of the few people that enjoyed Green Book in spite of its own racially-charged controversy. However, Hollywood has a pattern of churning out these films constantly like an Amazon fulfillment order on a conveyor belt.

Amina is a wounded soul that needs repair, and Lily is conveniently at her disposal to help. I don’t take issue with Lily being of help to Amina, but when Lily’s relationship to Amina is the job of saving her from one tragedy to the next, it begins to look less like a mutual friendship and more like a plot device to prop up Lily’s heroism and resilience. The timeline of the plot meanders back and forth from past to present as we see Lily’s life during her courtship with Aziz and after she fled Ethiopia and starts a new life with her friend Amina. This seesaw-effect on the plot doesn’t give the viewer enough time to understand what the significance is for Lily’s narrative. Is this a love story about forbidden romance and finding her lover? Or is this a story about Lily’s missionary work in London while trying to fit in as an outsider to a community filled with people of color?

While Lily is hellbent on finder her lover Aziz, an Indian doctor named Robin Sathi (Big Bang Theory’s Kunal Nayyar) is attracted to her and can’t quite get the hint that she’s not interested. He appears at the most random and inconvenient times, and there is no real meaning to have this character around other than to be a thorn that distracts and further complicates Lily’s motives and intent. Her goal is to find out what happened to Aziz after she fled from Ethiopia, not to waste time on a guy who has a crush.

Sweetness in the Belly does explore serious issues like female circumcision, which was an important development in this particular story and the region where this narrative takes place. Other issues like tribalism, class warfare, and politics are also explored. This is not unfamiliar territory for the director who gets it right in scrutinizing these problems.

The most compelling character in this story is not its lead character Lily, but her friend Amina. Amina has a dark and complicated past; her husband is gone and she is now a single mother. She’s hiding a secret that is connected with her past and has been a victim of some of the monstrosities that have taken place in her home country. Her story is the one that delivers more substance and executes a convincing story arc. While this movie certainly has the potential, it just misses the mark on its story structure and Lily’s character development and falls victim to dated cinematic tropes that Hollywood has a bad habit of repeating incessantly.

Sweetness in the Belly premiered at the 2019 Toronto International Film Festival.