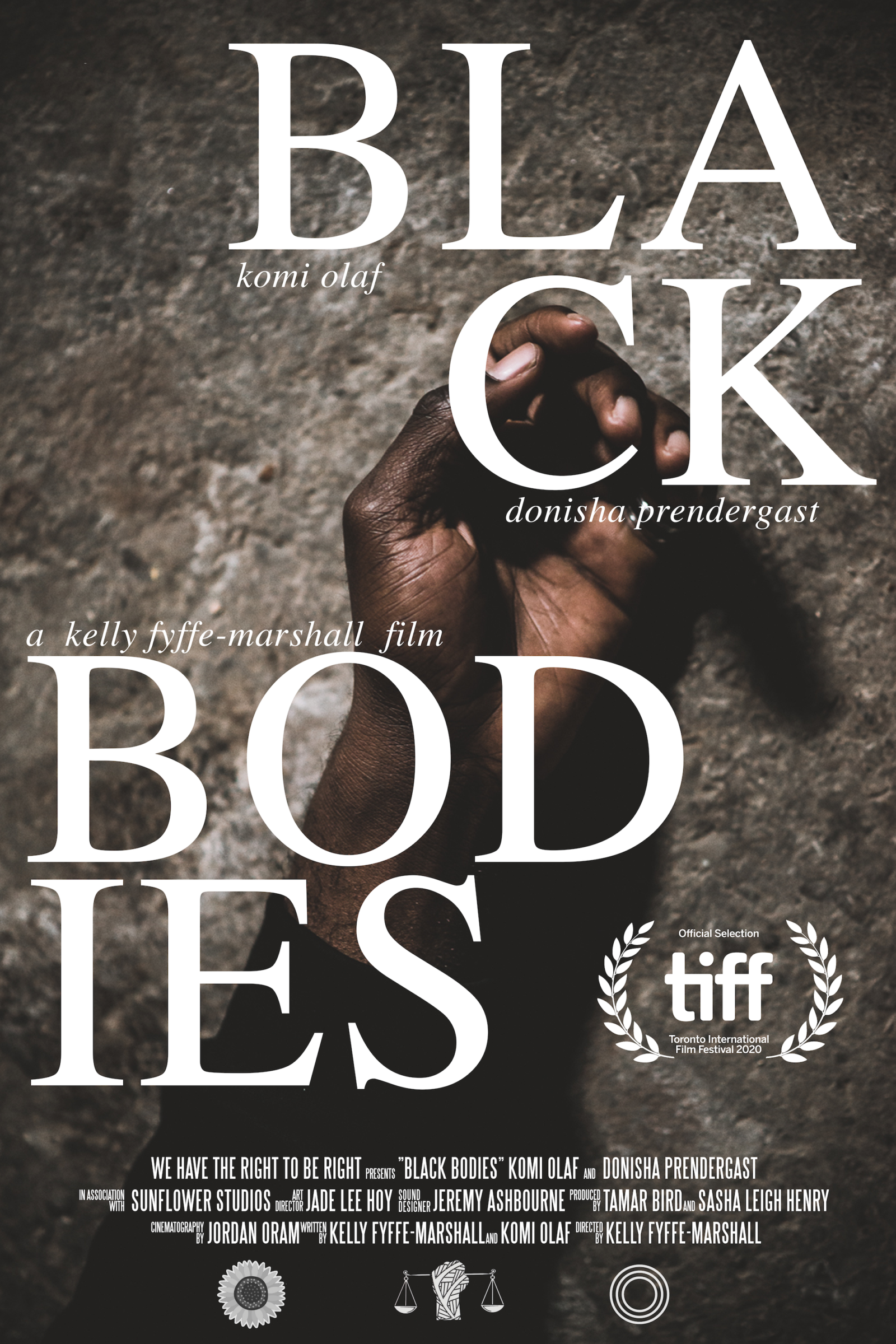 For the 2020 Toronto Film Festival, the Short Cuts Programme 02 section is defined by a combination of films created by various directors. The festival explains:

“The unforgettable characters and subjects in these seven startling films demonstrate the need to maintain hope in the face of daunting challenges, and anything else that stymies our efforts to write our own stories.”

One of those incredible stories is Black Bodies by Kelly Fyffe-Marshall, who is a dedicated director, screenwriter, and social activist.

According to her website, Kelly has directed music videos, documentaries, narratives, and branded content. With her vast experience, she has also been invited to be a juror for the Canadian Academy of Film and Television as well as several film festivals.

She has a deeply rooted passion for film and humanitarianism that is reflected so compellingly in her work. To that end, she was invited to speak at TEDx Youth Toronto 2018 about making change in the world with a speech entitled, “Make Ripples Where You Are,” in which she encourages youth to be global citizens.

Black Bodies is a fervent and powerful reflection of Black pain through spoken word that leaves audiences with shivers. During a new wave of Black Lives Matter protests and calls for justice, Black Bodies speaks the lived truths of the Black community in a very compelling and unforgettable way.

The scenes of death and punishment impose a painful flesh memory of what it means to be Black in an anti-Black police state. The soulful art form of spoken word creates a unique and visceral sensation to audiences. Viewers are not only placed in the scene of brutality, they are immersed in the tragedy, the rawness and the realness.

One of the major themes of the film are spoken words that echo “day in, day out” and then describe the violence, psychological trauma, and oppression the Black body must endure each day.

The world that viewers can see shows a Black man surrounded by bodies that are like silhouettes carved into the asphalt in what looks like a vacant garage or warehouse. He is frozen, as he seems to be waiting for his turn.

A Black woman appears. She seems to want to save him, but all efforts are in vain. The spoken word follows these images, describing how Black men are killed in their sleep and how Black people are often left “clinging to the powers of melanin” as they are murdered.

It is uncomfortable and unsettling because it is so true. For some, it’s too much truth. For many people outside of the Black community, it is one thing to read about Black death in the news, but a completely different to see it depicted in such an unapologetically bold way.

Near the beginning of the film, the line, “Officer, don’t hold my Black body to the floor” is spoken as the Black man is surround by the dead bodies of other Black people. It is a truly heartbreaking moment when audiences realize that he is not hoping or even expecting to survive, but simply wants to die with some dignity.

It truly delves into the sick reality that Black bodies are not only targeted and murdered, they are also killed in extremely shaming ways that echo memories of slavery and murder for sport.

There is something very haunting as the Black man waits to be hunted like prey, like an animal that is trapped in a cage. The darkness of his location adds to the nightmarish tones of death and violence. However, it also does something interesting: it plays on a fear of Blackness and darkness. The Black man is surrounding by dead Black bodies in a dark, black space. However, they can still be seen. It is blackness with blackness surrounded by blackness. Even when the Black woman arrives, that is more blackness.

It seems that Fyffe-Marshall has formulated a world that represents the greatest fears of a racist white civil society by zooming in on Blackness, and the ignorant fear that seeks to erase it.

The poetry behind this film is equally haunting as it is beautiful. It seems to capture what it means to be Black in a mysteriously raw way. Black people are poetry and culture wrapped in diaspora and multigenerational trauma, molded together with resilience and melody. Black people are dying; they are being murdered in the dark. Although we are chanting odes and spoken word chants in every corner of the world, we are still muted in the darkness, in blackness.

Fyffe-Marshall doesn’t hesitate when it comes to presenting pain. She knows it and has likely more than experienced its sting. Films like Black Bodies will always be necessary as the Black community and others labor, fight, and protest so that one day, finally, our Blackness will emerge in all of its brilliance and love, out of the darkness, and into the glowing melanated light.