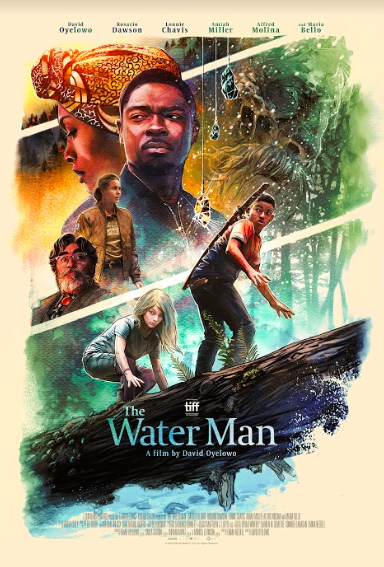 David Oyelowo makes his directorial debut in this fantastical and whimsical tale about a boy searching for hope and immortality to save his dying mother. Oyelowo stars as Amos Boone, the father of Gunner (Lonnie Chavis), who is doing his best to keep his family together in spite of the dire circumstances ahead of them. Amos has a fractured relationship with Gunner, and it’s clear that it’s the mother Mary (Rosario Dawson) who is the glue that keeps them together. When Gunner’s mother’s illness takes a turn for the worst, Gunner is determined to find the cure to keep her alive through a mythic creature referred to as the Water Man.

Gunner meets a young girl Jo (Amiah Miller), who is bold, fearless and has enough bravado to join Gunner’s quest to find the elusive Water Man. The two are willing to risk their lives going into the deep Wild Horse forest to meet the terrifying man notably known from ghost stories and horror folklore. As they meander through the terrain of this forest, which by day looks like a Thomas Kinkade painting and by night feels like a creepy Edgar Allen Poe poem, the two discover strange happenings all around them.

In a statement about The Water Man, David Oyelowo says, “I grew up loving family films that have adventure, fantasy, and jeopardy whilst never patronizing their young protagonists. As a father to four children, I want to share films with my kids that both entertain and equip them for the highs and lows that lie ahead. I relish watching films with them that both transport our family to a different world and then leave us having meaningful conversations. I love films that do that, so I set out to make one for them, other families, and hopefully, the whole world!”

The Water Man delivers in its execution of a story and film that can allow you to escape for a couple of hours. The cinematography is gorgeous with bright hues to illustrate the grandiose forest Gunner and Jo escape to, but also candidly depicts the beautiful tiny town of Pine Mills where this family resides. The gorgeous set design inside of the home of Jim (Alfred Molina) is impressive and reveals the character of this man and his unorthodox beliefs. Gunner confides in Jim shortly after he learns about the history of the Water Man, and when Gunner finds out from Jim that the Water Man cheated death, not only does it pique his interest, but he believes it is destiny that he must seek this mysterious man.

When Amos discovers his child has gone missing, he seeks help from law enforcement through the aid of Sheriff Goodwin (Maria Bello), who begins to track both Gunner and Jo, but knows that time is not on their side as the clock is ticking.

Lonnie Chavis gives a beautiful and brilliant performance in this film as Gunner the lead protagonist who takes us on this journey. David Oyelowo also delivers an incredible performance, dropping his British accent to play Amos, a father who is struggling to reconnect with his son and come to terms with his wife’s mortality.

The Water Man is also a Harpo Films production, which means Oprah Winfrey served as an executive producer on this picture. There are some parallels of fantasy between what The Water Man has and another film Oprah Winfrey was involved with — A Wrinkle in Time: searching and longing for something beyond the bounds of reality and experiencing that in the supernatural. Growth and character development in this story with respect to Gunner’s character and a little of Jo’s is what makes The Water Man such a fully fleshed out, entertaining, and impactful narrative.

Oyelowo’s directorial debut hits the mark, and he’s definitely found his place in this tough genre. To give credit to the writing, The Water Man is based on a script by Emma Needell that was featured in the 2015 Black List.

This is a movie that sticks with you and a story that gives a lesson of coming to terms with death that so many of us (and not by choice) are learning more each and every day.  The film is entertaining but also gives an opportunity for children to understand and learn about life and death in fantastical terms that may be hard to explain in more traditional ways.

The Water Man made its premiere at the 2020 Toronto International Film Festival.