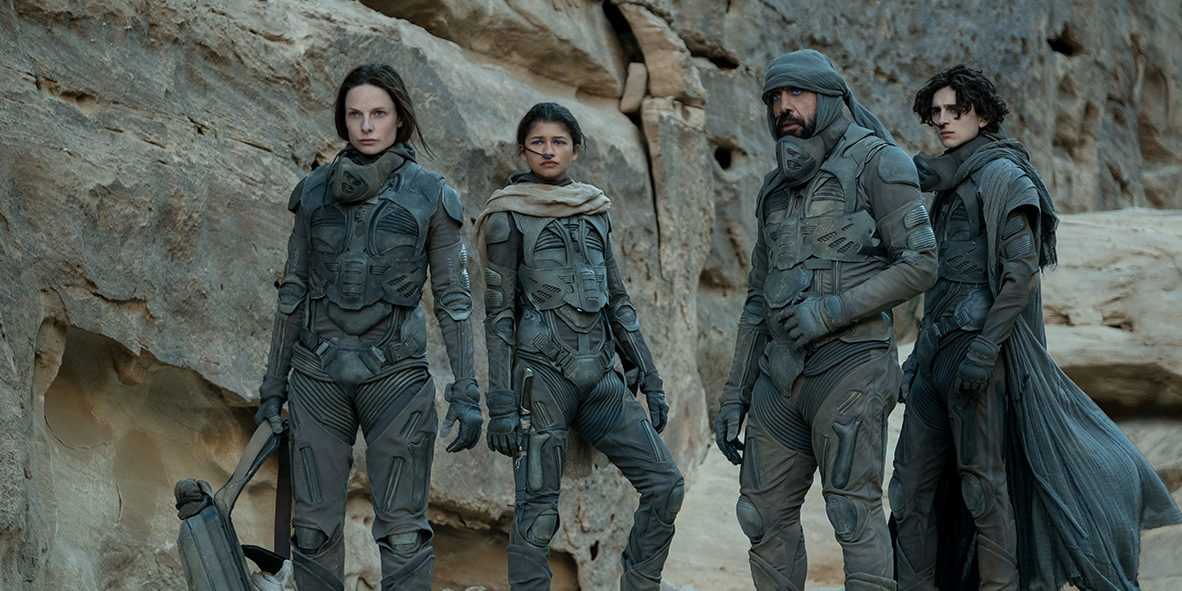 Last month I went to a special sneak peek presentation of Dune at my local theater. I took my brother, who had only heard of the video game and didn’t know the characters or story at all. I couldn’t remember much myself, having seen Dune (1984) once at a young age. We were both blown away, not even fully understanding the plot or background.

When it was announced that Dune would be at TIFF in IMAX, I knew I had to see it. Let me tell you, it does not disappoint. I love a good sci-fi epic. Give me world-building, give me an amazing cast, give me stunning visuals and delicious costume design, give me pacing that doesn’t make me die of boredom. Dune delivers on all accounts. Every scene is iconic.

Dune is part one of director Denis Villeneuve’s feature adaptation of Frank Herbert’s 1965 science fiction novel of the same name. It is about a young man, Paul Atreides, and his role as heir to the throne that governs the planet Arrakis, which has the most valuable asset and element in the universe known as “spice.” Paul, who has been living in a bubble of privilege and wealth, must prepare himself for leadership and battle as forces cause conflict and war on Arrakis.

The film is led by an all-star cast including Timothée Chalamet as Paul Atreides, Rebecca Ferguson as Lady Jessica, Zendaya as Chani, Oscar Isaac as Duke Leto Atreides, Josh Brolin as Gurney Halleck, Jason Momoa as Duncan Idaho, Javier Bardem as Stilgar, and Stellan Skarsgård as Baron Vladimir Harkonnen. There are so many others that round out this beautiful, talented cast. Villeneuve (Blade Runner 2049) is a visionary director, and this film showcases why.

The level of world-building for Dune that Villeneuve takes on is astounding. It comes off naturally. At no point during the film did I feel the dialogue was treating me like I was clueless and couldn’t comprehend the massive universe that is being introduced. You do not have to be familiar with the book or previous film or television adaptations to get through this movie. This world is a stunning blend of adventure, mysticism, family relations, and politics. Dune is a complete immersion into a new universe — science fiction nerds rejoice.

As mentioned, the cast in this film is ridiculously talented. There is something to be said about a big cast that can give off great chemistry. Each played their role with perfection. But, you know that moment when you watch a film based on a movie and think this actor was born to play this role? That is how I feel about Chalamet as Paul Atreides. I know he is a great actor, but wow if he doesn’t embody this character to the fullest. Paul’s character development is fantastic. Chalamet is great at showing the audience how his character has changed through the film.

Another character that is absolutely one to watch out for is Lady Jessica, played by Ferguson. According to Villeneuve, the character has been expanded and developed on a higher level than in the novel. In my observation, she is complex, a role model, aware of hierarchy but still owning her power. Ferguson portrays her with such ferocity and conviction. I can’t wait to see what she does next. The relationship between Lady Jessica and Paul, mother and son, is a healthy and strong one. The importance of family is solidified in their interactions.

Dune is host to some phenomenal action sequences. Not only are we watching stellar stunt work and choreography, but the action is intensified with dazzling landscapes and music — they practically become characters on their own. Both heighten the emotional connection between the film, the characters, and the audience.

There is an intimacy in the film that comes from all the individual elements. From being moved by the sound to falling into vast wide-shot landscapes, Dune transports you to another time, another world, and another saga to enjoy.

The original score from Hans Zimmer is out of this world. The sounds he has developed for this film are beautiful, at times haunting, electrifying, and every other word used to describe something that just vibrates and elevates the senses.

Visually, too, Dune is breathtaking. Some comparisons can be made to the film Lawrence of Arabia from the desert landscape to the theme of finding your identity by being in contact with other cultures. There is this sensation of human versus the desert. The contrast in scale is something to behold.

Villeneuve and the entire cast have made something special. Fans are already chomping at the bit for Part 2. As Ferguson said before the film, “It’s such a f-ing good movie.” Dune will be available in theaters on October 22, 2021. Do yourself a favor, and see it in IMAX.

The Cast of ‘Dune’ Discuss The Fight Between Good and Evil