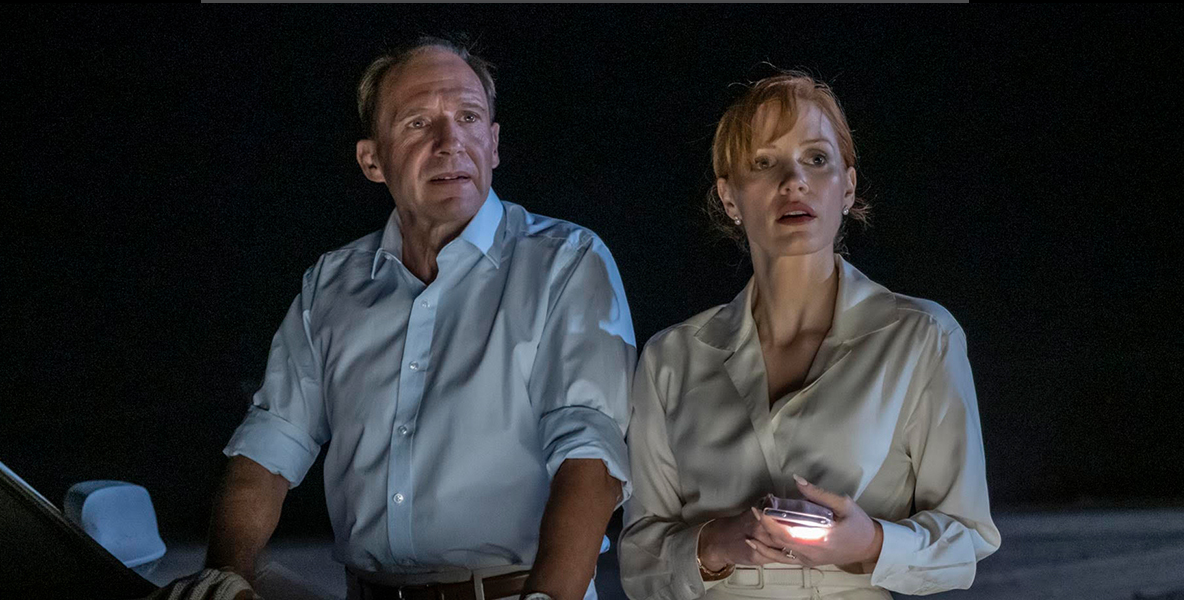 Have you ever watched a movie and fifteen or twenty minutes in you realized you hate almost every character on the screen? That is the reaction I had watching the House of Un-American Activities and Brookstreet Pictures film The Forgiven.

It’s honestly a true testament to the story and the actors that portray these characters. I am absolutely a fan of Jessica Chastain. I love her almost as much as Oscar Isaac did on the red carpet that one time. (You know what I’m talking about.) To hate her character on screen so much showcases the material and the acting chops.

All the stars in this film are great actors. They each embody their characters to perfection. The acting was more than enough to carry this film, but we also get a plot and dialogue that deepen the reaction that these people might just be the worst people ever. I think that was the point.

The Forgiven follows husband and wife David and Jo on a lavish getaway in the Moroccan desert. On a quasi road trip to a friend’s holiday villa surrounded by sand, David and Jo’s relationship is portrayed in the form of drinking, arguing, and quick and calm jabs here and there. Driving very fast and drunk at night, David and Jo are in a horrible accident where they hit and kill a young man just miles away from the party. They load the body in the back of the car and continue to their destination. The repercussions of the accident are explored in this new drama.

The opulent and wealthy are highlighted in a less than favorable light as sex, drugs, and alcohol walk the line between death, loss, and retribution. There is a clear divide between white people and people of color, high upper class and lower middle class, and wealthy tourists and local customs. The entire film is a commentary on cultural differences and the respect one should have for any culture, but also the respect we should have for each other and ourselves. In The Forgiven, values and morals are abandoned.

The dialogue, of course, did wonders to heighten that feeling of disgust. A character makes it a point to use the word “servants” instead of “staff” when speaking about the workers at the villa. Abbott’s character remarks that it “feels like a country where a useless man could be happy.” The snobbery of these characters is astonishing and yet relatable. I know people like this. Emotions ran high as I watched these rich white people living their best life in the absolute worst way. It doesn’t help to think how people can act like that, given the world right now. It’s too close to the truth. The Forgiven is a great film but also, at times, tough to digest.

The chemistry between all the characters is remarkable. Jo, played by Chastain, has a great connection with David, played by Fiennes, and Tom, played by Abbott. It’s different for each relationship. Jo and David have this thick disdain for one another, but also moments where you can see they loved each other once and maybe still do a little. Jo and Tom exude sexual chemistry on the screen. The awkward yet very sexual banter, each trying to entice the other, is really fun to watch. The mean-spirited jabs, bickering, and facial expressions give off very old-married-couple vibes. It’s perfect.

One of the themes in this film is death. There are different types of death: accidental, purposeful, glorious, honorable, merciful, punishable, to name a few. The Forgiven highlights that death is different for everyone. It can be slow or fast. The film plays with this idea with pacing and editing. The movie moves along slowly, like a slow burn, slowly agitating the viewer more and more as time goes by. It’s uncomfortable. In the film, death or loss can be a time for reflection, a time for atonement. The acts of atonement and retribution are explored, begging the question of which one is right. Director McDonagh does a wonderful job setting up reflection time for one of the characters, employing listening and watching instead of talking.

What makes this movie so great is the satirical nature of it all and the emotion it draws from the audience. It makes for an excellent conversation piece. The irony is, in the end in my theater, everyone left in silence. Personal reflection perhaps? There are some actual humorous moments because you are laughing at the character instead of with them. It’s a serious conversation about Americans and the rest of the world, and you can’t help but laugh but also awkwardly think it’s kind of true.

The Forgiven showcases ugly (on the inside) people in beautiful locations. The Moroccan landscape is gorgeous, a place of solitude and peace as you gaze out into the open dunes in contrast with loud party-goers and racist language. One of these does not belong. The disparity displayed on screen creates a heightened awareness, making the characters seem even more ridiculous and dramatic.

If there was ever a movie that showcased rich white people and everything wrong with the 1%, it’s this film. It’s bold. It’s a critique of the world. The Forgiven is well executed and did its job. US release dates have yet to be determined.

The Electrical Life of Louis Wain