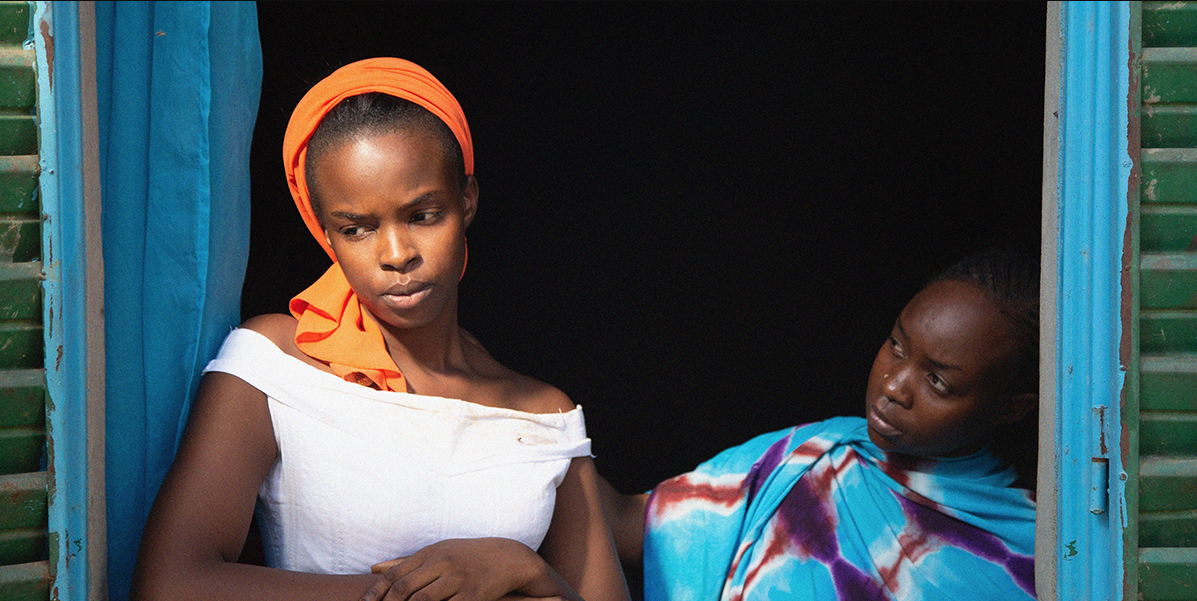 Lingui, the Sacred Bonds takes us to the West African country of Chad to experience a story about a single mother Amina (Achouach Abakar Souleymane) and her quest to grant her 15-year old daughter Maria (Rihanne Khalil Alio) the right to control her own body by taking care of an unwanted pregnancy.

Writer/director Mahamat-Saleh Haroun was inspired to write this screenplay after reading in his local newspaper about young Muslim girls in Chad abandoning their babies after enduring unwanted pregnancies due to not having access to birth control or abortions.

The film looks absolutely gorgeous. The first scene focuses on Amina as she labors to break apart a tire. Sweat glistens on her forehead and runs into her eyes as she cuts through the thick rubber with a homemade tool and wrestles out the wire from inside the tire. Amina is a craftswoman who lives on the outskirts of the capital city of Chad, making portable cooking stoves made from the wire. Amina then carries several stoves piled high on her head and in her arms. She walks several miles to the market to sell them.The first moments of the film we feel how hard Amina works without much dialogue. The cinematography is stunning. Matthiessen Giombini captures the regal beauty of the women of Chad immaculately.

Although the subject matter of this film is heavy, there is hope woven through the narrative. Unfortunately, the screenplay is weak. The story is predictable, and the characters are written in broad stereotypes. We are living in a time when women are writing women’s stories, injecting the brutal reality of the challenges women face onto the screen in ways we haven’t seen in cinema before. Writer/Director Mahmat-Saleh Harlan is a 60-year old man who has written several films written from the male perspective. His vision of Amina and Maria is superficial.

Maria is like any annoying 15-year old that we see in network TV shows here in America. She explodes at everyone, and the audience doesn’t know anything about her other than the fact that she’s pregnant and rude to her hardworking mother. We don’t get any time to see Maria’s relationship with any of her classmates other than Maria having another outburst when her friend asks if she’s pregnant. We know a little bit about Amina, but again her immediate reactions are broad and overacted.

However, this movie also is way too long. The challenge of writing and directing is knowing what to cut. The audience gets the point fairly quickly, and it’s unnecessary for this filmmaker to stretch these scenes out so long. Any potentially juicy conflict among the women is easily resolved in order to fall into the simple storyline flow. It would have been nice if some of the unnecessarily lengthy scenes were cut and the relationships between the women were more fully written.

It’s sad to say but this writer doesn’t write female characters very well. The male characters are also broadly written and easy to dislike. If we want to make films to raise awareness about Important subjects like abortion, shouldn’t we involve women in the storytelling process behind the camera? The script is so simple it made me want to bang my head against the wall screaming.

Don’t get me wrong, the actors did the best they could with this script. It’s unfortunate that the director/writer couldn’t support a female writer who could have given this film the wisdom and reality that comes from lived experience. The audience can totally tell that this script was written by someone who read about abortion restrictions in a local newspaper article. Women without resources are on the frontlines of this issue, and it’s important for storytellers to respect women by being mindful gatekeepers and providing opportunities for women to tell their own stories, instead of supporting those being created by men who already have resources.

“Lingui” means if you belong to the same community you’ve got to help one another in the spirit of peace, kindness, and solidarity. Lingui, the Sacred Bonds does its best, but falls flat.