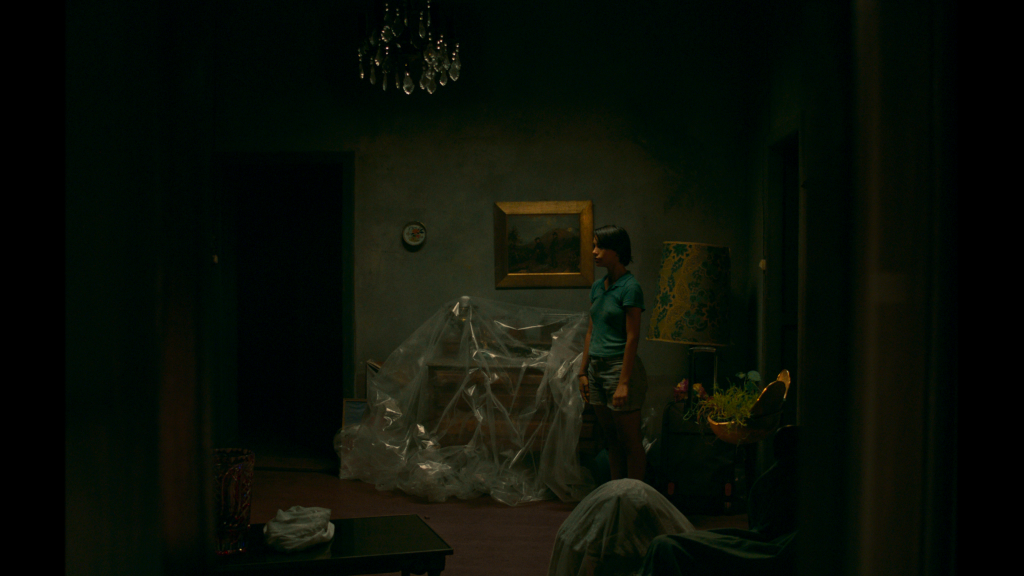 A 17-year-old girl, Emilia, travels to her aunt’s hostel in a small town at the border of Argentina and Brazil. She’s there to find her brother, Mateo, who hasn’t returned any of her calls. Aunt Inés is uninviting and dismissive, leaving Emilia feeling even more alone than before. As Emilia investigates Mateo’s whereabouts, locals tell her about the alleged beast spotted wandering around town. They believe it’s the spirit of an evil man shapeshifting into different animals. “And what does it do to you?” Emilia asks. The local girl tells her, “The worst.”

Emilia is shy and soft-spoken but determined to find her brother. She searches for answers around town to no avail and seems to be the only one concerned about his disappearance. Aunt Inés is indifferent about Mateo and about Emilia’s arrival in general. She’s mainly irritated by the whole situation with the beast, constantly running the people searching for the animal off her property with a shotgun.

There’s some bad blood between Inés and Emilia’s deceased mother, though it’s never revealed what exactly happened. Inés tells her niece, “When people cause you pain, it’s better to stay away.” We don’t know the reason why the family is estranged, but the tension in their interactions conveys a long history of conflict.

Emilia starts to hang out with Julieth, a beautiful guest staying at the hostel. We see Emilia’s gaze lingering on a couple of different women in the film, implying a desire she’s yet to act upon. In searching for her brother, she’s also searching for herself and a way to embrace her sexuality.

The dialogue is concise with no overlapping voices or people interrupting each other. There are long pauses between sentences and characters spend minutes just staring at one another. These exchanges are awkward and unsettling, leaving us hanging on their every word. It’s reminiscent of a Yorgos Lanthimos film in that the characters make declarations rather than engaging in fully flowing conversations.

From the beginning, To Kill the Beast is like walking through someone else’s dream. Speech can be weird in dreams, so the odd line delivery actually fits this setting. In one of the more surreal moments, an ox slowly walks from the jungle into an opening, framing Emilia’s window with its horns — a scene that looks like it came straight from a dream, or maybe a nightmare.

The film opens on a glowing full moon behind clouds that look more like smoke. A heavy fog cloaks the small town, creating an otherworldly landscape. It thunders without raining, a perpetual storm. A church-like organ plays haunting music, but it’s the unrelenting chirp from crickets that is essentially the score of this film. They can be heard inside and outside, day or night, often accompanied by various animal noises — birds, dogs, roosters, goats. These sounds of nature make you feel exposed to the elements, yet the humidity in the air is claustrophobic. Everyone’s skin, clothes, and hair stay damp with sweat. Hearing bugs buzzing sparks that familiar crawling sensation; it’s right next to your ear, flying around, landing on your skin.

Cinematographer Constanza Sandoval (Boat Rower Girl) sets the eerie tone by lingering in the vacant spaces around town. When Emilia repeatedly leaves messages for her brother, the camera pans around an empty house as the phone rings and the answering machine kicks on. Seeing Mateo’s empty home deepens the mystery surrounding his disappearance. In the jungle, the search party’s flashlights dance across the trees like a scene from Twin Peaks.

Also, like Twin Peaks, this secluded town is nightmarish and surreal. With the fog rolling through, there’s a sense that this mysterious place is floating above the real world, sitting in its own realm filled with secrets and lore and monsters.

To Kill the Beast is a slow burn with a very loose narrative made up of ambiguous moments. The true meaning of the film may be hard to wrap your head around, but perhaps the best way to experience it is to just enter Agustina San Martín’s dark, tropical world and immerse yourself in the atmospheric horror. Whether you get it or not, this beautiful nightmare is still worth a watch.

To Kill the Beast premiered this week at the 2021 Toronto International Film Festival.