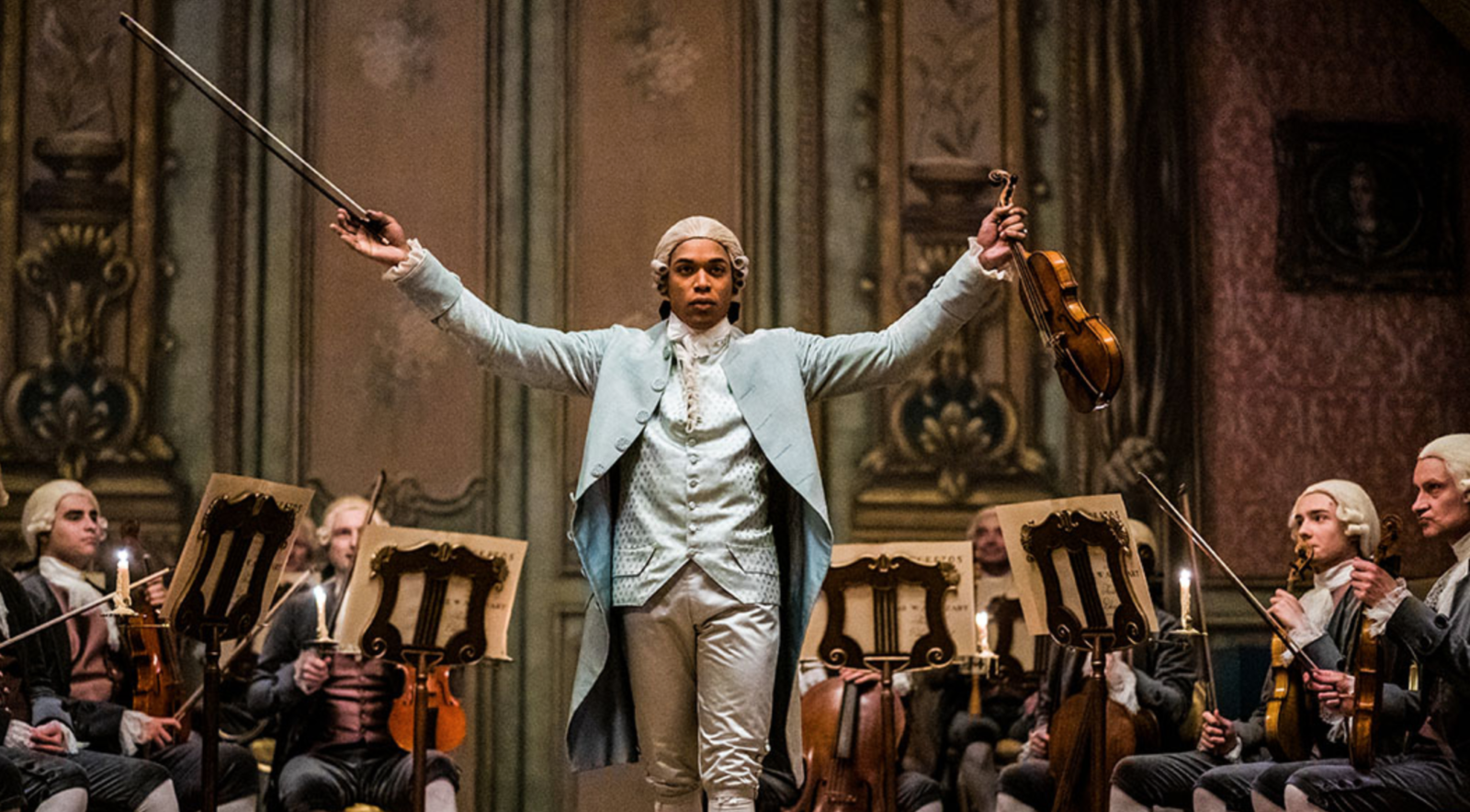 I asked Stefani Robinson about Chevalier during an interview for her work on Atlanta. She was extremely excited. As she told me the story, my first thought was, “I hope this gives Black Amadeus.” So, you can imagine my joy when the first scene of Robinson’s new film, Chevalier, was a play-off between Wolfgang Amadeus Mozart and royal court fave Joseph Bologne, who became the Chevalier de Saint-Georges.

Son of a wealthy French land (and people) owner and a Caribbean slave, Bologne was sent to a fancy conservatory in France. There he honed his already formidable music skills with Francois-Joseph Gossec and trained to be a “man-at-arms” for the King. Bologne was a gifted fencer and became friends with King Louis and the infamous Queen Marie Antoinette.

Robinson was interested in the Chevalier when, as a child, her mother gifted her a book about the forgotten figure. For this life to be so eventful and impactful on French history, Robinson was shocked that she’d never heard of him. She began writing a script, and it held a special place in her heart until she could pitch it to be made.

It’s a story that’s mostly triumphant, and yet, baffling. Robinson is quick not to claim this as a biopic since many events were approximated. There simply wasn’t much information, and, of course, the cause was one that most of us are familiar with: racism.

Two years after Bologne’s death, Napoleon Bonaparte reinstated slavery in the islands of France. This led to the destruction of Bologne’s character and much of his music. This had to do with him being the descendant of slaves, and the part he played in the French Revolution.

This leads us to a film that seeks to represent different milestones in his eclectic life. It must have been hard to choose, and Robinson did a good job — though if I had to describe what the film was about, I may be a little hard-pressed. Is it an underdog story? Is it a love story? Is it about staying true to your authentic self or honoring the traditions of your ancestors? The film is full of themes that can make it feel overwhelming. While there was occasional levity in the script, it missed the fun factor to balance out some of the melodrama.

I mentioned Amadeus, whose tension was based on competition and the wily personality of the subject. In this, Chevalier is reserved, if not arrogant. He is cocky but only shows off when dueling or playing music. He’s not so much of a cad or a womanizer, but simply a member of the French court for whom these extravagances are readily available. The opening scene is the most dynamic and one of the few that show the edges of Bologne’s personality. I just felt there was a looseness missing in the narrative.

That said, it was still engaging. Every scene had relevance and was important to move the film forward. The thoughtfulness of the script, the direction by Stephen Williams, and the gorgeous cast make this a movie worth the watch.

Kelvin Harrison Jr. starred in Waves and was named a TIFF Rising Star in 2019. His portrayal of the Chevalier is breathtaking and inspired. He accurately portrays the oxymoronic nature of Chevalier’s life. He grew up in aristocratic French society, but when he is reunited with his mother, who was freed after his father’s passing, the true nature of his culture shock is beautifully shown.

The supporting cast includes a woefully underused Minnie Driver as La Guimard, an aging Diva who causes trouble for the Chevalier, and Samara Weaving as Marie-Josephine. I was also partial to Lucy Boynton’s Marie Antoinette and want to make special mention of Ronke Adekoluejo’s Nanon, Boloogne’s mother. She serves as an anchor for Chevalier and and inspiration for some of his differing political views toward the end of his life. Adekoluejo brings an austere nature to the role. You can feel the love and care she has for Bologne.

I would have preferred more attention to be given to Bologne’s activities during and after the French revolution. Currently, the bulk of his storyline isn’t so much about him as it is his illicit affair with Weaving’s Marie-Josephine. I believe in the importance of that story — especially Bologne’s explanation that engaging in marriage with someone from his world would be illegal, and someone from his culture would cause him to lose his station. It’s an interesting wrinkle that adds context to his desire for forbidden fruit. This scene elevated my perception of Bologne’s character.

Overall, Chevalier is a solid reimagining of the life of a figure lost to racism and time. It shows a respectful and well-rounded version of the man while sparking enough curiosity to spur further research.