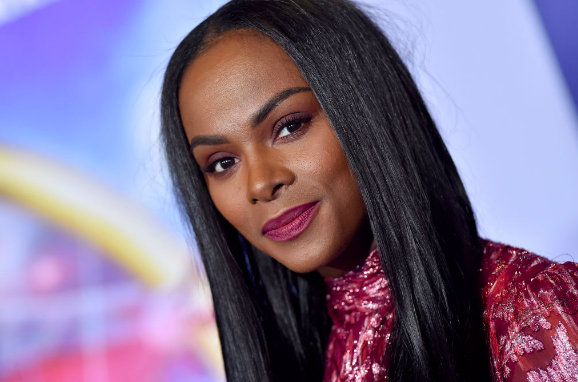 Tika Sumpter’s vibrant personality and warm smile bring the character Alicia Johnson to life in Mixed-ish. As the show tells the story of young Rainbow Johnson from Black-ish, the comedy unpacks deep topics like racial stereotypes and the ambiguity of defining race growing up in the 1980s. Sumpter plays Rainbow’s mother Alicia Johnson with resilience as she navigates the corporate world as a strong Black woman.

Season 2 kicked off on January 26 with Black Pride at the forefront of its message. Why should fans be excited and tune in for the rest of season 2?

Well, fans should tune in because of the Johnson family! Because it’s a lot of fun, but it’s also great messaging. You can watch it as an adult or you can watch it with your kids, whatever. It’s just a good family show. We tackle so many different topics. But now we’re acclimated into where we live and society and what now is going to cross paths with the values that we did have and what values we have now. It’s just a lot of fun, and it creates great conversation for a lot of things that are happening right now in society.

You touched on what’s happening in society right now. So much has happened this past year, with racial justice and COVID-19. As a Black woman in the industry, which is a very white and male-dominated space, how has it been getting acclimated to how things have shifted this past year?

You know, Black women have always raised their voices and had stories to tell. I’m just glad that they’re being amplified and that we’re able to direct our own paths more now. People are more open to allow us in the space. We are creating our own spaces where we can really have some control over the things that we put out there. So I think that’s really important especially in any business but especially in Hollywood. The narratives are usually told without us in the room or by other people so it’s nice that we’re taking that back.

Filming for Season 2 just wrapped. When you guys aren’t tackling these tough conversations on-screen, do you have any fun memories or specific things from this season with filming that was particularly fun behind the scenes?

Seriously, we always have fun! The great thing about this show is even though we’re tackling tough things, it’s with  levity, you know what I mean? We’re not a one-hour drama, we’re a comedy. But we’re also a prequel to Black-ish so obviously we’re going to tackle these conversations. But the great thing about the -ish world is we tackle it with fun and a joke but also like, “Hmm that made me think.” We literally laugh all the time on set, and during COVID we needed it more than ever. When we wrapped I usually don’t cry, but I cried this time because our crew and our cast are so fantastic. I just felt really grateful, through everything that we did by tackling the issues but also having fun on set. Everybody just worked really hard to be safe so I’m really proud.

Lastly, I know that you relate to Alicia in the sense that you are in an interracial marriage, but is there anything else that you’ve learned from this season about the character that you can relate to?

Oh my gosh, there’s so much more than her being just in a relationship with Paul, for sure! Just gaining her own independence and understanding that we love each other but some of my values are going to be different from yours and some of my beliefs are going to be different than yours. We tackle some of that stuff. Just disagreeing and complex conversations how we talk to our children about certain things. When it’s time for you to sit down and when it’s time for me to just be talking and you not talk. When it’s time for you not to hold the space that you think you need to hold. Those are all things I think that a lot of people and especially Black women will be able to lean into.

Fans can watch Season 2 of Mixed-ish Tuesday nights on ABC.