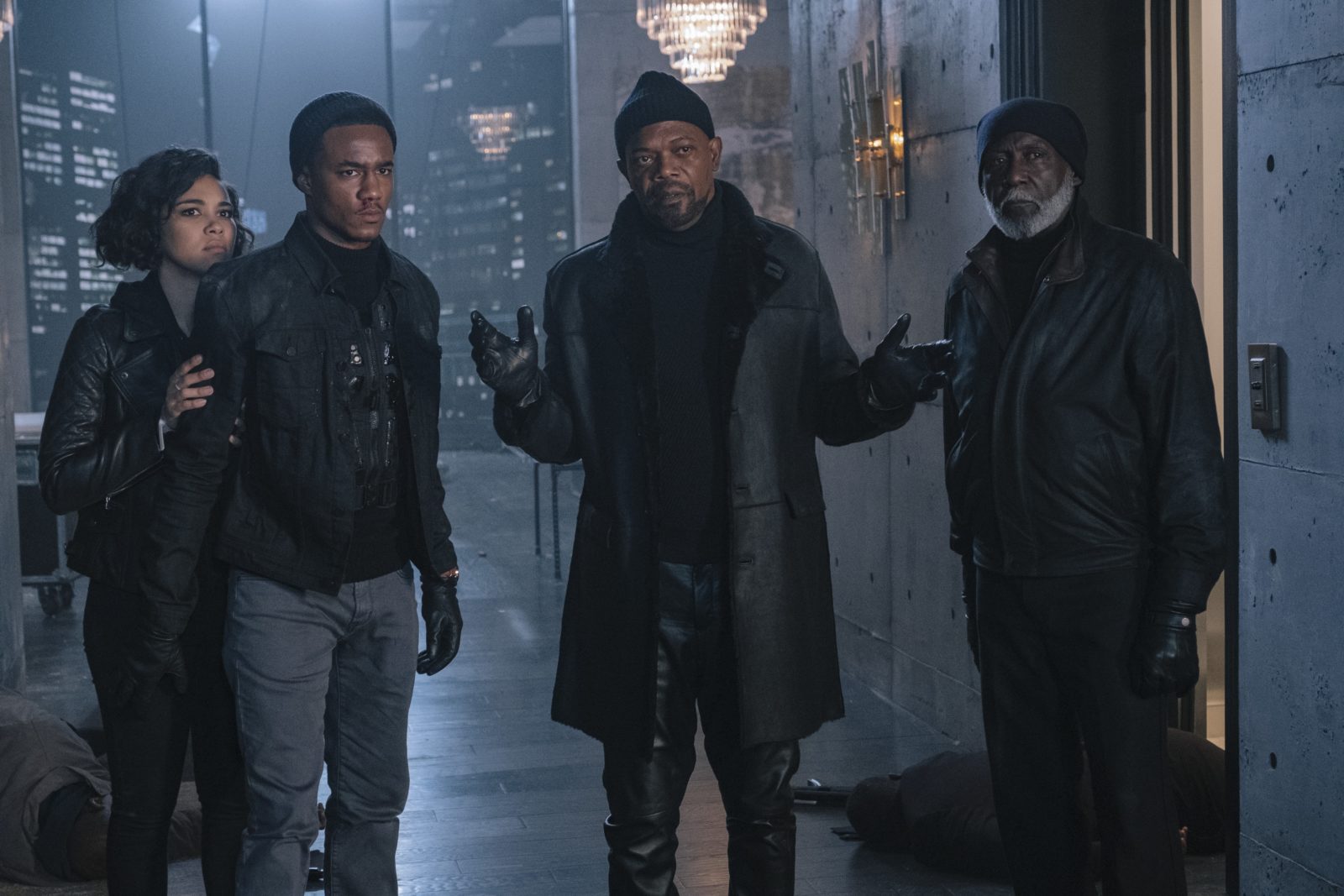 “I would tell this generation to stay ready, and to do the work.” –Richard Roundtree

New Line Cinema’s newest adaptation of Shaft, is back on the big screen in theaters this weekend, but this time around under the direction of Tim Story (Fantastic Four, Think Like A Man, Ride Along), the franchise starring Samuel L. Jackson, Jessie T. Usher, Regina Hall, Richard Roundtree and more has found a brilliant way of combining the “old-school” legacy of Shaft with a “new way” of fighting crime. John Shaft’s no-nonsense, street-style of fighting crime, coupled with JJ’s millennial political-correctness, cyber smarts and sensitive consideration for the humanity in others makes for an interesting, yet dynamic storyline that is sure to have create nostalgia for the original Shaft films, while instilling a newfound respect for the Shaft franchise in newer, millennial audiences. 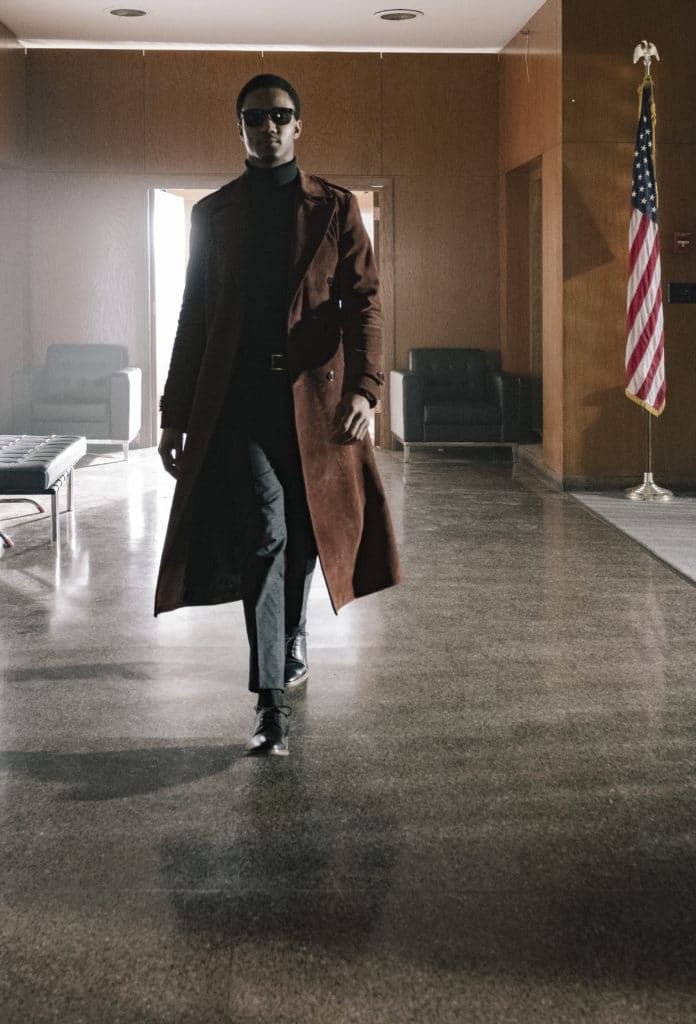 JJ, aka John Shaft Jr. (Jessie T. Usher), is an All-American type who rocks plaid shirts and button down sweaters and just happens to be an extremely articulate cybersecurity expert with a degree from MIT. Yet to uncover the truth behind his best friend’s mysterious death, JJ needs an education only the streets can provide. JJ intuitively decides to pursue his father who he’s estranged from since he was a baby. Absent throughout JJ’s youth, the legendary John Shaft (Samuel L. Jackson) has never had an interest in working for “the man”, but he agrees to help his progeny navigate Harlem’s streets. While JJ’s own FBI analyst’s badge and rule-following methodology may clash with his dad’s trademark leather coat and style of handling business on the streets, there’s no denying that the generational connectivity and Shaft legacy has been passed on to JJ. Besides, Shaft’s got an agenda of his own, and a score to settle that’s professional and personal.

On The Film’s Intergenerational Theme

While director Tim Story has had his fair share of blockbuster hits, he wanted to be careful to handle the Shaft legacy with great care. He wanted to make sure that the: soundtrack, the wardrobe and the balanced narrative of the film flowed cohesively.

On the theme of intergenerational legacy and providing a balanced narrative for elder Shaft fans and a new millennial audience, Story states “I was very deliberate with it [the intergenerational theme]. I knew that if this movie was to be successful, it would mean that we have created a conversation between the generations on everything from manhood to the way you’re supposed to interact with women. I just knew that if we had a conversation between the generations that it would make for a fun kind of adventure. It was specific, and we wanted to find a balance so that Samuel Jackson could still be the ‘Shaft’ that we know, say what he wanted to say, and remain unapologetically edgy. Yet, balance those attitudes and perceptions, and have them be combatted by Regina Hall’s Maya or the millennial persona of JJ. As long as those ideals are being combatted we knew that it would make for great conversation and debate.”

Veteran actor Richard Roundtree makes a return in Story’s Shaft and as the elder Shaft, he is as smooth as they come and definitely has not lost his penchant for handling business in the streets. Of the difference between the old school way of doing things versus the new school, Roundtree states, “No matter your generation. Stay ready. There is a scene where my grandson and son come to visit me. They ask if they can borrow some guns. They open up a back closet, and every gun imaginable is store there. I would tell this generation to stay ready.” When thinking back on the difference between the millennial generation and his and Samuel Jackson’s generation, Roundtree candidly quips “When I listen to Sam’s generation of actors, these are guys who have taken the time and gotten the schooling and really learned the craft. And they are so well read, well educated and have gotten life experiences that have served them. I went to college with an aim to be a football player, and that’s all good, but get your education first. Get that degree!” He asserts that “This generation must get their education and do the work.”

On his role of JJ, Usher admits that he has found JJ to be a very rewarding character. He admonishes that playing against stereotypes is the most challenging and fulfilling.“My dad is super mellow, and very well spoken. Both of my parents are, and I grew up in private school. I like a challenge and I feel like intelligent characters are more challenging. It’s easy to be a thug on television. It’s not so easy to be an MIT graduate, because it’s not shown as frequently. It’s nice. It’s a nice, refreshing change.”

Additionally, Usher admits that director Tim Story was a prototype that he modeled JJ after as well. “To be honest with you, it was nice to have Tim Story by my side, because Tim carries himself as if he is that person. He’s liberal, yet still very sensitive to the difference of others. We’re both very sensitive. I feel like a lot of where my data came from, was him. Although, he’s of a different generation– the way he carries himself, the way he dresses, the way he treats and speaks to women. He’s a very respectfully man, especially in this day and age.”

On lessons that he’s learned from working on set with Samuel L Jackson, Usher’s face lights up as he states, “Sam has a level of professionalism that I’ve never ever seen before. I’ve never seen someone with eyes in the back of their head on set the way Samuel Jackson does. He’s not necessarily demanding, but he raises the bar and has a level of standards that are as high because he’s so professional. When he steps on set, you have to do the same. I mean Sam walks on set from rehearsal and he not only knows his lines but he knows mine and yours as well as the shots.

From Story’s perspective, JJ was everything that he was looking for in a young Shaft. Of Usher, story states, He gave me exactly the innocence that I was looking for. Jesse has this innocence about him, but he’s also extremely smart and very savvy. He’s even very athletic. All of the stuff that he was doing with the Capoeira fighting scenes, Jesse had done that stuff before. I found in him as an actor, the same qualities that I needed in JJ. That he would be able to grow up on-screen and become a version of Shaft that we would like, yet that would also be different from Roundtree or Jackson. He just gave me everything I wanted in JJ, and I had to have him be a part of the project.”