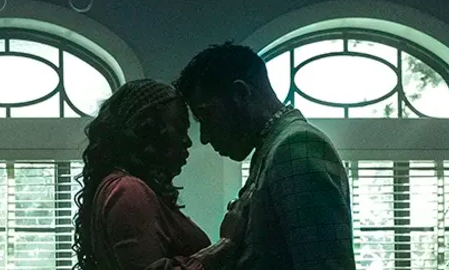 We’re pleased to offer you the musical stylings of Orlando Jones this New Year’s Eve with a brand new playlist for 2020.

Let’s take a ride. Will you ride with me? Will you ride for me?” Bilquis didn’t respond. Ibis filled the silence with another careless whisper, “You are a Rose In Harlem.” “This isn’t Harlem. We are worlds away from that place.” She inhaled deeply, “My sister is happy.” Bilquis was holding something inside her that made her skin luminescent. It glowed like black gold. Ibis watched her, transfixed. He hung on her every word from the noose inside his head and swung back on familiar things. “You disappeared, for weeks. Where did you go? Where’s Nancy?”

“Take A Number, Why Don’t You? (Mr.) World asked the same question, so did Wednesday.

There is no Us between me — and ANY of you.”

“Can We Pretend?” The question slipped from his slips too easily. “Have you ever seen Nancy shapeshift? He transitioned into a female spider right in front of me. Her tentacles formed an Asase Ye Duru. My sister’s symbol.” Ibis, “I would have killed Anansi long ago but for his mother. His father sees him for who he truly is but The Goddess of Goddess dotes on her son. Rumor has it, it’s Really Love. I’m told he often keeps her Warm On A Cold Night.

A Cheshire Cat grin formed on Bilquis’s face. “Feels Like, you’ve forgotten how true love feels. I’m going to teach how to LOVE AGAIN… (Ibis swallowed his thirsty smile) “…or be leftovers. Sometimes love the second time around is fresh… but most of the time, it tastes like Leftovers.”

Ibis chirped, “Ooowee. Bilquist turned her head Sideways and leaned in, “I Wasn’t Looking for this.

Sensing danger Ibis cried out “Have Mercy, your majesty I meant no offense?” Bilquis smiled warmly, “I Idolize You, Slave.” Fate Added The Bassline Feeling Good in Jardin d’hiver She saw The Look of Love in his eyes. That hastened his demise.

The decision to consume another being rested solely with Bilquis. She spoke French Fighting Suspicions as she pulled Ibis deeper inside and Danced Him To The End Of Love.

“Talk to Me!” he screeched realizing his fate. “You will be confined to the European quarters of the nebula where treacherous nobility who challenged my throne long ago, still reside.

Defiant Ibis reasoned, “I am already a Black Man In A White World! That is not a punishment for me.”

“Living the American Dream is life with too much cream in Black Coffee.” Bilquis quipped.
“Don’t get Carried Away your Majesty. I meant no disrespect to your family.” Bilquis, shook, rumbled and shapeshifted. Quiet Nights Of Quiet Stars trembled as one God Surrendered to another. A beautiful female spider jumps and fires two webs forward at an angle and one backward and exclaims “That’s just how I feel!”. Creating a slingshot that launches Anansi into flight as her tentacles turn a Y web formation into a V. Grains de Beaute of what was once a deity fall as the trickster God flies away. Bilquis was never there. Nancy was up to his old tricks again. This time, he not only cheated death — he killed Him.

You can follow the BGN Playlist on Spotify here.