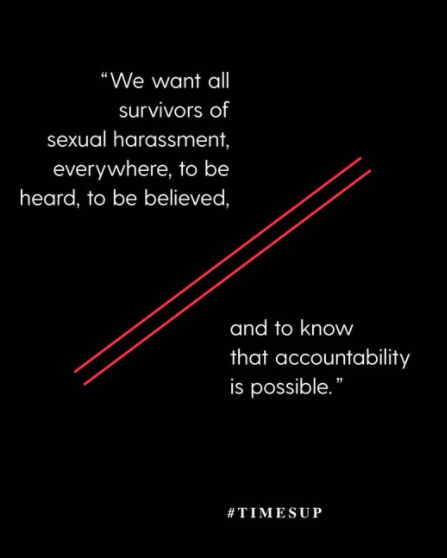 The new year brings new change to women in the entertainment industry and it was announced today that a new legal defense fund has launched to help fight the sexual abuse of power and sexual harassment in the workplace as it relates to many women—especially women of color, from being safe and reaching their full potential in their careers.

According to a press release that came out today:

TIME’S UP is a central hub supporting a wide range of initiatives aimed at promoting equality and safety in the workplace. In addition to the TIME’S UP Legal Defense Fund, TIME’S UP initiatives cover legislation, corporate policy, hiring practices and aggregating important resources. TIME’S UP is comprised of many working groups that focus on tackling these issues from various angles.

“Earning a living should not come at the cost of anyone’s safety, dignity or morale,” said Shonda Rhimes. “Every person should get to work in an environment free from abuse, assault and discrimination. It’s well past time to change the culture of the environment where most of us spend the majority of our day — the work place. 51% of our population is female, over 30% of our population is of color. Those are important, vital, economically powerfully voices that need to be heard at every level. TIME’S UP is working to make sure the people walking the corridors of power within the workplace and in politics truly reflect the full mix of America – the real America that looks like and includes all of us. Look, this isn’t going to be easy but it is right. And fighting for what is right can seem hard. But letting what is wrong become normal is not easier — it is just more shameful.”

On social media came various tweets from Rhimes and many other influential women in media speaking out and for the TIME’S UP Legal Defense Fund campaign.

Time’s up on silence. Time’s up on waiting. Time’s up on tolerating discrimination, harassment and abuse. #TimesUp Sign the solidarity letter & donate to the @TIMESUPNW Legal Defense Fund: https://t.co/eTwKtOboIl pic.twitter.com/q8aok1HTGg

From the wonderfully brave women of the farmer’s union to these incredible strong women of entertainment. Take the time to read. It’s worth it. We are one tribe, standing in solidarity now. #TimesUp https://t.co/Dy6IBxyzOh

These donations from all of you are wrecking me ????. THANK YOU for standing up to say: #TIMESUP – The @TIMESUPNW Legal Defense Fund provides subsidized legal support across industries to those who have experienced sexual harassment, assault, or abuse: https://t.co/bvd371K7Pf pic.twitter.com/WfVR6DJxOX

In addition to the TIME’S UP Legal Defense Fund and the Commission, TIME’S UP is also working closely with 5050by2020, believing a shift in power and leadership is imperative to make change. The group is advocating for a 50/50 model where women are equally represented at every level—especially in leadership positions and positions of power. 5050by2020 has already received commitments for gender parity by 2020 from leaders in the industry including Creative Artist Agency (CAA) and ICM Partners (ICM).

TIME’S UP has received the support and backing of numerous attorneys, activists, public relations professionals, companies, and celebrities, who all stand ready to help.

To learn more about TIME’S UP, please visit www.timesupnow.com. To donate to the TIME’S UP Legal Defense Fund, please click here. To view a full list of founding donors, please visit https://www.gofundme.com/timesup.