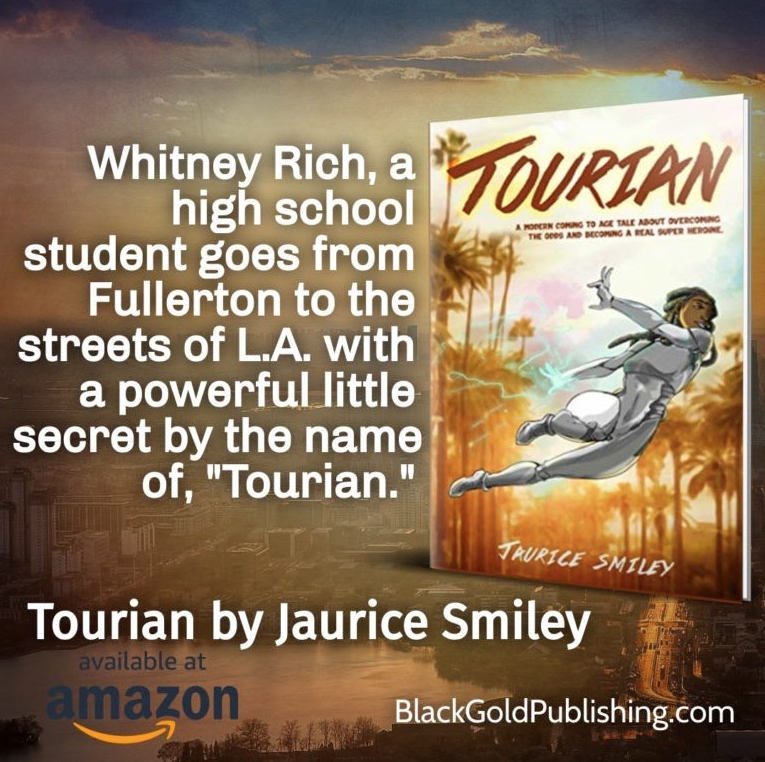 Jaurice Smiley’s Tourian mixes superhero fiction and the current racial climate in the United States to depict a teen superheroine who uses her passion for the justice system and law to fight both her real-life battles and unearthly battles.

In Tourian, the protagonist Whitney Rich faces suspension when she and her friends get into a fight at her LA high school. Being an aspiring lawyer and having a strong disdain for social injustice, Whitney feels that the root of her lengthy suspension is derived from a prejudiced principal and ultimately a racist institution. This is something she and Tourian, her superhero alter-ego, incorporate into her unearthly life. Through the guise of the hero Tourian, Whitney learns to challenge her insecurities, her love life, and the current institution.

Smiley took a turn with his work that other superhero fiction works don’t seek to take. He uses current events that are challenging in society as the basis of the protagonist’s battles. Racial injustice and the fight against racism are on the rise in the United States. With heightened protests for equality, and victims negatively affected in large numbers, it’s no doubt that there is not equality and justice as there needs to be.

Throughout Tourian, Whitney expresses her knowledge by using examples of past legal cases to get through the literal trials and tribulations in her life. Other works of fiction depicting superheroes tend to focus on fictionalizing a large percentage of the crimes or battles the protagonist must conquer. Whitney fights typical crimes fought in speculative fiction, but her crimes contain a mixture of modern-day issues.

What’s unique is Whitney’s ability to fight for two problems at once. She fights for racial equality in her school system and fights to protect those in Tourian’s world. When Whitney learns that Tourian views her friends as the enemy, her way of life is ultimately challenged because she is now fighting against herself or her own world.

How can Whitney fight rightfully against a racist system that punishes the victims who fight rather than the aggressor? This seems to be Whitney’s greatest question when she learns that she may have been on the wrong side all along.

Referring back to current events, as protests take place and the demand for overall justice continues, people often find themselves taking measures into their own hands to make themselves heard. Those who do so often find themselves facing repercussions even though their hearts are in the right place, contrary to their actions. Much like today, Whitney originally fights to defend her friends but faces repercussions afterward even harsher than her aggressors. It takes the Tourian in her to realize that violence may not always win.

So, does the parallel between current events and superhero fiction work?

As the story concludes, Whitney relates her conflicts in life to the battles she must overcome as Tourian. She confronts the high school principal she deems as a racist and confronts her friends with unearthly world views as the gang to avoid. Using this parallel serves as an effective way to connect current events to a fictional story. This method helps strengthen the protagonist’s background as a Black youth who is the subject of an oppressive system.

What makes this parallel work and creates a strong rather than a weak narrative is that Whitney and her friends get the justice they deserve. They do not become another statistic in society or become defeated. Smiley refrains from allowing the superhero characters he depicts to fall into racial stereotypes when he creates the parallel between social injustices and fictional battles. Although the characters in his book fall victim to racial discrimination, the author does not define his characters with stereotypes.

Whitney is a confident student and exhibits leadership abilities. Although the opening of the book begins with a fight, as the story progresses Smiley doesn’t characterize Whitney as being a hostile or violent individual. Instead, the author allows for Whitney to channel her aggression into her superhero persona. All of the assertiveness and aggression against her bullies, which one would think would make Whitney fit into the “angry Black woman” stereotype, instead allows for her to become a successful heroine. She channels her rage, assertiveness, and defensiveness by standing up for her friends and ultimately proving that the system is the problem.

Though a simple read, Tourian has the potential to reinvent what it means to be a superhero. This story challenges both the ideal image of a superhero figure and adds significant societal issues like racial injustice and discrimination using a fictional story as the basis to give a voice to the voiceless. At the end of the read, Tourian is finally heard and Whitney and her classmates get justice.

Tourian is now available for purchase at Amazon.