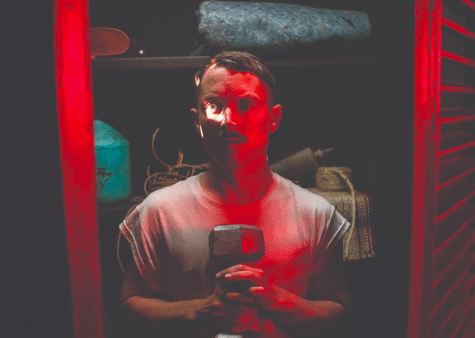 “The sins of the father are to be laid upon the children.”
~William Shakespeare, The Merchant of Venice

After his father abandoned him when he was five years old, Norval Greenwood (Elijah Wood) receives what feels like a sincere missive with an invitation to visit long-departed daddy in his oceanside home. Norval is down on his luck and with his mom’s blessing, decides to make the trek like Little Red Riding Hood through fields and across water to his father’s remote cliff-top cabin in the Pacific Northwest. But when he arrives, his father Brian (Stephen McHattie) does not seem even slightly happy to see him and instead treats him like an unwanted intruder. Confused and hurt, Norval tries to connect with his dad as best he can to surprising results in first-time director and long-time genre producer Ant Timpson’s Come To Daddy, premiering at Tribeca film festival this week.

Norval first tries to make his life in Los Angeles sound glamorous. He has a limited edition gold iPhone designed by Lorde. “They only made 20 of them!” he exclaims when his dad accidentally drops the phone over the rail and into the ocean. He further tries to impress the man who left him and his mother with stories about being a DJ, music producer, piano player, and all-around well-connected Los Angelite. “I count Kendrick Lamar and Chance the Rapper as my close allies,” Norval boasts. To which his dad responds in a snarl, “Anybody I might have heard of?” only to expose Norval’s name-dropping as a lie in the cruelest way.

But that’s not the only attempt that the estranged son makes to connect with his father. He also confesses that he’s been in recovery for alcohol addiction and even tried to kill himself one night when too drunk. Brian responds by pouring half a bottle of wine in a glass and drinking it down. “Tempted?” he taunts his son. Norval says he isn’t, but the look on his face through Elijah Wood’s sublimely expressive eyes indicates otherwise.

Brian’s violence toward his son only escalates. When Norval decides he’s had enough of the verbal, physical, and emotional abuse he asks his father why he invited him there at all when he’s clearly a drunk who hates him. Brian has no answer. And instead tries to kill Norval with a meat cleaver, stopped only by a heart attack that takes Brian’s life.

An already surreal situation gets more so when the local morgue is filled to capacity and Brian’s body needs to be returned to the cabin while Norval and his mom make arrangements for it. With hints of Edgar Allen Poe’s The Tell-Tale Heart, Norval begins hearing strange things around the house and is convinced he’s either losing his mind or his father’s ghost is tormenting him. As Norval’s madness leads to him drinking again, he discovers that his father was keeping some pretty disturbing secrets that now Norval will have to contend with, once again with his life at risk.

What begins as a family drama descends into a special circle of hell as Come To Daddy ramps up the tension over this taut hour-and-a-half. Normally I’m not a fan of jump scares — usually they indicate lazy creativity — but in Come To Daddy director Ant Timpson has elevated these to the level of art. The close camera angles on Wood’s open-book face as horrors take place around him work beautifully to heighten the plot as well as Wood’s bloodiest performance since Maniac. The menacing tone of the film is also heightened by the superb sound and lighting design as we join Norval Greenwood while he’s forced to confront his childhood trauma as well as his father’s ghosts. Some of which might not be as dead as they seemed.

In particular, I appreciated the Shakespearean theme of the sins of fathers laid on their children. Norval never got over his father’s abandonment even after three decades, and his stunted adulthood is a direct result. After his father’s death, and being forced to sit in the house with the embalmed corpse, pushes Norval to finally address the rage and grief he’s carried all these years, as well as all the mental illness it has caused from refusing to heal it properly. Or heal his trauma at all, as it would turn out. Norval’s arc is remarkable and enormous, and thanks to Elijah Wood’s ever exceptional work in Come To Daddy the character feels almost too real.

There is so much more I want to say about Come To Daddy, but I cannot without giving away the rug-pulling plot twist. What I will say instead is that with its series of clever homage to Poe, Hitchcock, American Beauty, and M. Night Shyamalan’s entire canon, as well as Mandy-level gore when the film really gets going, Come To Daddy is a unique installment in the family horror and horror thriller sub-genres. A word of warning, though: This one is not for the faint of heart or the easily squeamish.