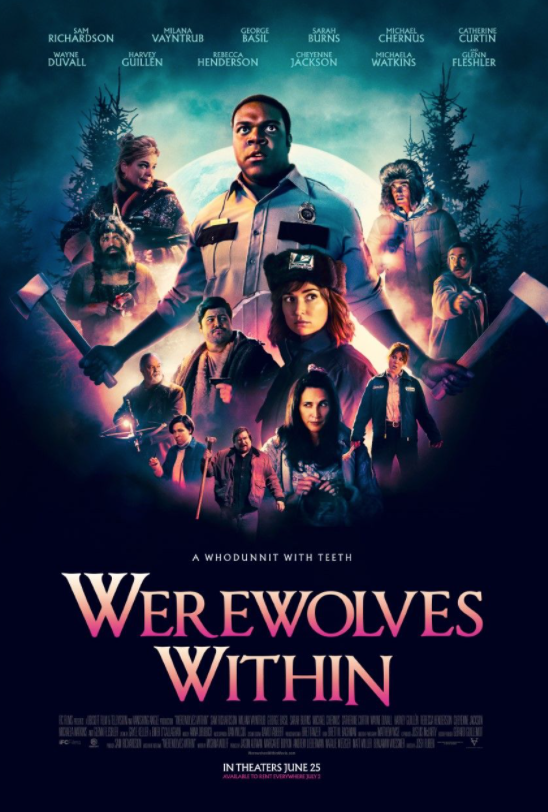 Werewolves Within is based on the virtual reality videogame of the same name. The video game’s storyline is simple. A werewolf has attacked members of a town, and the townspeople come together in the center of town around a crystal ball to deduce who is the person-eating beast. The game gained popularity during the 2020 quarantine and brought people together through virtual reality as they play detective as their favorite avatars. The French-Canadian production company Ubisoft created both the game and the film, and its television and film division has transformed several other of its signature games like Just Dance, Tom Clancy’s The Division, and Assassin’s Creed into feature films.

In Werewolves Within (the film), a new forest ranger Finn (Sam Richardson) arrives in Beavertown. Finn is immediately befriended by Cecily (Milana Vayntrub), a postal worker who seems to know everything about the Beavertown residents, who are all fighting over an oil pipeline proposal from the town’s resident awful corporate rich guy (Wayne Duvall). Finn and Cecily’s budding friendship is interrupted by the disappearance of a small lap dog and the discovery that the husband of innkeeper Jeanine (Catherine Curtin) may have been killed by a werewolf. A snowstorm forces the small community to shelter in place together as they try to discern who is the hungry lycanthrope.

The best thing about this film is that it’s only 97 minutes long. Werewolves Within takes a stab at the horror-comedy genre and entirely misses the mark. It wasn’t funny, it wasn’t scary, and it was annoying. Watching this film was like watching a pet project for a bunch of privileged improv actors who wanted to hang out for a weekend and do a vanity film. Bad art makes everyone tired, and this attempt at comedy leaves the audience exhausted.

Sam Richardson plays the lead character Finn, who seems to be a slightly more intelligent version of the character Richardson played in Veep, Richard Splett, transplanted into Beavertown. Finn seems to only date white women who verbally abuse him for being “too nice.” Watching him bumble wide-eyed through this majority-white cast was just plain sad. It’s a shame that in this day and age, Black actors have to say yes to roles like this that just smack of tokenism.

To its credit, Werewolves Within’s two queer characters are played by openly queer actors, Harvey Guillén and Cheyenne Jackson, who are the only loving couple in the film. The gay couple’s portrayal simultaneously breaks stereotype by placing a pleasantly plump queer Latino male character as happily married to the super hot queer white guy while also reinforcing stereotypes, making both of the gay men flagrantly flamboyant, going for all the easy laugh lines.

Werewolves Within was written by humorist and author Mishna Wolf. Sadly, the jokes were stale, stereotypical, and not funny. The majority of the characters were broadly written and just annoying. The only character worth caring for was the innkeeper Jeanine. Catherine Curtin is a fantastic actor and brings sparkle to every role she embodies. Milana Vayntrub’s Cecily was bland and tiresome. There was zero chemistry between Cecily and Finn, and worst of all, the script was predictable. The audience is always about three or four steps ahead of the story.

The appeal of the game Werewolves Within during the quarantine was that it brought people who were isolated together virtually to experience a “whodunit” in real time. I’m sure there’s a way to translate the excitement of the game into a film, but this was not it. The best parts of this film were the sound design elements. Kudos to the sound department.

Werewolves Within could have learned a thing or two about horror/comedy from the 1996 film Scream, which couples satire and parody to scare audience goers and make them laugh. Scream was a movie that stayed with us after we left the theater. In order for viewers to be afraid in a horror film, they must be invested in the characters. There has to be some kind of emotional bond in order to feel the fear watching as the people on screen face danger. The audience should be rooting for the good people on screen to live and for the bad people to get justifiably taken out by the big scary thing. There aren’t enough reasons to care about the people in Beavertown being eaten by a mythical being. The screenwriting is just plain lazy. Werewolves Within makes the audience just long for the film to be over.

BGN covered the film Werewolves Within for the Tribeca Film festival. The film opens in theaters on June 25, 2021, or on digital platforms or on demand July 2, 2021.

Meet The Cast and Creators of the New Series ‘The Afterparty’