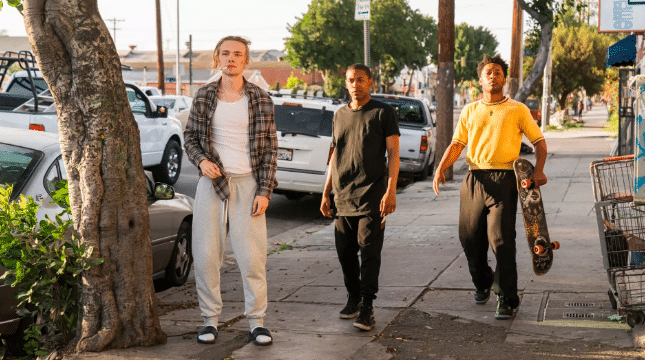 “Sorrow is like treasure. You only show it to your friends.” —Jesse, Gully

In director Nabil Elderkin’s Gully, the truth is not watered down for the comfort of others. The film depicts the harsh reality of three best friends, Calvin (Jacob Lattimore), Nicky (Charlie Plummer), and Jesse (Kelvin Harrison Jr.), who are coming to grips with the generational trauma, abandonment, and the residue of violence that they have inherited from their parents. While two of the friends are Black and one is white, their similarities far outweigh their differences. Traumatized by familial and economic hardships and pressure, these three teenagers form an unbreakable bond. Their bond is not solidified by their ethnicities or their personalities, but rather their pain and intuitive understanding of the pressures that they all experience. Under the direction of Elderkin and with the writing of screenwriter Marcus Guillory, we get to witness a transparent, raw, and gritty film that highlights that stories of human beings whose violence is not the crime, but rather the by-product of their silent pain, sexual abuse, abandonment, and perpetually feeling trapped by circumstances that they can’t control.

Gully brings to light that behind every person deemed a criminal or misfit is a story. In the instances of Calvin, Nicky, and Jesse, they are all reflections of humanity, and the trauma that they’re carrying contributes to them either exploding or, in the case of Jesse (who suffers in alone and silence), imploding. That is, Jesse struggles until Calvin and Nicky find out that something unthinkable has been happening to him for a very long time. Upon this discovery, the trio further lose grip with reality and begin to translate the violence they explore every day as gamers into the real world. They begin to lash out and commit heinous crimes against innocent people without regard for the consequences. 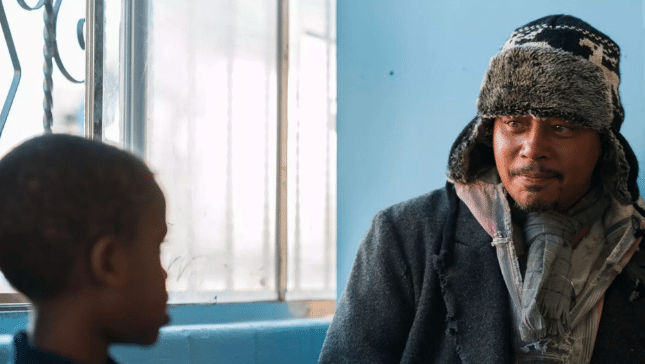 Young, Black, and Gifted, Yet Bleeding

The screenplay is written so well that it’s hard to be critical or pass judgment on these young men. Through a series of flashbacks to each of their personal pasts, we get to witness the root causes that open the door for the actions that they later take in life. All of the young men have an absence of a father in their lives. In the case of Jesse, he’s displaced from both of his parents, and being “kept” by a middle-class white man, Mr. Charlie (John Corbett), who has his own motives. The two young men who have mothers present witness them doing the best they can to raise male children who do not have a father in their lives.

Lattimore as Calvin is the perfect personification of a gifted child tormented by the demons of having witnessed a horrific act against his father. Calvin is extremely brilliant and even scores in the top ten percentile out of his school’s standardized tests, but all of this is masked by a callous, cold demeanor. At one point a school administrator asks Calvin why he entered all D’s for the answers on his recent test, and Calvin prophetically replies, “D for damned.” Yet, this is a young man who speaks Shakespearian iambic pentameter like it’s an afterthought. Yes, he’s young, Black, and gifted, yet he’s bleeding at the core as a result of absorbing the pain of his environment. Lattimore shows great vulnerability, fearlessness, and total commitment in his role as Calvin.

Having A Past and Being Black is Not A Crime

Jonathan Majors as Greg beautifully personifies the power of the human spirit. Majors showcases a great range in his acting skill set with his ability to show resilience and restraint, yet simultaneously conveying pain and arguably some regret for past actions. Despite having had some of the same experiences as: Calvin, Jesse, and Charlie, Greg chooses to change. Greg represents the power to change in this film. Yes, he’s done some things in his past that he’s not proud of, but he decides to start fresh and new. From the arch of his shoulders to the gentle way that he interacted with his onscreen mother, Majors shows a penchant for embracing vulnerability and fearlessness in his approach to acting. In his own way, Greg does what a true mentor is supposed to do, soften the pain of the trials that may surely come. Majors masterfully conveys that having a past and being Black is not a crime.

What makes Gully even more appealing is that it does not just ascribe the traumas that come along with disenfranchisement to the experiences of being young and Black. In this film, we also see the experiences of a poor white kid who is fatherless, too. Nicky lives in the hood, and he know was it is to carry pain. He has a blatant disrespect for his young mother, yet he has his reasons. Nicky has seen some things with his own eyes, and some of it he just can’t shake off. He genuinely loves Calvin and Jesse as if they were brothers. Plummer is so believable as Nicky. He inhabits the role with great ease, and his chemistry with Lattimore and Harrison is palpable. I love the fact that in this film, the screenplay was not written as a trio of three black young men. The presence of a young white man who has also experienced trauma elevates the playing field and further supports that reality that pain, generational trauma, and pressure are universal.

The Unsung Story of Being Young, Black, and “Missing”

When you consider the fact that right here in America, so many young Black men and women go missing and we never hear about it on the news, the story of Jesse becomes so much more compelling. What makes the character Jesse so rich and layered is his silence. His soft-spoken, broken, gentle way of dealing with things carries weight and add much to the narrative of the film. We often see the pain of Black men personified in loud, aggressive characters, so Harrison’s portrayal of Jesse is even more intriguing. With great subtlety, Harrison masterfully speaks so loud by saying so little. His pain, secrets, and reality are so unspeakable that the residue manifests in his very being, encapsulating him and causing him to retreat inside of himself. As he says in the film, he prays for “the peace of mind for the abused and the neglected.” 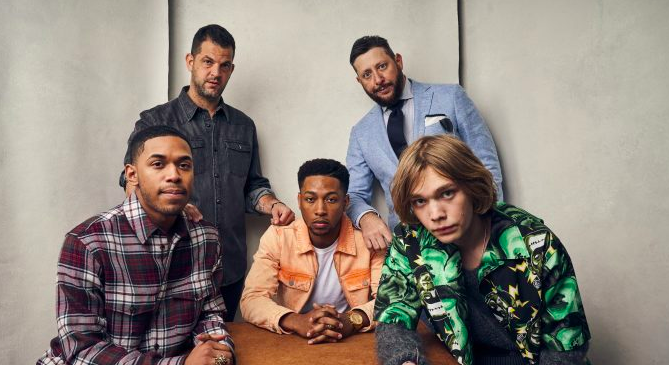 This film’s narration is a great asset as it provides a soft balance to the harsh realities reflected in the film. The strong supporting cast includes: Terrence Howard, Amber Heard, Robin Givens, and John Corbett, along with a cameo by Travis Scott. This film is gritty, honest, and visually unforgettable. A definite must-see!

Gully will screen May 2nd at the Tribeca Film Festival. Tickets and schedule can be found here: https://www.tribecafilm.com/filmguide/gully-2019

Tyrese Gibson and Terrence Howard Star in ‘The System’

‘Gully,’ the Film That Director Nabil Elderkin Had to Make