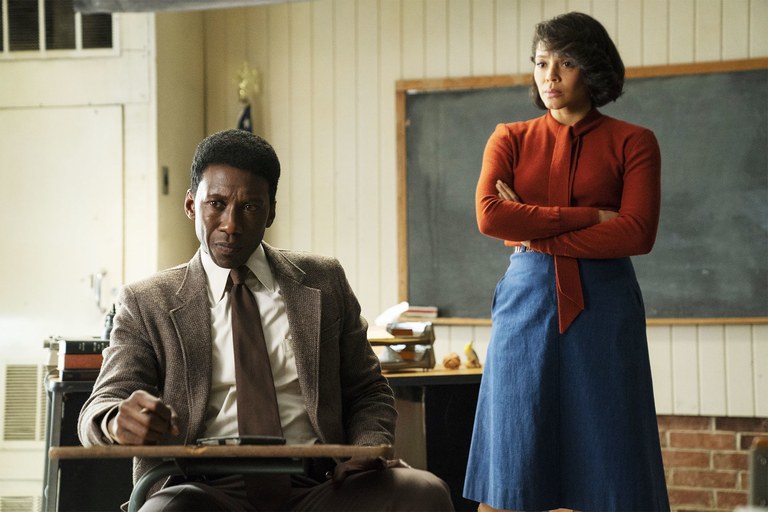 The following contains spoilers for the episode.

Where are Will and Julie? The question is at the center of the mystery that is True Detective, back after a three-year hiatus. In 2014, True Detective became a critical and commercial success with Matthew McConaughey and Woody Harrelson as the leads. Unfortunately, Season 2 did not live up to its predecessors with slumping ratings and a convoluted storyline (sorry, Vince Vaughn). From the first few minutes of this installment of True Detective, it appears the show has captured the magic of its original run.

We open with Wayne Hays, portrayed by the ever alluring Mahershala Ali, a state police detective from Northwest Arkansas with exceptional tracking skills after his time in the Army. Wayne is asked to recall in a deposition the events of November 7, 1980. The faithful day when Will and Julie Purcell, rode their bikes down the road from their home, never to return. The story alters between three different timelines and we are treated to Ali in all of them. First we meet Wayne in 1990 where he testifies about the case in a deposition, then in 1980 while he and his partner Roland West (Stephen Dorff) search for the missing children, and in 2015 as a much older Wayne is interviewed on the Purcell’s disappearance for a True Criminal documentary series.

The pacing is a slow and deliberate set against the backdrop of a cold, dark Arkansas landscape. We follow Wayne and Roland who are quite literally shooting the shit. The two are drinking and firing their guns at helpless woodland creatures when they are called out to the home of Tom Purcell (Scoot McNairy). Tom is distraught, he hasn’t seen his children since he allowed them to ride their bikes to the park and they were supposed to return before dark. The children were last seen riding near Devil’s Den by several members of the community including a few rowdy teenagers in a purple Volkswagen, a Native man known as the “trash-man” salvaging garbage, a young boy who waves at Julie, and an older neighbor out in her front yard. With the emphasis on the onlookers, one could see they will be key-players in piecing together the disappearance on the children.

The two detectives ask to search the Purcell’s home with Tom insisting the neighborhood is canvassed. Wayne, ever the professional, is firmly in control and enter the Purcell’s home. The detectives question the whereabouts of Tom’s wife, Lucy (Mamie Gummer), Tom states he doesn’t know when Lucy comes barging into the home, berating Tom for their missing children. It’s clear for all to see that this is not a “happy” home. As they continue the search of the home, they find copies of Playboy Magazine under Will’s bed and what appears to be a peephole into Julie’s bedroom. We learn that our first suspect is Dan O’Brien, Lucy’s cousin who stayed with them for a time. Is something nefarious happening in the Purcell household?

The following day, Wayne and Ronald visit the local school where they meet Will’s teacher, Amelia (Carmen Ejogo). It’s immediately apparent that Wayne has eyes on the pretty lady and under the guise of using her connection to the children, he manages to get her number. They later interview the teenagers in the purple VW who stories don’t quite add up and search the home of the “trash-man,” Woodard who was not home. As Wayne recalls the events of that day, he is interrupted by son Henry (Ray Fisher) and the True Criminal interview is cute short. We learn that Wayne married Amelia, by 1990 they have two children and Amelia is true crime author with connections to the original 1980 case. Who’s to say that won’t create some tension in their marriage?

Back in 1980, Roland is leading a group of volunteers in the search for the children while Wayne wanders off alone into the woods, putting his tracking skills to use. He finds two straw dolls leading up to a cave and inside discovers the body of Will Purcell. He appears to be almost asleep, atop a stone altar, his hands folded in an angelic prayer. Julie is nowhere to be found, Wayne calls it in and then goes off into the night in search of the vulnerable young girl.

Despite the slow pacing, this season is already setting the tone for an engrossing mystery. Mahershala Ali’s nuanced performance as a haunted man captures the viewer. It’s refreshing to see a man of color take in a position of authority in a world that may not always respect him because of the darker shade of his skin. The story is framed in Wayne’s memories, and we are taken on a ride as we unravel the truth behind the Purcell case. With an outstanding supporting cast, beautiful imagery of the Arkansas landscape, and ongoing investigation of Will’s murder and Julie’s possible kidnapping, True Detective is definitely worth the watch.

True Detective airs on Sundays at 9 p.m. on HBO.