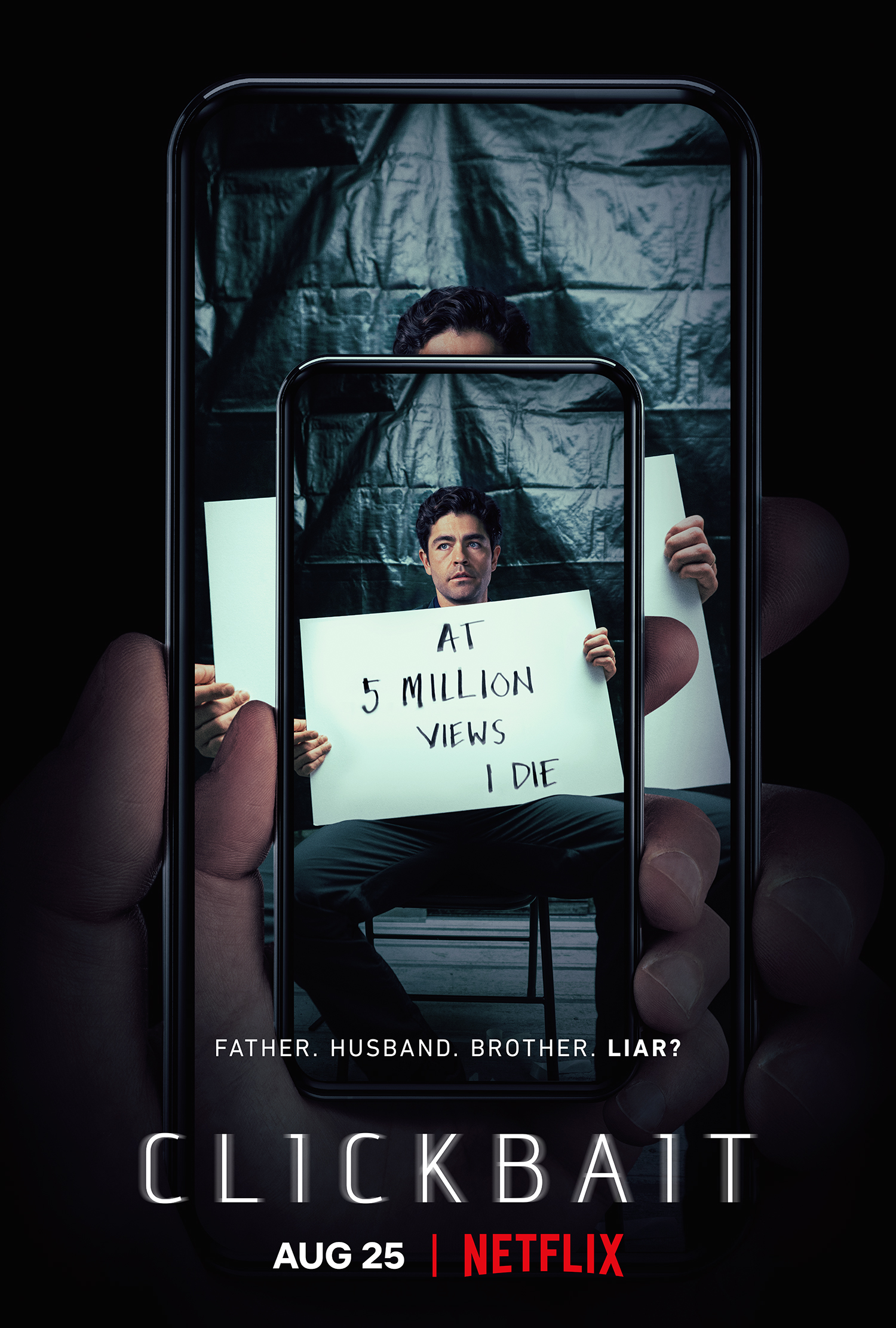 Creator, showrunner, and executive producer Tony Ayres is ready to show the world his latest project about the dark underbelly of social media in this high-stakes drama. The Netflix series Clickbait stars Adrian Grenier as Nick Brewer — a loving father, husband, and brother, who disappears without a trace. Soon thereafter, a video on the internet shows Nick holding a card that says, “I abuse women. At 5 million views, I die.” Is this a threat or confession? Or both?

Brewer’s sister (Zoe Kazan) and wife (Betty Gabriel) in this thriller rush to find out what happened and, most importantly, are desperate to get Nick back home safe. The lines of real-life personas and virtual narratives are blurred in this eight-episode limited series.

BGN interviewed Clickbait‘s creator Tony Ayres via email about the impending series and the kind of impact the internet today has on social media users.

What’s stunning about this series is Clickbait “baits” you from one episode to the next. It’s perfect for Netflix because you can’t stop watching.  Was that the plan all along when filming this? To keep viewers engaged in that way so that they easily binge?

Netflix was super keen to have a show that was propulsive from the get-go, and we were always encouraged to lean into that in developing the show. I think it was a good note because there is so much content in the world these days that you really need to earn your keep as storytellers. As well, the show has a metanarrative about the production and consumption of crime as entertainment so that the forward-driving story engine speaks to our key themes.

Spreading false information online has become all too common these days and once things go viral it’s very hard for one to prove their innocence. Why do you think the culture of the internet has manifested the way it has today, with clicks being used at the expense of others?

Unfortunately, the business model of some social media platforms such as Twitter emphasizes outrage and division, which we’ve seen play out in many ways over the past few years. It’s been proven that provocation engages people emotionally so it’s rewarded by “clicks” and “likes” —and what’s more provocative than making an accusation? As well, there is an epistemological fracture these days where people no longer gather their information from the same sources, so people are often not even speaking the same language when they shout at each other, all behind the veil of apparent anonymity. I think that’s the base-level contribution that the internet has made to our society becoming more polarized.

When you were conceptualizing the elements of this series from the plot, the character development, and its themes, I can only imagine you in the writers’ room looking like the Pepe Silvia meme from It’s Always Sunny in Philadelphia. Did it get that conspiratorial for you when developing these storylines?

Every character has a backstory in this series, and it’s so complex that you have doubts about everyone’s guilt and/or innocence. What was the most intriguing character for you when working on this and why?

I guess Emma [Jessica Collins] is the most intriguing character because you get the feeling that she has her own secret, which is not revealed in her episode but which has a seismic effect on the lives of everyone in the story. I’m not sure if I would say that I’m “intrigued” by any of the other characters, insofar as I feel I understand them pretty well. Like any creator, I have a great affection for my characters, in particular, Sophie Brewer, played by the incomparable Betty Gabriel, who has the biggest emotional arc of any character in the series.

I had made a TV show called The Slap a decade ago using the same technique of a revolving point of view, although the central incident was much smaller and more domestic. Since then, I’ve always loved this format and was intrigued to see what would happen if we turbocharged it with a big and mysterious crime. To be honest, it’s a format with a very high degree of difficulty because you have to keep moving the central story forward with each new point of view, whilst revealing something new in that story arc. Simultaneously you have to create a satisfying narrative for the central character of every particular episode whilst also forward progressing the stories of the other characters we have met in earlier episodes. In spite of all of these challenges, it’s very satisfying to try to plot a show this way because it feels like a fresh take on a tried and true genre.

Has working on this series helped you learn more about the psychology of how people use social media and the impact it has on their lives? If so, how?

For a while now, I’ve been fascinated by the impact that social media and the internet has had upon our lives. It’s a subject I return to recurringly. In developing Clickbait, I had many conversations with my co-creator Christian White and the whole writing team about the way that we are all increasingly fractured in terms of how we see ourselves and how we present ourselves to the world. This has always been the case; we have always had co-existing “selves” — our professional self, our social self, our private self, etc. However, now we are having to deal with an even greater multiplicity of competing identities. There’s how we curate ourselves on Instagram, Facebook, Twitter, TikTok. There’s our browser histories and our YouTube searches, which often reveal other aspects of our needs and urges. It’s getting more complicated and messier, which is great territory for drama!