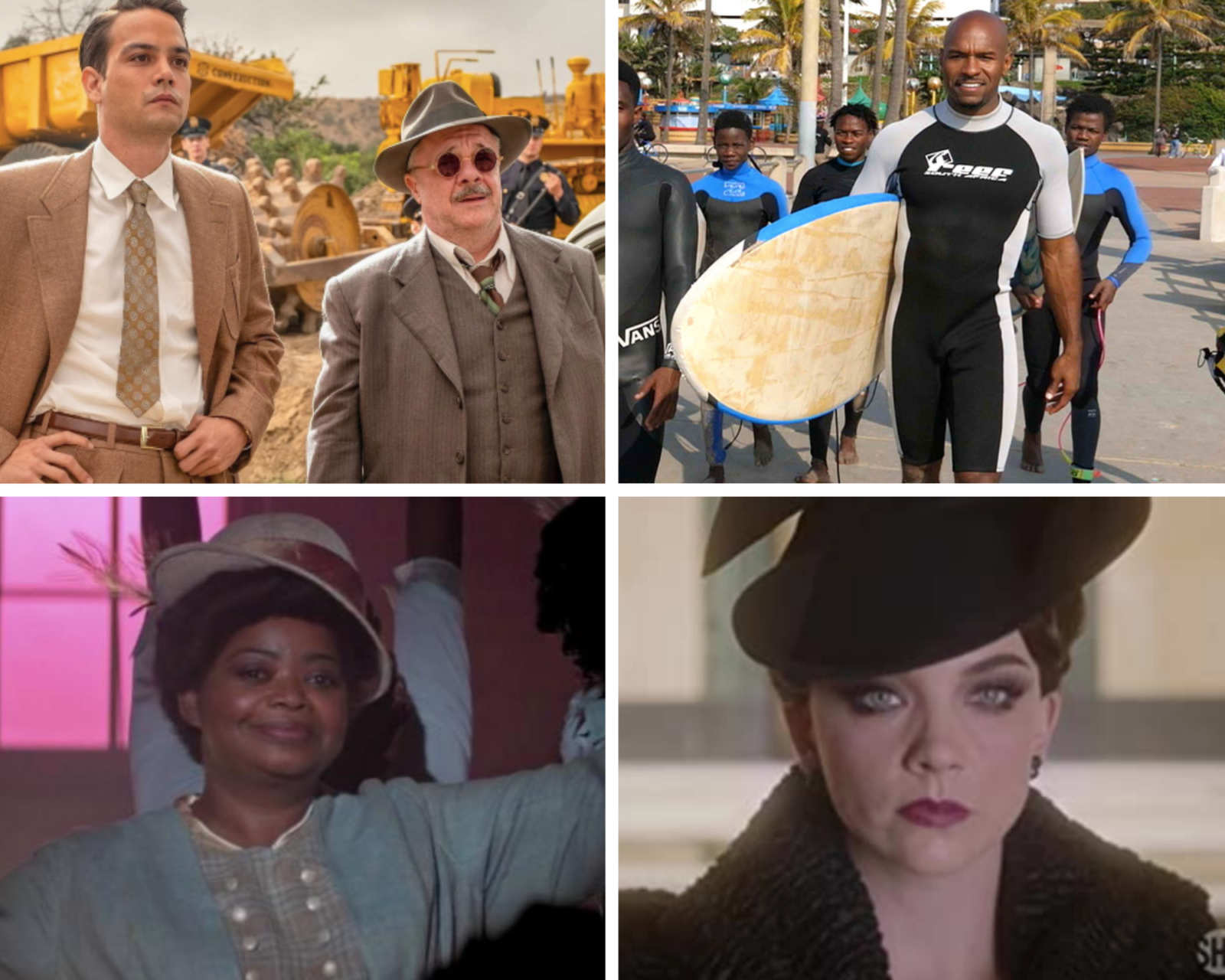 Hollywood TV and movie productions have shut down but so far there’s still plenty of backup for you to stream and check out.

Some are already streaming and some are out next month. BGN gives the rundown.

The third season has been streaming on Hulu, Netflix, YouTube, and even Amazon Prime, but if for any reason you’ve been under a rock or just putting in too much work time, this one is worth a look.

NBC’s Good Girls started out as a dramedy but quickly turned. Three suburban moms (Christina Hendricks, Retta, and Mae Whitman) rob a supermarket to pay their bills and seemingly get away with it. As the audience knows, that one robbery should have been enough, but there would not be series without all that came next. Bit by bit the women’s lives spiral out of control as they try to stop a Pandora’s-box–load of danger from the criminals and the law, not to mention trying to protect their families.

What’s good about this series is not the familiarity of the post-2008 need for money but what each character learns about their fractured relationships.

Based on Celeste Ng’s New York Times bestseller, Hulu’s Little Fires Everywhere with Kerry Washington and Reese Witherspoon is reminiscent of those classic Hollywood women’s pictures back in the day: two female protagonists square off and find they have some things in common. But these observations are only the beginning. One woman (Witherspoon) is white upper-middle class, with an office job and all the advantages and privileges she never even had to think about, while the other is Black, an artist, financially struggling, and fully aware of her disadvantages.

In writing the book, Ng sought to shine a light on her actual hometown of Shaker Heights, Ohio, a twentieth-century planned community whose caveat was to be inclusive and diverse long before these became buzzwords.

Hulu’s production stays close to that so viewers can expect to see a series with few character or plot nuances left out. What makes Fires interesting is that the audience (and readers of the book) get to see everyone possess both bad and good intentions, leaving the moral issues in the eye of the beholder.

The minute you tune in, you know something life-changing is going to happen, and Acorn TV’s Deadwater Fall doesn’t disappoint if you like murder dramas with many twists. Two married couples and best friends  (David Tennant, Anna Madeley, Cush Jumbo, and Matthew McNulty) living in an idyllic village in Scotland are hit with a horrendous tragedy, and from there, everything that you think you know gets turned upside down as police investigate and (dare we say) suspicions mount.

David Tennant, so evil as Kilgrave in Marvel’s Jessica Jones and so popular in his Dr. Who role, once again gets to show off his UK acting cred as the village doctor. The Good Wife and The Good Fight’s Cush Jumbo is on point as the friend who slowly comes to believe everything is not as it seems. Or maybe it is?

There has been some criticism of the need to make a series out of a very popular movie that starred John Cusack and Lisa Bonet, with Cusack’s lead role now being played by Bonet’s daughter Zoe Kravitz.

What makes this good is that this sort of romantic situation never gets old.

Hulu’s original series High Fidelity isn’t just an extraordinary playlist of every hit song from way back when, nor is it stunt casting to have Kravitz in the role. Nah, High Fidelity is for anyone who has ever broken up with someone and had it mess with your self-esteem so hard it becomes an obsession to know exactly what happened — to really know what went wrong and to have a tiny longing for them still.

How about a little arm-chair travel? Swimming with the sharks and making steamed bread in Durban? Yeah. Saving Rhinos with Rhinos without Borders and Grand Prix racing in Johannesburg? Done. Chatting up the Graffiti Girls in Nairobi Kenya? Yep. Biking in Lesotho, South Africa? Copy that. Travel blogger turned web series host Nathan Fluellen really has traveled the world, and in UMC’s World Wide Nate: African Adventures, he takes viewers off the beaten path to places (and to people) you want to see. What’s more is that Fluellen is fully in, participating in every adventure, no matter that he may be visibly skittish, a little embarrassed, or just plain scared.

Riseborough, so good as Michael Keaton’s wobegon girlfriend in Birdman and a zillion other under-the-radar films, does another chameleon performance as the take-charge daughter of a Louisiana shipping millionaire (Byrne) nourishing his business with a little (well, actually a lot of) cocaine transport on the side.

Shot in an almost documentary style, ZeroZeroZero is not for those who need a quick payoff. The plot moves slowly, winding and meandering its way through lots of characters’ roles, motivations, and dreams.

By now you probably know the story or at least the legend. Madam C.J. Walker invented the straightening comb (no) and was the first black female millionaire (she may have made more or less money depending on reports).

Netflix’s Self-Made: Inspired by the Life of Madam C.J. Walker creates more mythic information by making most of the miniseries about the alleged rivalry of Walker and another twentieth-century Black hair-product creator, Annie Turnbo Malone. Despite the stellar cast of Octavia Spencer, Tiffany Haddish, Carmen Ejogo, and Blair Underwood, the storytelling is so jumbled. We get a speedy version of Walker’s life with fantasy scenes of Spencer and Ejogo in a boxing ring. Scenes that should push the story forward are run through as if someone is chasing the writer. Read On Her Own Ground: The Life and Times of Madam C.J. Walker if you want to know more about the trailblazer.

No, just no, love Ice-T in SVU and any Dick Wolfe show that he has appeared in, but not onboard for him and wife Coco to waste their time chasing ghosts, literally.

But that is what happens if you watch their segment or any other of the episodes of A&E’s Celebrity Ghost Stories in which stars Taye Diggs, Paula Abdul, NeNe Leakes, and Kelly Osbourne go to various locations with self-described psychic medium Kim Russo to find paranormal activity.

Comparing it to A&E’s GhostHunters is like apples and oranges. Even if the celebs are serious about their quest, the whole thing looks fake with too much mugging for the camera.

Freeform’s Motherland: Fort Salem isn’t your mother’s sci-fi series, nor your mother’s witchcraft series. Instead it’s a story taken from current times that advocate training a strong military prepared at any time to go to battle.

The fictional Fort Salem is a training facility that has existed since the so-called “Salem Accord” which states that “any child born of a witch shall…deliver herself bodily to Fort Salem in her eighteen year.”

You won’t see a spooky atmosphere, and spells are kept to a minimum throughout the first few episodes. The focus is more on the lives of three new recruits and their reasons for wanting to serve. Taylor Hickson, Jessica Sutton, and newcomer Ashley Nicole Williams play the young witches soon to become soldiers in an army against an insurgence of witches from the dark side, called the Spree.

This show could quickly find its audience or it might take a while amid the slow-moving subplots.

Showtime’s original Penny Dreadful series, a macabre mashup of all those nineteenth-century Brit penny horror novels once sold at the newstand, got a huge cult following during its four-season run.

A penny dreadful set in Los Angeles already loses a little in translation because those sort of penny novels didn’t originate here. Yet there is much to draw on from the ’20s and ’30s, specifically behind the scenes in Hollywood where the movie studios were more like factories and put out hundreds of films to keep poor people entertained during the Great Depression, the dazzling jazz joints and superclubs of Central Avenue, socialism and the beginning of labor unions, the politics behind getting the freeways built, and radio evangelists.

Penny Dreadful: Los Angeles draws on some of these and again focuses on good versus evil like the original. However, there are no classic books this time. Instead Natalie Dormer leads the cast as a dark angel who vows to decimate the city by “giving people what they want.”

Dormer, so good at playing cunning in The Tudors and Game of Thrones, plays many characters as the dark angel disguises herself in the persona of citizens of the time — from a meek immigrant to a too-efficient secretary, to a female Spanish gang member. By this time one is wondering if she’s stretched herself too thin. That is what is so different about this Penny and the original. PD/angels risks falling into caricature instead of a horror/morality tale.