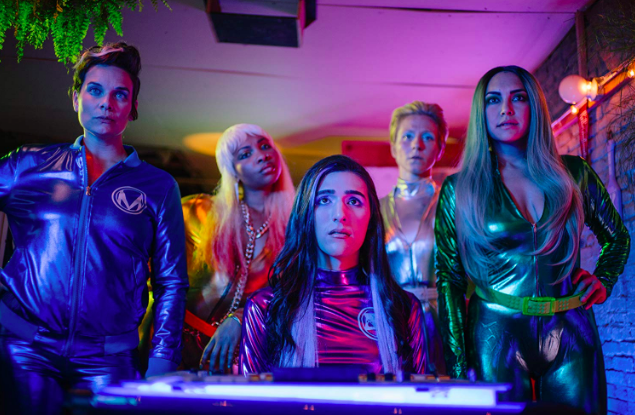 Finally, Kappa Force presents a campy superhero series for the rest of us.

The number of gay and queer superheroes continues to grow. From heroes like Aqualad in Young Justice to Voltron’s very own Shiro, the number of underrepresented sexualities does not appear to be slowing down anytime soon. The ultra-queer superhero Revry Original series Kappa Force is joining the collection of visibly queer and other sexualities superheroes. The romantic comedy-esque program focuses on women empowerment through a queer perspective. This narrative explores tough topics like being closeted, friendships, the oppression of women, and even toxic masculinity.

Kappa Force is produced, created, and written by the talented Addison Heimann. Heimann is a queer creative spirit who tells stories from a unique perspective, which include science fiction and fantasy. His works vary in tone and genre but they all ultimately play around with narratives that affect the human condition. The director of the series is Hannah Welever, who, with an elegant hand, guides the show to it seamless production. The tongue-in-cheek series has brilliantly portrayed sisters-in-arms in a college setting.

The satirical Kappa Force is a sorority team of crime-fighting superheroes that will stop at nothing to brawl out the rooted evil that is present on their college campus. This sassy and exciting web-series plays around with gay history, ’90s terms and slang, while also displaying popular song parodies of the Spice Girls, Justin Bieber, the Pussy Cat Dolls and Third Eye Blind. The songs perfectly, and humorously, pair well with the actions that occur in the scenes. A cheesy and typical meeting of two people finding their perfect match is coupled with a great parody song to enhance its wittiness.

The glamorously diverse sorority sisters in Kappa Force will have audiences laughing from start to finish with their off-the-wall quips. Introducing the lovely ladies of Kappa Force, we have: the Mom (Michaela Petro), the shady Pippa Yakamoto (Aja Wiltshire), the charismatic lesbian played by Cassidy Clearwater (Alex Fisher), the conceited Alexa Jones (Kyra Jones), and the trans woman Lavender Crowe (Elle Walker). These individuals make up the sorority Kappa Force.

The alluring narrative starts off with a crime that propels the story to the very end — the killing of Jeanie Gold (Alanna Rogers). The surprise twist is one thing that no one could see coming, even for those who are generally really good at guessing. The diverse sisterhood of four empowered women are in search of an additional girl to add to their collective. The lucky girl is none other than Jennifer Silver (Madeline Weinstein), who was orphaned at an early age. She might be the sorority’s newest partner, but her own clique is just as fabulous as the sorority. Jen’s new friends include Kevin Huang (Matthew C. Yee), an obviously gay but closeted male, Luke Hale (Dan Wenzel Jr.), a cute white guy for believability, a gothic-ish girl named Chartreuse Black (Emilie Modaff), and a super fun generic white girl, Penny Johnson (Emily Lane).

Let us not forget about the almost-as-important aspect of any show, the supervillain. This series could not have selected a more picturesque name for their antagonist, the Douche aka Brad Michael James (J.J. Phillips) — a name that perfectly depicts the nuances of what we hate about frat boys while also showing the qualities we enjoy when looking at them. The Douche isn’t the only cutie. There is even a little bit of eye candy with the evil villain’s lackey, Brock (Walter Briggs). His performance is not only believable, but there is even a hot steamy make-out session. Anyone interested in watching this hunk lock lips with another hotty should definitely not miss this one.

The series is a beautiful blend of live-action fighting with comedic situational humor. This is a recipe for success. The music that effortlessly syncs with the actions creates an experience of high energy and involvement. The themes of sexuality, race, and gender all intersect in this comedy of superheroes. The combination of theme and music with the help of caustic remarks help to lighten up the darkest of situations.

The Kappa Force series of sorority sisterhood fighting evil scum is attractive and even strange to think about, but that’s what makes it so intriguing. This superhero genre might appear to be better displayed as animation as many have been in the past, but it is the syndicates of women working together for a common cause that pushes this forward. Kappa Force is a series that is worth binge-watching. This series should definitely be put on the must-watch list for its humorous takes on college life, impressive parodies of songs, and its positive message of sisterhood.

The overall rating is 4 out of 5 stars.