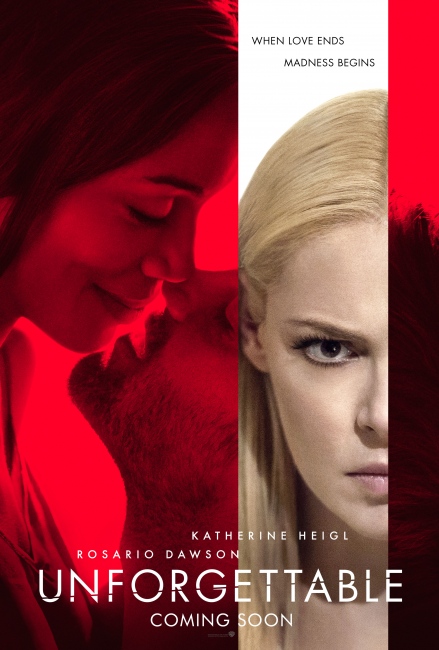 “Crazy just looks good on you”, is what I told Katherine Heigl when I spoke with her last week. The former Greys Anatomy star’s character in Unforgettable is as far away from the perky intern Izzy Stevens as you could get. Along with her co-star Rosario Dawson, Heigl plays Tessa an emotionally wrought new divorcee trying to cope with her ex-husband, David’s (Geoff Stults) engagement to new girlfriend Julia (Dawson). Julia while trying to settle into her new role as a wife and a stepmother to David’s daughter, is attempting to enjoy her happier ever after, and bury the memory of her troubled past. Tessa racked with jealousy will stop at nothing to turn Julia’s dream into her ultimate nightmare, and reclaim what she believes was taken from her. I have shamelessly started calling the film ‘The Hand that Rocks the Heigl”. Denise Di Novi makes her directorial debut in the best big budget Lifetime original movie ever to grace the silver screen.

The film’s greatest asset, however, could comparably be its most major flaw. The ridiculous drama that Heigl brings to the character of Tessa makes it her best film work to date, but the film fails to stick the landing. Perfectly styled, bleached, and flat-ironed to within an inch of her life Tessa, is a caricature of the perfect Ice Princess. I just wished they ‘d leaned into it. Tessa is a better throwback to Alexis from Dynasty than she is to Alex from Fatal Attraction. As the debutante who looks like Ivanka Trump and acts like Regina George, Heigl is perfectly cast as the woman you love to hate – treacherous but not terrifying. 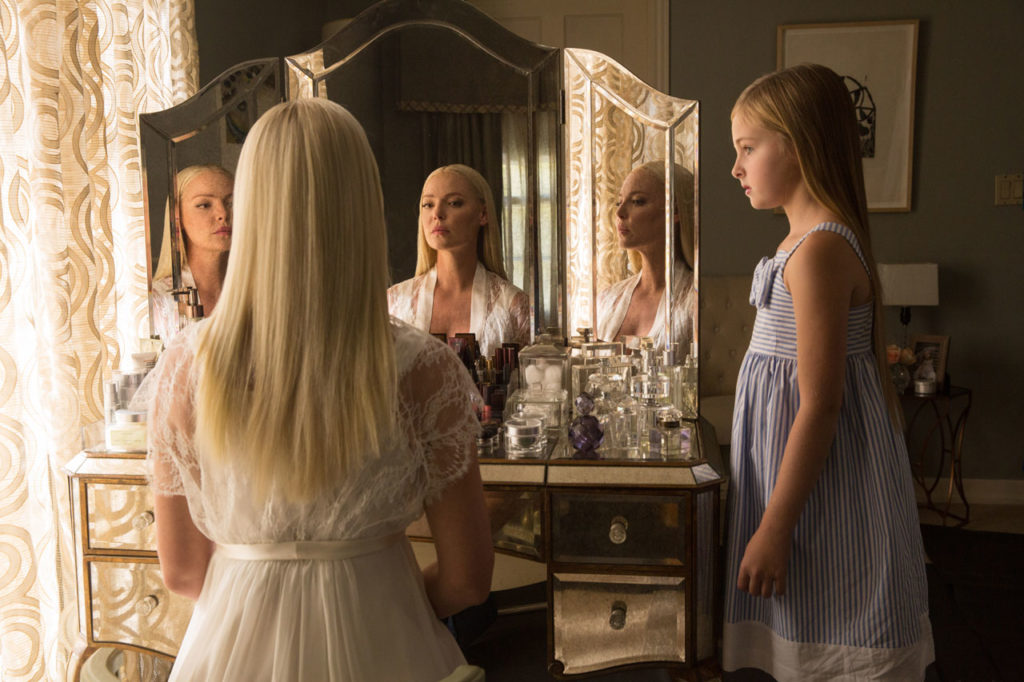 In a film like this, you don’t need to make the stakes life and death. Taking Unforgettable too seriously is a mistake. If they’d gone a little further with the parody and awesomely badness of it, we could have had more fun. Unforgettable is so reminiscent of previous films you can’t help to question the need for it. So if you aren’t going to top what Adrian Lyne did in the genre, then you have to double down on the cheese. I had a similar experience last month with Life the Jake Gylehnhall and Ryan Reynolds space thriller. Both films have great casts and an attempt on freshness. But with so many similar iterations in the genre, if Unforgettable loses it’s humor it would suffer the same ill-fate as Alie- I mean, Life. Luckily thanks in part to Heigl, and Whitney Cummings playing Julia’s hilarious best friend, the film does play to its strengths. Cummings’ comedic timing in part saves the movie. When Julia learns about Tessa’s past psychotic episodes Cummings quips – “Okay, so now is the time to leave. Like now” This, of course, is exactly what any reasonable person would say, but so often in these films, the “best friend’s” job seems to be to try and explain away all the impossibly deranged behavior. You are so expecting her to say something along those lines that the logical response is instantly hilarious.

Di Novi directing for the first time also shows some skill behind the camera. The film is shot well and at times beautiful. I am particularly impressed with how voyeuristic she makes the audience feel. Though this is the film that washes over you, carefully timed moments of pause entice you yell at the screen. In my screening, more than one person, when Dawson’s character Julia agrees to have dinner with Tessa, audibly said “No,” or “Don’t do it.” Tessa goes through scheme after scheme to undermine her ex’s new relationship with Julia. Again there are no surprises here, but we are invested because how believably Dawson’s character begins to unravel from her machinations. Dawson as the everyday girl is not as boring, as this character-type tends to be in these films. She comes in with her scars and secrets. Di Novi has crafted a film where the villains are empathetic the heroines are not always heroic. The realism is needed to keep it balanced, but to stay believable, they missed a golden opportunity to make a fun genre parody. 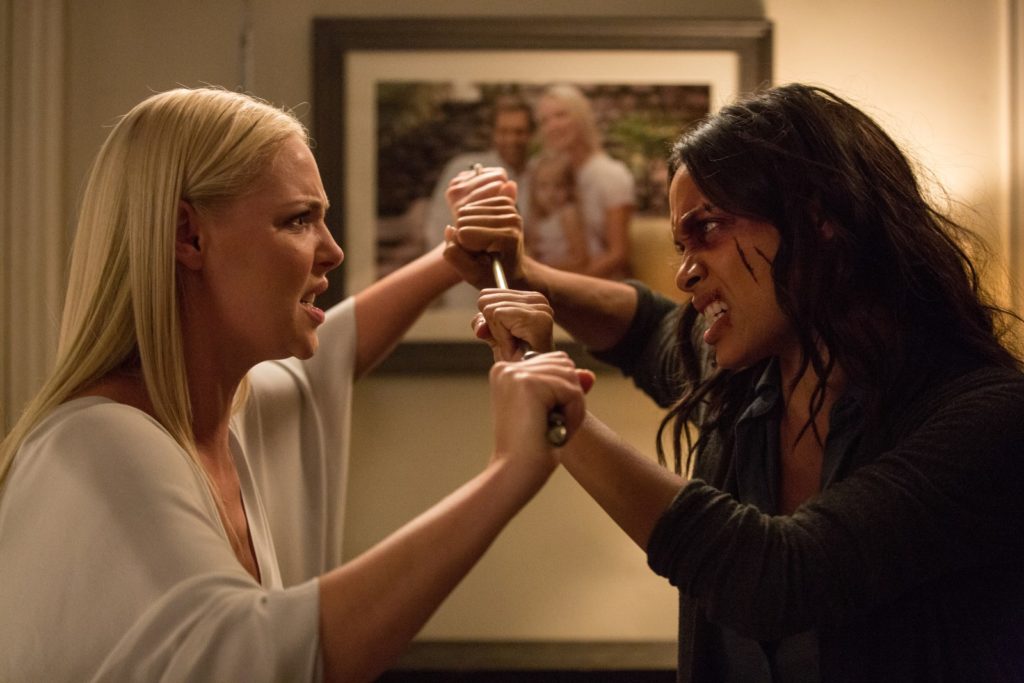 Though intended or not the film is a lot of fun. My biggest complaint, however, is the character of Julia. Dawson does an excellent job in her portrayal. The problem is in an attempt to make her an ‘everywoman’ they have seemed to erase her cultural identity. A woman of color headed to Caucasian suburbia to marry a white man is a tough needle to thread without being exploitative – but ignoring the situation is just as bad. We all know Rosario is a woman of color but when the narrative doesn’t add anything to affirm that, even in non-verbal ways, it can feel like erasure. This is perhaps unintended collateral damage, but it is damaging nonetheless. At times the portrayal just took me out of the film. On more than one occasion I felt a commentary or reaction that woman of color would have had was just not explored. The idea behind blind casting (casting a role without a particular race in mind) is not colorblind casting. Cast the actress that embodies the character but then be sure to include what that actor brings to the performance. These things do not have to be spelled out, but they do need to be there. Representation matters but having an actress of color isn’t the only thing you have to do. We see this so often with strong female characters in action movies. If you cast a woman in a male type role and then just have her act like a guy with boobs does that do anything or female empowerment? These are the next level questions we have to answer as we continue to push for diverse characters in the film. Even with this stumble, the film was a fun ride, and Heigl’s crazy-ex foolery is well worth the price of admission.