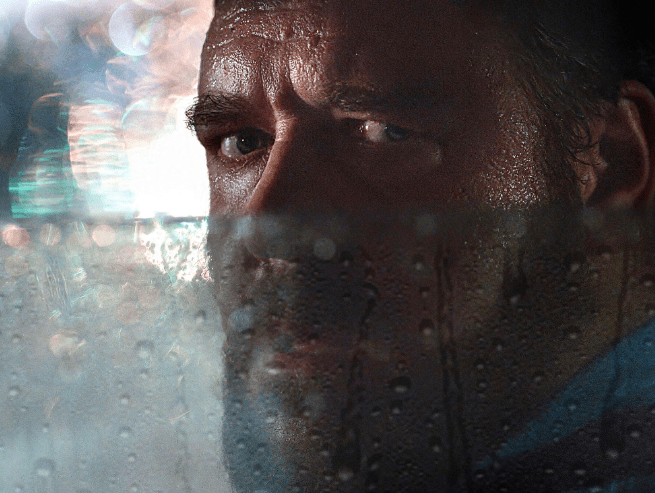 I live in Los Angeles, a city synonymous with heavy traffic and overcrowded streets in nearly every city corner. I think of all the times I had to get in the car and drive on the freeway or a residential highway listening to my favorite song when suddenly that peace is interrupted.

Sometimes it’s another car swerving into my lane because I’m not going fast enough and flipping me the bird. Full disclosure, maybe I’ve been the a**hole, angrily driving up aggressively to a car that was treating the freeway like a country road and giving them the death stare. Perhaps the car in front took a little too much time putting their foot on the pedal. Next thing you know, you miss the turn signal because they were too busy texting. Instead of giving the driver an eyeful or an earful, maybe I’ll just let them be because they could be crazy — which is the film Unhinged.

Unhinged is the story of a soon-to-be-divorced woman named Rachel (Karen Pistorius) and her teenage son Kyle (Gabriel Bateman). Suffering from depression brought on from divorce proceedings, Rachel struggles daily to complete essential tasks like getting to work or dropping her son off to school on time. After another debilitating morning of trying to be on time, Rachel and Kyle set off and find themselves trapped in the morning commute crush before taking a detour to side streets. Distracted and frustrated by life in general, Rachel becomes increasingly impatient as she navigates through traffic. Additionally, Kyle shares his frustration with her poor time management, which results in another after school detention.

While awaiting the left turn signal, a distracted driver refuses to move, which leads to Rachel’s car, and all of the vehicles behind them, missing their opportunity. What follows is a few nasty words from Rachel and a scary, eerie calm from “The Man” (Russell Crowe) as she berates him. It’s then the shift happens, and Rachel realizes this is not a standard road rage exchange. She doesn’t realize that “The Man” is harboring rage from his divorce and is looking for just the right target to enact his wrath.

After dropping Kyle off at school and agreeing to a morning meeting, Rachel realizes she’s being followed by “The Man” as she stops for gas. What then ensues is a horrifying game of cat and mouse. “The Man” begins to track her every move with only one intention, to kill her unless she apologizes for being rude during their road rage exchange.

If you’re from a place where driving isn’t part of your everyday routine, Unhinged seems a bit over the top. A woman late for work gets mad when the driver in front of her misses the turn signal, making her late for work. Said man then follows her all over the city and wreaks havoc in her life until he doesn’t. However, if driving is your routine, this scenario is plausible if you’ve spent time on the 405, the 10, or the 5 (remove the “the” and add “highway” in front of those numbers for non-Californians). The internet produces countless video examples of people fighting in the middle of traffic due to missed turn signals and stopping abruptly and causing minor collisions.

ALSO READ
Review: ‘Beast’ is All Brawn and No Brains

From the moment Russell Crowe first appears on the screen, it’s abundantly clear his intentions are far from pure and noble. Nothing about “The Man” is warm, charismatic, or redeemable. From the way he sits unmoving in his vehicle to the menacing side-eyes, his portrayal is fear-inducing on a multitude of levels. Also, Pistorius is believable in her inability to take responsibility for her actions, whether it be parenting, rudeness, or being on time for real. Gabriel Bateman rounds out the central characters as a sweet, intelligent son. The latter wants some normalcy and routine in his life after his parents have decided to divorce.

Ultimately, Unhinged falls short because of its portrayal of violence and how “The Man” leaves devastation behind within the span of a few hours. “The Man”‘s need to enact revenge on those around him, whether connected to his life or not, is over the top. There’s no real explanation or exploration into his backstory to justify his bloodthirst. Additionally, his character is an overweight, over 50 man who uses brute strength to commit atrocities on people half his age. Not to mention he’s managed to drive all over a city with relative ease committing crimes without hitting any traffic, which is the cause of the primary premise of the entire story. If the story’s timeline is what seems to be a regular workday (roughly 8:00 a.m. to 3:00 p.m.), where is the traffic to slow things down?

Overall, Unhinged is an intense ride that will make you question your daily horn use.