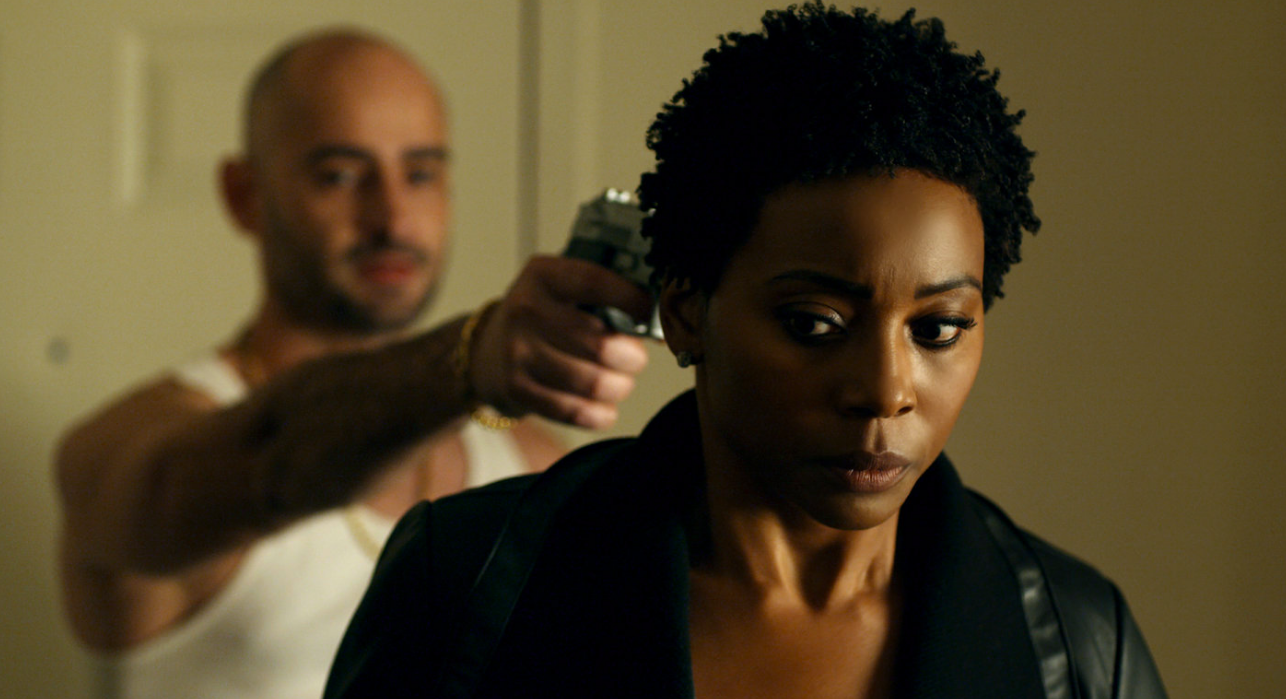 Skin in the Game is a film about the underground human trafficking industry. 15-year-old Dani (Sammi Hanratty) is abducted and forced into human trafficking. After failure to file a missing persons report until the 24 hour time frame, Dani’s mother (Sharon) contacts her ex-friend Lena (Erica Ash) for help. Lena is a recovering prostitute who has created a safe haven for the young women she encounters that have been abused. She knows the ropes and tricks of the industry since she’s experienced it first hand. For Dani’s sake, Lena agrees to help out. The film takes viewers into the dangerous and fast-paced journey into the life of the streets as we join Lena and Sharon in their mission to find Dani before she is “turned out”, and gets lost in the trafficking industry.

This film digs into the nitty gritty behind-the-scene details of the industry. Based on true events, it’s rough watching knowing that this is not fiction. The multi-million dollar criminal industry is a form of modern slavery. It is the world’s fastest growing crime, affecting an estimate of 24.9 million people worldwide. In Atlanta alone, the industry is worth $290 million. 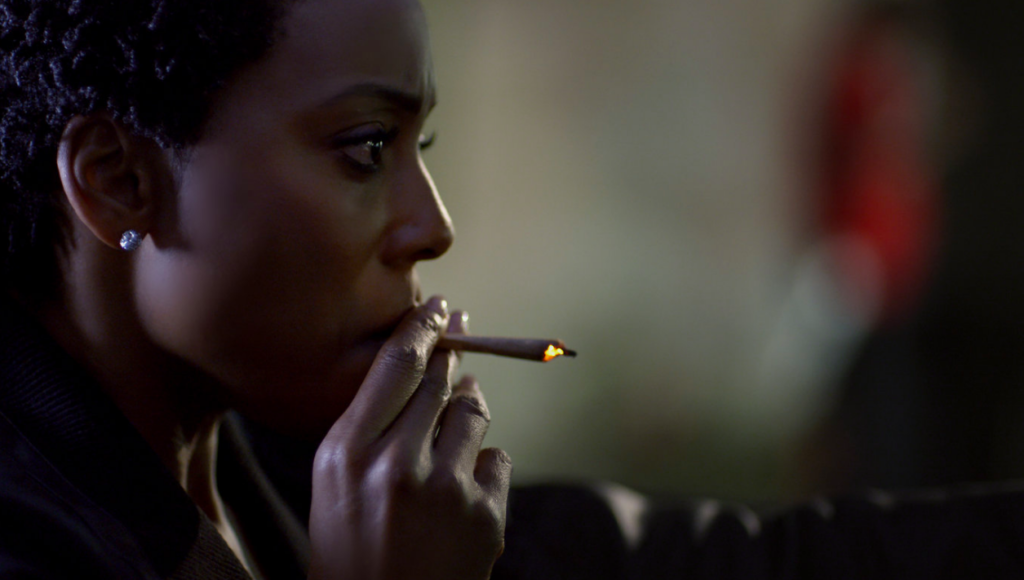 Skin in the Game discusses why and how girls end up in the sex trafficking scene. Of course, it is important to note that men are also victims of the industry, but the film focuses on women. Everyone’s situation and story is different and Skin in the Game takes note of that. Some women may find themselves in the wrong place at the wrong time, some may be experiencing financial and family issues at home, or in the case of Dani, some could have simply been abducted. Every story is different but each deserves to be mentioned and learned about. These women did not choose to be put into the industry, they were forced to against their will.

The film also dives into the mental state of the girls when they are abducted. Dani was 15 years old when they abducted her. She was talking to a man online and when they finally decided to meet up in person, she soon realized that he wasn’t who he said he was. The target for most human trafficking cases are underage girls, with the average age, according to the film, being just 12 years old.

Manipulation and control is a big part of how women fall prey to the industry. Because the girls are so young and vulnerable they can easily be manipulated into staying. Being afraid to leave if they ever get the chance to, is also not necessarily uncommon. We see this happen with Dani at one point during the film, but we also see this happen with the other characters of the movie such as Violet (Stefanee Martin). Violet is one of the girls that live with Lena in her safe house. Violet is young, pretty, but also “in love” with and in a “relationship” with her trafficker. In other words, she suffers from Stockholm syndrome. Talks with Lena and another essential member of the house, Haley (Gideon Adlon), discusses the manipulation that can occur among sex trafficking victims. 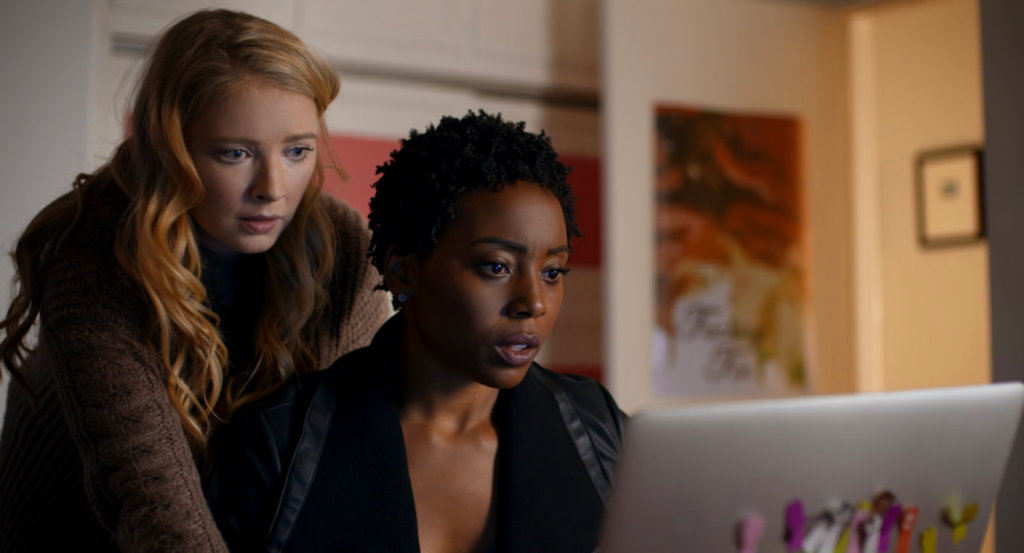 Sometimes human traffickers build relationships with the girls they sell, at least this was the case with Violet. The traffickers may buy these women clothes, bags, or food and tell claim that they love them — even promise to help them pursue their dreams. But in return, these women have to pay them back the only way they know how — sex. There’s a quote that Lena said in the film regarding Harriet Tubman. She stated that “[Tubman] could have freed a thousand more if only they’d known they were slaves.” Brainwashing and mind control is a real thing and it’s no different in the human trafficking industry. The human trafficking industry is all about control.

Once Dani is abducted she learns the true identity of the guy that she was supposed to meet. The guy is actually a woman named Eve. Eve is a pimp who runs the show. She calls the shots and it’s interesting that this film decided to make the pimp a female. There is actually a large percentage of women that are traffickers. Often times women are used to recruit other women into trafficking, and I loved that this film decided to debunk the common misconception that all human traffickers are male.

The film touches on a lot more details, such as the negative opinions that people may have about the women that are being sold in human trafficking, or how police handle missing persons cases. Skin in the Game is fast-paced, it flows nicely and keeps you watching. There were not any dull moments. The film is educational but also engaging. Check it out when you get a chance, there is still so much to learn about the human trafficking industry and this film is one way of doing so.