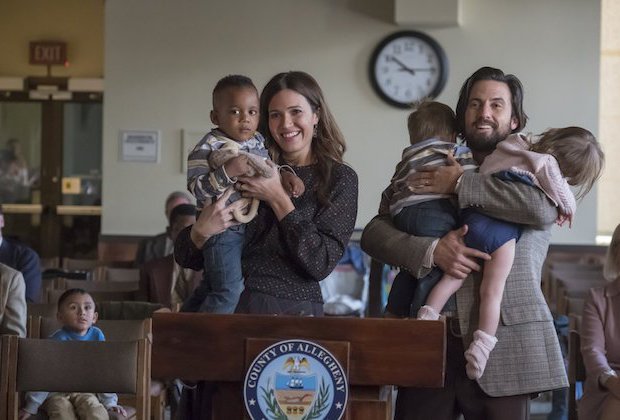 In this week’s episode of This Is Us, The Pearson’s hit some roadblocks in adopting Baby Randall, Kevin struggles to be a human, Kate and Toby consider eloping, Randall and Beth have difficulty accepting Deja’s relationship with her mother, and William was shown mercy while struggling with addiction.

The episode opens in flashback with the Pearson’s scrambling to prepare for scheduled and unscheduled social worker visits to check on Randall.  When they reach his first birthday and finally appear before a judge to adopt, they are quickly dismissed by Judge Bradley who “has questions.”  After being confronted by Jack, Judge Bradley agrees to meet with them in his chambers (totally unethical) and tells them, “That child belongs with a Black family.” The judge goes on to talk about the realities of race and being a Black man.  Rebecca and Jack are stunned.  “With all due respect to your opinion, our son was left in a box,” Rebecca begins but is cut off by Judge Bradley who ends the meeting.  Later, as Rebecca is going through photos from a family photo shoot, she decides to send Judge Bradley a picture along with a letter.

Now, here’s where the episode fell short for me. This show is known for its speeches. Beautiful, prolific, life-affirming speeches about love, acceptance, grief, and vulnerability. Yet all Rebecca could muster in her letter to Judge Bradley was “Randall is my son. Whether you approve or not…” Yada, yada. “We will keep coming until you do your job.” Really? I get it.  Judge Bradley needed to be wrong.  He was wrong.  However, I would have liked to see some acknowledgment that a) yes, there are realities about being Black that the Pearson’s will never understand but b) they are going to try anyway because Randall is their child and that’s what parents do.  For Rebecca to completely ignore Judge Bradley’s point about the importance of racial identity (albeit flagrantly unethical), it felt not only out of character for her (the woman called her own mother racist) but also cheap.  Judge Bradley ultimately recused himself and another judge granted their adoption.

On the other hand, this episode dealt with the murkiness of Deja’s best interests very well. In this episode, Randall took Deja to visit her mother in jail. The visit was court mandated, so Randall didn’t have a choice but to comply.  When Deja’s mother refuses to see Deja, Randall is incensed. He goes home and Beth is even angrier (she hits him with the hand waving and “unh, unhs”).  Randall decides to visit Deja’s mother to deliver one of his speeches but is sidetracked when he realizes she refused to see Deja because she was visibly injured after being assaulted in prison.  Nonetheless, Randall proceeds to judge her for her life choices.  Now, I’m Team Beth and Randall.  I mean, when Randall told Deja’s mom he was married to “a headscarf and coconut oil… Black Queen” and as a wife (who as of this moment is wearing a headscarf and is moisturized in coconut oil), I all but stood and applauded.  However, somewhere, maybe halfway through his speech, as Deja’s mom kept interjecting with pieces of her tragic life story, I wasn’t sure who I was rooting for. Maybe she was right for refusing to see Deja and maybe if she gets it together, she should be with her daughter. 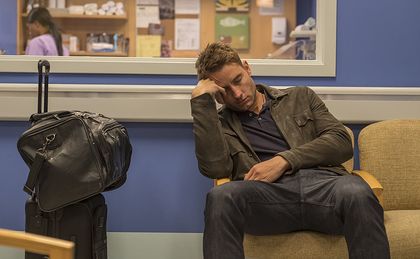 In other news, Kate and Toby tell Kevin they are expecting in an adorable way because let’s face it, everything they do is adorable.  When Toby hesitates to tell his mother (because she is Catholic and they are unwed), Kate suggests they just get married at the courthouse and avoid the big wedding. As she rambles on about not being able to find a dress that would fit and not having her father, Toby realizes that it could be Kate’s fear that is pushing her to opt out of the big wedding.  To a slow acoustic version of Time After Time (because they want us to cry), Toby reproposes and encourages Kate to allow herself to have the wedding of her dreams, even though everything may not be how she planned it.

Meanwhile, Kevin flies to New York to propose to Sophie (in response to Kate’s pregnancy news) — with not one, but three rings — but ultimately breaks up with her instead after having a dream about the shitty father he would ultimately be.  Okay, so here’s my Kevin theory.  He is just an asshole.  Like irredeemably, insufferably, born-this-way asshole.  To be clear, I know there are reasons he is an asshole. Those reasons, however, do not stop him from being an asshole.  I think the one redeeming thing about him this week is that he realized it.  While his speech to Sophie was harsh and quite honestly, downright mean, he all but told her, I’m an asshole so leave me alone.  The man told her “when I dream of our future together, it’s a nightmare for me.”  I mean… just… wow.  While I love Alexandra Breckenridge (the actress who plays Sophie), I really want to never see her again… at least with Kevin. Side note, Justin Hartley (who plays Kevin) did an awesome job this week.

There were a few other excellent William-centric nuggets in this episode. in flashback, we learn a judge showed mercy on young William, Randall’s birth father, and got him help for his drug addiction instead of punishing him.  William called himself “The Most Disappointed Man” (also the title of the episode) when appearing before the Judge on drug charges after summarizing the loses in his life (his mother, wife and child).  The Judge asked him to remember the mercy he showed him, specifically his face, when confronting bad choices in the future.  It worked for decades until William was told his cancer was incurable.

However, just before William was about to use drugs again, Randall showed up (surprise) to introduce himself as seen in the pilot episode.  If Randall had showed up just ten minutes later, the first season would have been completely different.  The storyline tried a little too hard for me.  From William’s incredibly self-aware speech at the beginning to the Judge’s face flashing in front of him at the end, it felt a little contrived and one-note — especially given the complexity Ron Cephas Jones brought to the character. Nonetheless, I appreciated knowing Randall saved his father.  It makes you wonder who William would have been if Randall had been in his life. In that way, the episode kind of came full circle, didn’t it?

Up next, more flashbacks of the big three as adults.  I’m looking forward to it, but don’t think we haven’t noticed we still don’t know exactly how Jack died, NBC.