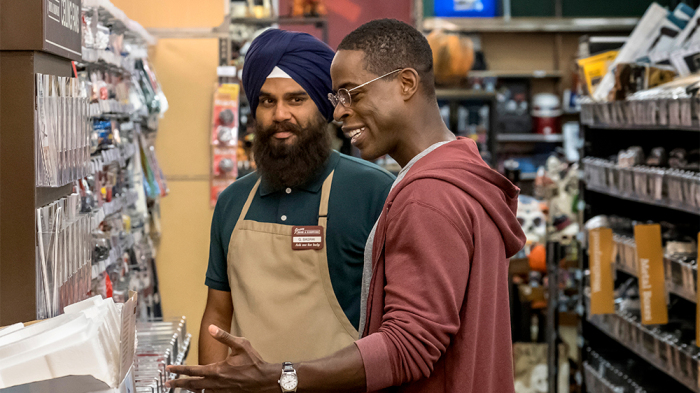 This week’s episode of This is Us opens with the mini-big three getting ready to celebrate Halloween.  Little Kate is indecisive about her costume, Randall creates a map to “maximize the house to candy ratio” (genius) and Kevin hates on him (as per usual).  When Jack agrees to let Kate change her costume last minute, Rebecca confronts him on spoiling her. Jack points out that she does the same thing with Randall.  When it’s time to go trick or treating, Kate and Kevin refuse to follow Randall’s map. So, to avoid a meltdown, Rebecca goes trick or treating with Randall while Jack goes with Kate and Kevin.

While trick-or-treating, Rebecca urges Randall to improvise and trick or treat at The Larsons, a house not on his list. The Larsons (who Randall didn’t include on the map because they give out licorice and talk too much) called him a miracle baby and referenced Randall’s parents lost child.  Rebecca is forced to tell Randall about Kyle, the triplet that died during birth.  As always, kid Randall takes it in stride sharing a Twix with his mom but clearly heavy with feelings he can’t yet articulate. Side note: The Larson’s are HORRIBLE.

This week, we also get a glimpse of the big three in their twenties.  Kevin is a struggling actor working in a hair salon washing hair.  Kate is still living in their hometown, Pittsburgh while working as a waitress and attending night school.  Randall and Beth are expecting their first child.  Randall is fresh off of his nervous breakdown and things between him and Beth are tense.  Beth calls on Rebecca for added support in the days leading up to the birth of the baby.  Meanwhile, Randall struggles to prepare for the baby insisting the nursery needs a ceiling fan to avoid crib death because… Randall.

When he struggles to install a ceiling fan, he goes to the store the night before Beth is scheduled to be induced to buy a new one.  At the store, he is paralyzed by the choices and confides in a store employee that he is afraid to be responsible for a human life.  Garuda, the store employee, is a father of five, and tells Randall when the baby arrives, he will have all the answers he needs.  He also helps him choose the right fan.  Randall is moved to tears and put at ease.  Just as Randall is about to purchase the fan, he gets a call from Rebecca that Beth is going into labor and the ambulance can’t make it to the house due to Halloween road closures. Randall races home (he literally runs from the store to his house) just in time to help Beth give birth to their daughter who he names Tess, after the fan that Garuda recommended.

Meanwhile, in Pittsburgh, we learn Kate is having a tough time.  She regularly sits outside the Pearson childhood home eating fast food and just started a relationship with a married man. In Los Angeles, Kevin gets turned down for another role that goes to his roommate.  When his roommate invites him to a party to celebrate, Kevin corners one of the hiring execs and tries to steal his roommate’s role. Yup, he really did that.  The hiring exec tells him about himself, vowing to never hire him.  Later, Kate and Kevin learn that Beth gave birth to Tess and fly to Randall’s to meet the new baby.  They confide in each other that their lives aren’t going as planned.  Kate decides to move to Los Angeles to be with Kevin and Kevin decides to take improv classes to become a better actor.

In the most tear-inducing moment of the show, Rebecca meets her granddaughter for the first time and grows emotional because Jack isn’t with her for this special moment.  In flashbacks, we also get to see Rebecca meeting baby Randall for the first time which was both heartwarming and heartbreaking since she had to first say goodbye to baby Kyle. In the final scene, Rebecca is back home looking at pictures of Tess on Facebook and gets a message from Miguel, Jack’s best friend who we know she ultimately marries. I don’t know about you but learning this little nugget made me like Miguel more. We know Jack dies when the big three are in their teens so Miguel waited at least a decade before making his move.  Maybe he isn’t the dirty best friend wife-stealer we all thought he was.

Overall, it was a solid episode. It was a treat getting a glimpse of the big three in their twenties and more insight into Kate and Randall’s vulnerabilities.  Kevin and I are still a work in progress. I’m caught between wondering if that’s due to Justin Hartley’s superior ability to play a jerk or the still-developing character arc.  Let’s face it, despite some minor redeeming qualities in how he relates to Kate, Kevin is a jerk as a kid, a jerk as a teen, a jerk in his twenties, and a jerk in the present day.  His Halloween costume as a kid is a cigar smoking bum because he would have “no chores and nothing tucked in.”  While that is mildly charming as a kid, such goals do not translate well into adulting. It’s clear he falls on the outside when it comes to his parents and perhaps seeing more of that will make me care more about why he is having such a tough time as an adult.  Nonetheless, I can’t help but root for all three.

Next week, we can look forward to a flashback to Rebecca and Jack’s fight to adopt Randall (with a guest appearance from legend Delroy Lindo) and I’m sure some stellar SKB acting as Randall confronts Deja’s birth mother, and Toby and Kate consider eloping.  I’ll be there with my popcorn and my tissues!