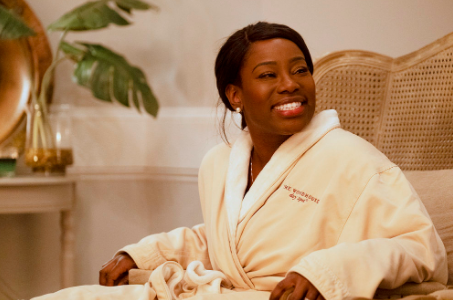 It’s fun to watch someone successful enough not to take themselves too seriously. That’s the premise behind USA’s new She’s the Boss, a lightly-scripted, humorous family-oriented series about Nicole Walters, a successful marketing professional who quit her day job to become the founder of Inherent Learning, a business development training company and…the star of her own show!

Seriously though, how many people can say both in the same sentence?

BGN talked to Walters about her work, how she ended her first career (executive at Periscope) and moved to her next (motivational speaker), being married while working together at home, motherhood (to three adopted daughters), filming in their home, and making all that work.

How did the series happen?

I was already sharing my [social media] online between building a business and my family and parenting goals and in sharing that out loud online. It attracted the interest of some producers, and they thought this story was incredible. “It’s exactly what the audience needs and we would like to help you bring it to the people.”

That is fast, that’s really great.

Oh, no, it took four years, though, from that moment to hitting the screen. So this has been in the works for some time.

Can you take us through what it’s like to have cameras in your home?

Sure. What’s interesting is that I grew up in an age where you had to go pick up your photos whenever you got them developed. For me there is an awareness, even whenever I’m taking video footage on my cell phone, that this is something different from what I grew up with.

However, for my kids and my family, they are growing up with cameras in their hands all the time. So when it came time to film a TV show, it actually wasn’t much of a transition for the family since they are used to documenting their daily roles and their time with their friends.

For me it was definitely an adjustment trying to capture all that video, but ultimately it’s pretty special because now we will have the best home video to put back on and laugh.

How long are the cameras in your house?

On an average shoot day, it’s anywhere from 12 to 15 hours. I’m busy in our home, but the upside is even though what you’re getting is a kind of reality, it’s not like I wake up and there is a camera, boom, in my face. But as we go about, I say, “Hey [camerapeople], just keep doing what you’re doing,” and then they’d be there for 15 hours.

Where is this show based?

In Atlanta, Georgia. That’s where my business is headquartered and that’s where we live.

We see that you have a manny (Eddie Bernardez) and he’s funny, but how do you really get everyone going in the mornings?

Yes, well obviously, we don’t delegate our parenting. So we haven’t changed. The thing is we have independent children, so they know to wake up and where to be in the mornings and to get downstairs.

I bring a lot of my business into the home so some of that structure doesn’t really go as well, but somehow when everybody has to be on the show, the thing falls apart.

Your husband is a lawyer. Will the show get into how he came to work for you?

Not too much, but we both work in the home office so you will see him barely working in the office. I hired my husband about two years ago once my company was really taking off so that he could become general counsel because I get plenty of contracts. He helps me with my clients. He reads lots of contracts, and I give him sandwiches.

So he must have seen it was a good job opportunity?

You two are an interracial, inter-religion couple. Is there really anything left to mine for the public on that subject?

I love that question just because that is part of what makes our show really different. When we talk about things like that or you see them on TV, they are usually the kind subject matter on the show, where you see, “Oh, we are an interracial family that is trying to figure it out,” somewhat similar to things like Black-ish, and things like that. But what’s special about our show is we take a different approach.

We say this is every family. This is what America actually looks like. We are truly a modern family and that’s refreshing. Yeah, we have all the differences that you see all through America, but every family will see themselves as well. It is extremely relatable.

There’s a scene where you are in front of what looks like thousands of people, announcing your business. How did that event get put together?

I professionally speak while I am traveling, to audiences — anywhere from 10,000 people to 100,000 people. Obviously, this was pre-pandemic. I am a professional speaker. I do some motivational work. I do some live teaching around business tools, sales, marketing, so that was one of those events that was captured to show. “This is what Nicole is doing.”

How did you come to the decision to start your business?

I’d been working in corporate for so long, and it seemed that my purpose kept knocking at my door. I have friends and clients and people just reaching out all the time saying, “Can you help me? Help me make my business more effective, help me make more money, help me understand the business and financial stuff?”

Finally, I felt I just had to create space for it.  I felt I didn’t have any more options than to answer the door to my purpose, so I quit my job. I’d been a public servant for 10 years, and I quit my job and said yes to my future, and I wouldn’t change a thing.

Your parents came to the United States from Africa. Now we have a VP whose parents were immigrants. Has that in any way been a good marketing tool for your business and the show?

Oh, absolutely, I love sharing that. My parents came here from Ghana with a big American dream. I think that is something everyone can relate to, wanting to work hard to change our future not just for ourselves but for future generations. I really relate to that. The American Dream for my parents was just to have more options, options to pick the career that serves you, not just to have the house, the two professions, and the dog.

The show has a lot of purposely comedic situations, but what is the one thing you want the audience to take away from watching?

The number one thing I hope anyone watching takes away is that my family is flawed, just like any other family. We make mistakes, we don’t always get it right, but what we do is we handle every situation with grace, with panache, and with love.