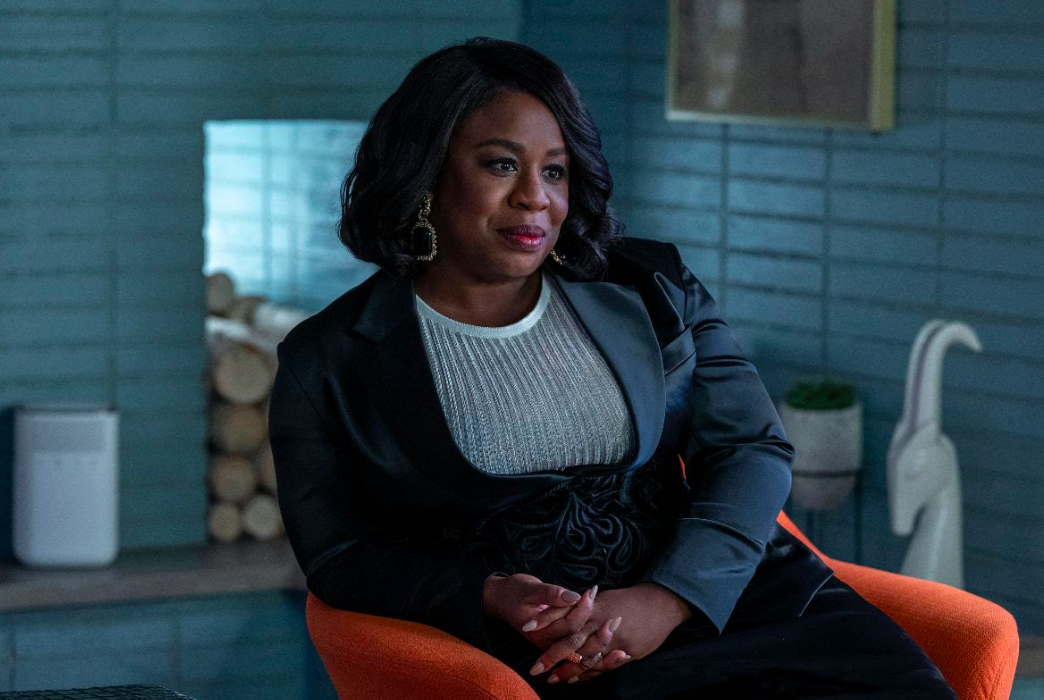 Fans of the famed, award-winning series In Treatment have been given a second chance. The series returns this month with a revamp. Instead of veteran stage and film actor Gabriel Byrne as psychologist Paul Weston, Uzo Aduba (Emmy and SAG-award winner for Orange is the New Black) steps into the role of Dr. Brooke Taylor, an emphatic, concerned doctor who now sees patients at her home instead of the office.

The theme is the same, with each half-hour episode focused primarily on one patient and their problems alternating with an episode focusing on the therapist. Like Paul Weston (Weston will be alluded to sometime during the season;; will Byrne show up for a cameo? Stay tuned.), Brooke (Aduba) works with patients played in individual episodes (Anthony Ramos who has mixed feelings about working as a caregiver to a family’s adult son, John Benjamin Hickey as a wealthy tech millionaire convicted of white collar crime, and Quintessa Swindell as a Black bougie pampered teen) while she struggles to come to terms with her own issues in her off hours.

Aduba, so well known from her featured ONTB role as Susanne, aka Crazy Eyes, for seven seasons is now in a role that calls for decorum rather than abandon. As Brooke, she now wears designer pant suits rather than prison jumpsuits. Her demeanor is calm and her hair is coiffed.

BGN spoke with the charming actress and discussed her approach to her new role, as the show shines a small spotlight on Baldwin Hills, the wealthy primarily Black community in Los Angeles.

When this was offered to you were there any hesitations?

Some initial hesitations, yes, but the path was made clear that this was a project that I was supposed to do in terms of timing and all that.

What were your thoughts on how you would handle this role?

I knew that the show that [writers] Jen [Schuur] and Josh [Allen] had crafted had a nice, healthy mix of Brooke’s identity and trying to figure out how to navigate both her professional persona and the woman at the core of who she was/is, and I wanted to make sure that both her strength and her vulnerability would come through. Those were principal. I also wanted to make sure that for everybody, my fellow castmates, that I could be alive for them, to be of service in whatever way that I could be through through the work and the stories their characters have to share with my character.

Have you watched the previous In Treatment?

You know, I only watched a little bit of it. I watched a bit because I knew when I was coming in to do this, I knew that I wasn’t playing Paul Weston. I knew that I was playing Dr. Brooke Taylor, and I wanted to make sure that her life and world had the space that it needed to come to life.

Obviously I have intense admiration for Gabriel and Dianne [Wiest], Blair [Underwood] — everybody who’d been part of the show over the seasons.

I just wanted to be sure Brooke had the space to exist in her world and also to find her method of treatment and process without interruption.

You filmed it in Baldwin Hills.

We filmed exteriors in Baldwin Hills. The house you see — where she’s treating inside, that was a stage. That was entirely built.

I’m not from Los Angeles. I have no idea where Warner Brothers is but it was built there. I just know it’s somewhere in Los Angeles because I didn’t drive. Then the exteriors for her house were shot in Baldwin Hills.

It seems like the writers for the show were trying to bring Baldwin Hills to the forefront because there are lots of references in the show about the neighborhood. But since you are not from Los Angeles, you may have not know that Baldwin Hills is sort of like the Beverly Hills of Black upper class people.

Yes, I did know that. In terms of prep, I did learn about Baldwin Hills and the society/community that lives there. When we went there, it was an absolutely gorgeous, really really beautiful area. It was super pretty.

I was noticing your Twitter and other social media. You’re very much an advocate for a better world, socially and environmentally. Were your parents, as immigrants, an influence?

Absolutely. They raised my siblings and me up to use our voice, to speak our minds. My mother was someone who had no problem standing up for what is right and just in the world, sharing her opinions, and making sure that we, as her children, did the same.

She was not afraid of challenging the system at all, for the betterment of all. So that is something my siblings and I hold dear. I just think it’s doing the right thing.

You have a face that seems to just light up in pictures and social media. You always seem so joyful. Has anyone ever told you that?

That my face is joyful?

Yes, and that you have a presence! Some people have that light.

Well, my signature on my email, in caps, is “GO and ENJOY.”

I’m not saying that every single minute of everybody’s life is pure joy but it’s about trying to find the joy.

In Treatment streams on HBO on May 23.