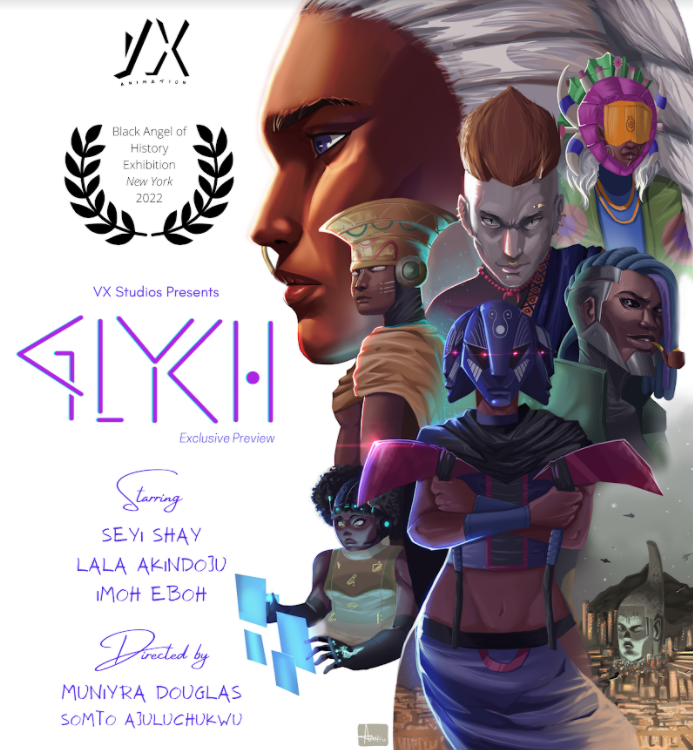 The award-winning company is excited to announce the official release of the visually stunning, action-packed animation film GLYCH.  A preview of the animation will be unveiled Thursday, February 17, 2022 at Carnegie Hall’s Afrofuturism virtual arts exhibition.

Set in the fictional Nuuru Galaxy, the story follows Princess Kiama, a fugitive on the run from the Galactical Council, and Miungu Nyekundu (“the Red Gods”).  On her journey, Kiama discovers the lost ancestral ability to “glych”, which allows members of an elite bloodline to enter a parallel reality through a tear in space and time.  Kiama, now in hiding and grieving the loss of her mother, gets a startling message from an unexpected visitor.

The entire series unveils the legend of Kiama, who after the separation from her parents and with a kingdom under political siege, must learn the true meaning of bravery and face her destiny with the help of loyal friends along the way.

The epic tale is an African sci-fi action-adventure and the brainchild of writer, director, and producer Muniyra Douglas and director-producer Somto Ajuluchukwu.

And the opening track,“On to the Next” is a feature from Toronto rapper King Bliss, produced by Bes Kept, and mixed and mastered by hip-hop great DJ Mercilless, who’s worked with Ghostface Killah, Styles P., and many more.