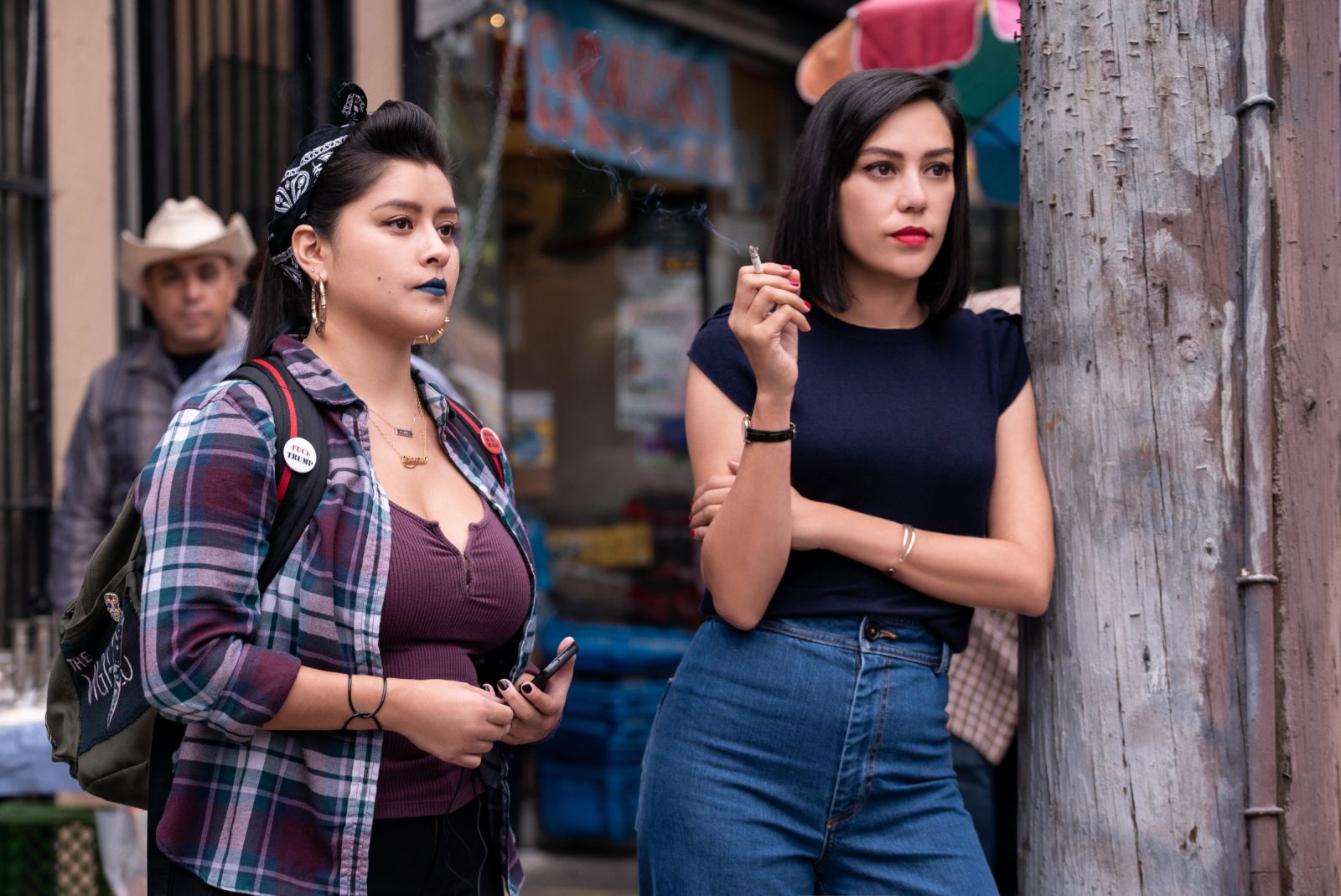 In Vida’s first season, sisters Emma (Mishel Prada) and Lyn (Melissa Barrera) Hernandez return to their childhood home in Boyle Heights after their mother Vidalia or Vida (Rose Portillo) unexpectedly dies. Vida leaves behind a grieving wife Eddy (Ser Anzoategui) and a community of queer women for whom Vida’s bar was a safe space in the neighborhood. Lyn had left home of her own volition, seeking wealthy men to keep her in an Instagram influencer lifestyle. Emma, on the other hand, had been kicked out of her home as a young teen to live with her grandmother in Texas because Vida found out she was gay. Finding out that her mother was not only queer too, but ended up marrying a woman, sends Emma way into her childhood trauma. Grieving the loss of her beloved mother as well as her most recent sugar daddy, pinche Lyn opens up a bunch of credit cards in her mom’s name as well as takes up with her ex Johnny (Carlos Miranda) who is now engaged and expecting a baby with his fiancee Karla (Erika Soto). Ay qué drama.

By season two, and after a hate crime that leaves Eddy in the hospital, the Hernandez sisters decide to stay in L.A. and remake Vida’s bar into a social media-ready hotspot for the neighborhood. In the meantime, a local group of activists Los Vigilantes headed by Johnny’s little sister Mari (Chelsea Rendon) are trying to slow the pace of gentrification in their barrio. Everyone’s nemesis Nelson (Luis Bordonada) has been buying up key properties to blanquear BoHe — the hipster basura name for Boyle Heights as it gentrifies — and has his eyes set on Vida’s bar too. As Mari says, this isn’t gentrification when it happens from within the community: It is gente-fication. A special kind of betrayal.

These days it feels like a challenge for a show made up of 30-35 minute episodes to tackle even one social justice issue in a substantive way. But Tanya Saracho’s sophomore season of Starz drama Vida addresses several of the main issues facing Los Angeles’s Latinx community with a mostly commanding touch.

As Emma struggles to process her mom’s sexual identity, especially since she had so cruelly punished Emma for hers, this standoffish self-protected woman slightly opens up herself to the queer community she left behind, including the first girl she ever loved. But because Emma isn’t so quick to define herself as gay — “I don’t identify as anything. I’m just me.” — she finds herself once again at odds with women who cannot accept her as she is. In a particular brutal conversation with her almost-girlfriend Cruz (Maria-Elena Laas) and her crew, they shame and roast Emma for not choosing to align herself with their sexuality. The battle lines drawn over the neighborhood extend way past the developers. But because of this hateful exchange, Emma connects with Nico (Roberta Colindrez), the hot-as-chamoyada Latina Shane who believes that, “When you meet the right person you don’t have to change who you are. They make you a better version of yourself.” Excuse me for a second while I swoon. Otra vez.

But where Vida isn’t so successful is in its discussions of colorism — or light-skinned privilege — in the Latinx community. While the show does include dialogue discussing this key issue over a number of episodes, there actually are no dark-skinned Latinx characters in Vida. The only darker complected people are extras with no lines or names. In one instance, Lyn finds out from their new tenant Marcos (Tonatiuh) that Nelson actually left a date with his friend because she was darker skinned in person than on her profile picture. But we never see the friend; this would have been a good moment for a flashback and some proper inclusion. It’s great that Vida acknowledges colorism as a problem, but I hope that in season three and beyond they’ll address this more concretely by hiring dark-skinned actors and writing significant roles for them in the Hernandez women’s story.

It’s also rather unfortunate that two of Emma’s love interests are actually her employees, which puts her in some seriously unethical territory. And in particular, as it relates to her ex-con handyman Baco Nava (Raúl Castillo). What Emma does to him is so gacho y fea I felt a little ill watching it play out. This is really where Vida’s biggest failure is in its sophomore season: Gender-flipped workplace sexual harassment isn’t an issue at the moment. Harvey Weinstein just paid $40+ million to settle his lawsuits and likely will never go to jail for the alleged rapes. We don’t need a narrative with a woman being sexually inappropriate in her workplace to muddy these waters further and deflect the #MeToo conversation.

Those quibbles, as important as they are, aside: At its heart, Vida is about family. What are the ties that bind us and how do we measure, weigh their power? Is it blood and DNA? A zip code? Sexuality? Shared cultural ancestry? The legality of marriage? History? All the above? Or a combination? When Eddy finds out that her marriage to Vida wasn’t actually legal and she is not entitled to a third of Vida’s building as she thought, she goes into her own tailspin. And because Vida was a categorically horrible woman and a compulsive liar, Eddy too finds herself metida in Vida’s trail of disaster left behind just like her daughters.

As light-skinned Mexican American women, both Emma and Lyn are often approached as outsiders in their own home because of how they act, dress, and speak, prompting Mari to brand them “whitetina putas.” Yet, their bar and apartments housing many undocumented Latinx people are for the benefit of the very community who often looks down their nose at them for not being Mexican enough. Mari’s antagonism toward both Emma and Lyn for different reasons spins on its head when she gets kicked out of her own home for something that wasn’t her fault and Emma is the one who takes her in. This show of primal sisterhood puts Mari at odds with Los Vigilantes who consider the Hernandez sisters as much gente-fiers as that cabrón Nelson. Community is complicado.

Vida is a rare show that passes the Bechdel Test with almost every scene in each of the 16 episodes. And season two even went so far as to call out Trump by name for his mal descarado policies that are affecting the Latinx and queer communities in equal measure. Anda anda, Vida. It might be as messy as its characters to some extents, but Vida is still a vital installation in the growing Latinx American visual media canon. The difference in intensity of season one into two is staggering and powerful; everyone from writers to actors to production has gone all in. Vida is fearless and moving art. I’m looking forward to seeing it continue developing on all these foundational themes it has set, y mas espero.