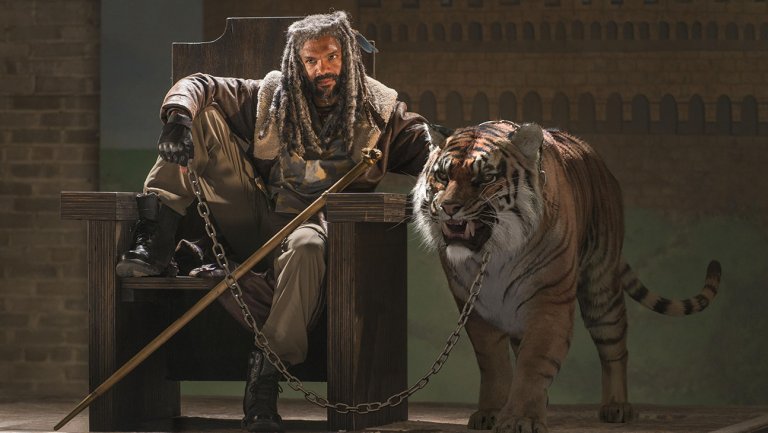 In “Some Guy”, episode four of The Walking Dead, one of the communities suffers a huge and heart breaking loss that may prove impossible to recover from.

It’s day-break, Ezekiel walks into his bathroom, takes a deep breath and performs his morning ritual: shave, palm roll his locs, put on his chain, shirt, armor, hair adornment, and his trade mark jacket. With a subtle head tilt, his demeanor changes drastically from weariness (with slightly hunched shoulders) to upright and commanding. He gives his reflection one final glance and walks out the door with his familiar, confident swagger.

As he watches his soldiers say goodbye to their families, Ezekiel has a look on his face that reads as both wistful and determined. Before they walk through the gates of the Kingdom, he thanks them for their bravery and cautions of the challenges that await them, and says that despite the dangers he still smiles. I loved this speech; it was so inspiring and earnest because Ezekiel showed his vulnerability, and when he said “and yet I smile” his voice was gruff with emotion, as though he was on the verge of tears. The scene closes with the community surrounding him, as he shouts “WE ARE ONE”.

In the blink of an eye, and without warning, the scene switches from a moment of camaraderie to one of death, as we see the slain bodies of Ezekiel’s people on the ground. With a shout, he emerges from a pile of bodies, and in despair he realizes that they’re all dead; the father who kissed his wife and child goodbye, the mother who accepted a small token from her son, gone. In less than a minute, Ezekiel’s life and those of the people back in the Kingdom have once again changed forever. With a look of horror on his face, he watches as one by the bodies reanimates; his friends are now walkers, all but one. One of the soldiers survived and comes to Ezekiel’s aid. Ezekiel tells him to leave and save himself but he refuses. Looking on, I had one thought: “Where is Jerry? Where is my boo?”.

I won’t lie, I was near tears, I knew I couldn’t take it if Jerry died; that would be too much, not only for me but Ezekiel also.

Before they make it to the gate, one of the Saviors kills the unnamed soldier, and because Ezekiel is still reeling from what happened, he doesn’t fight back and is taken hostage. As the Savior pushes Ezekiel ahead, he proceeds to taunt Ezekiel about using his people for his own benefit, that their deaths are on him and he’s a “meaningless con man in a costume”.

During another monologue (sigh) the Savior decides that it would be easier for him to kill Ezekiel, but before he could swing the sword to decapitate Ezekiel, a man screams and suddenly the Savior is cleaved clean in half. There is only one person who could do something like that—Jerry! I shout in triumph, YEESS JERRY IS ALIVE, ALL WILL BE WELL. Was I being dramatic? Sure, but I know for a fact I’m not the only one who cheered.

Jerry is a cinnamon roll who must be protected at all costs.

Carol—who had separated from the group before the shooting began—found the Saviors they were following, and it turns out they had the guns Rick and Daryl have been looking for. As she’s watching them load the ammunition onto the back of a truck, she notices Jerry and Ezekiel trapped between the gate and walkers, and I’ll be honest I wasn’t sure what she would do. But as always, my girl came through and chose to be the hero. She chose to save her friends. Worrying about the guns, Ezekiel says they have to get word to Rick. Just as Carol is about to respond, the sound of a motorcycle engine can be heard in the distance, and it’s an engine I’ve come to know quite well over the last few seasons. Daryl and Rick are in pursuit of the truck *fist pump*. Rick manages to jump from his jeep into the truck’s cab and drives it off the road.

They got the guns *double fist pump*.

Ezekiel, Jerry, and Carol make their way back to the Kingdom on foot and come to a ravine filled with walkers. With shock beginning to set in, Ezekiel tells them to leave him behind. He rejects Jerry calling him King, and says he’s just “some guy”. As we see the despair on his face, a growl is heard and Shiva jumps into the ravine to save him from the walkers. Overcome by the walkers herself, she falls to the ground and is killed before their eyes.

This scene broke me. I screamed and wailed, with tears rolling down my face. I cried not only because I loved that CGI cat, I cried because I knew this was the one thing that might break Ezekiel. After losing his soldiers, he then lost Shiva. She wasn’t just his pet, she was his friend and a symbol of hope that he could overcome his fears to become a hero. But now that she’s gone, who will he be?

Before I wrap this up, I just have to share one of my main thoughts on this episode, and it’s about what the Savior told Ezekiel. At first I thought “hmm how insightful of him, because this is exactly what Ezekiel probably thinks about himself, heck he practically said the same thing verbatim to Carol when they first met.” But during my second watch of the episode, I realized that this is a running trope with The Walking Dead. We’ve seen the Saviors have these kinds of conversations with Rick, Daryl, Carl and other members of Team Family. I can see that the writers are using the Saviors as tools to get into the psyche of Rick and his people, but it’s hypocritical and disingenuous. Don’t you think it’s odd that all of Negan’s people seem to have the ability to psychoanalyze literally everyone but themselves and Negan?

This dude told Ezekiel that he’s a fraud, and isn’t a good leader, but umm…Negan is literally the worst. He walks around with his own prop, delivers monologues likes he’s at a summer theater festival, and has managed to influence his followers so much that they refer to themselves by his name. A person who gains followers through fear and intimidation is no real leader at all.

There is no way that Ezekiel should be made to feel as though he’s a bad leader. The persona he puts on is one meant to inspire and instill hope. Like Rick and Maggie, Ezekiel’s purpose as a leader is to be better for his people, to protect them even at the risk of his own life. The Saviors no longer have an individual identity; they might as well be part of the Borg Collective.

The Walking Dead airs every Sunday on AMC at 9/8c. Here’s a sneak peak for next week’s episode, “The Big Scary U“.