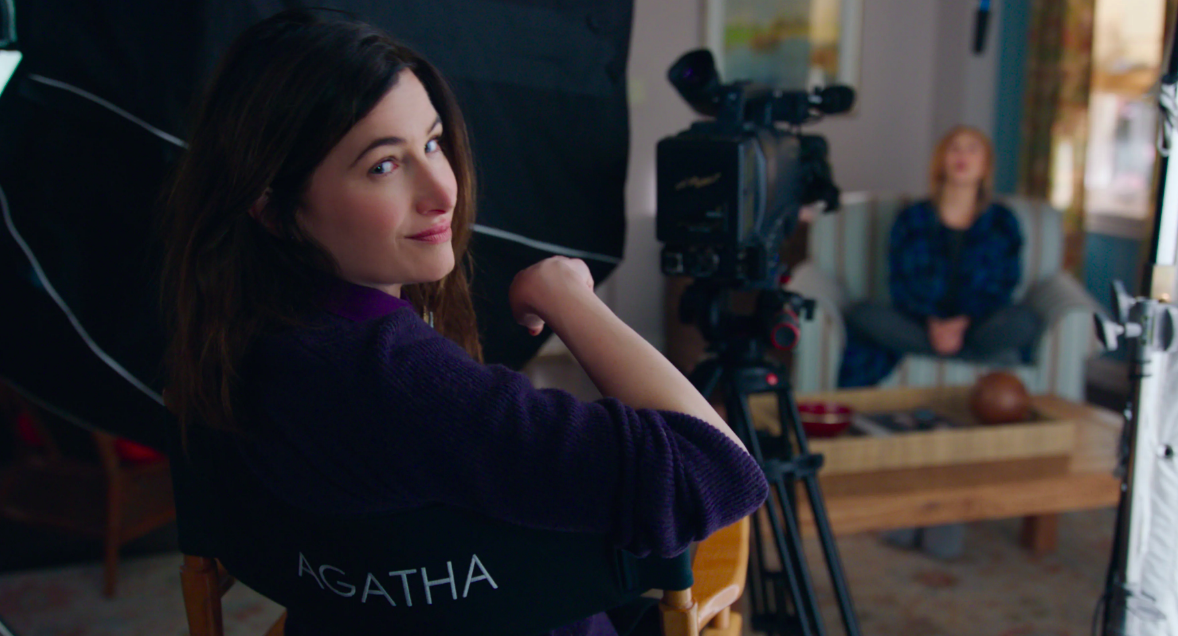 Salem, Massachusetts, 1693: Agatha Harkness is being dragged to a stake by her coven and accused of practicing dark magic. Agatha claims that she didn’t break the rules but bent them and she can’t control her powers. The coven members chant a spell and release it on her, but it backfires and results in their deaths. Coven Mother does her best to vanquish Agatha, who claims she can be good, but Agatha just absorbs Coven Mother’s power. Agatha walks away with a trinket.

Back in modern times, Wanda questions Agatha on her children and attempts to use her powers on her but Agatha has protection spells on each wall. Only Agatha can use her powers, and she can’t help to wonder why Wanda is uninformed on this practice. She also reveals how she waited for Wanda to reveal herself, how she brought fake Pietro about, as well as how she sensed the spells that were placed in Westview. Agatha even shows off her skills as she revels in Wanda’s powers, demanding to know how Wanda was able to do all of this. When Wanda states that she doesn’t know, Agatha uses her own powers to force Wanda to relive some memories, also threatening the twins in the process.

First memory, we are introduced to Wanda’s parents. Their dad wasn’t able to sell the video tapes of shows like Bewitched, I Love Lucy, Malcolm in the Middle. Tonight is TV family night but Wanda is not just watching the memory, she is also acting in the memory, too. Young Wanda picks Season 2, Episode 21 of The Dick Van Dyke Show.

While there are people fighting outside, the family quietly enjoys the show when they are hit with an explosion! When young Wanda wakes up, Mom and Dad are smashed under the rubble, and Pietro pulls her to hide under the bed. A Stark Industry missile lands in front of them while outside. They hear the voices of others. Somehow the TV is still playing. Young Wanda, remembering the episode, reaches her hand out as if she could stop it but she is pulled back. Agatha asks if Wanda was able to stop the bomb by using a hex, but Wanda states that the missile was defective. She and Pietro were huddled there for two days. Agatha is not impressed with baby witch Wanda. She wants something more for the recent level of powers.

Second memory is Wanda after she joined an anti freedom terrorist organization and is within a facility where she is instructed to tough the scepter. Isn’t that Loki’s scepter? The gem that is in the scepter comes out and goes near Wanda, revealing itself to be a bright yellow stone. In fact, it’s the Mind stone. When Wanda looks into it, she sees a figure then passes out. Wanda is put in a room, watching The Brady Bunch. While scientists review her recording in the test facility (nothing on her being near the stone), they miss out on her using her powers to switch off the TV in her room. Agatha has a theory on Wanda but needs more information.

Third memory is of Wanda in the Avenger’s compound, the first home she ever shared with Vision. Wanda invites Vision to sit and watch Malcolm in the Middle with her. Vision asks Wanda if she would like to talk about her feelings on Pietro’s death, but she shuts down the offer initially. She tells Vision how the sorrow takes her over. Vision gives his input on what he hasn’t experienced in loss and what he thinks love is. He laughs at a moment in the show, finally understanding the humor. Agatha recaps the deaths that Wanda has gone through, asking what happened to her when Vision wasn’t able to help her through his death. Wanda states that she can’t do it, but Agatha pushes for Wanda to figure out what happened when Wanda wanted Vision back.

Fourth memory, Wanda is at SWORD headquarters asking for Vision’s body back so that he can have a funeral. Security receives a call, allowing her to walk in and speak to Director Tyler Hayward. Tyler shows Wanda where Vision is. Vision is being taken apart. Tyler states that they are dismantling “the Vision” due to him being the most powerful weapon ever, stating that he can’t allow that much money worth of vibranium into the ground after accusing her of wanting to bring Vision back “online,” i.e., back to life. He will allow her to say goodbye to him there, claiming that Vision isn’t hers.

Wanda doesn’t take that very well and goes down to see Vision’s body. As she stands over Vision, she states that she can’t feel him and leaves. When Wanda gets in her car, she looks at a paper for her in the passenger seat. She drives away from the facility to Westview, New Jersey. As she drives through, seeing the community and people trying to live their lives, she stops at a drive through next to an empty lot. She opens up the paper, which is a property deed with a heart drawn around words saying, “To grow old in, V.” Oh, that really hurts. Wanda walks through the lot, tears streaming down her face. Grief stricken, she unleashes her pain and power, building a house in the process and turning the town black and white, as well as creating Vision. Once finished, Vision looks at her and welcomes her home, suggesting they stay in that night, and gives her a kiss before they turn on the TV.

Real time Wanda gets a view of the house with the cameras, and studio audience sits where Agnes is watching and clapping then disappears. Instantly, Billy and Tommy are screaming for Wanda to come help them. Wanda rushes off the stage to find the twins in Agatha’s clutches by their throats. Agatha claims that she knows what Wanda is a dangerous myth who is able to spontaneously create life, using Chaos Magic, which makes Wanda the Scarlet Witch!

Post credit scene: Tyler Haywood states how they dismantled and put together Vision’s body to get it to work when all they needed was power from Wanda. Utilizing the magic off the missile they sent Wanda, Tyler’s team brings Vision back to life.

I literally screamed at the post credit scene before they showed Vision. The moment that I realized that Wanda didn’t take Vision’s body and created the life she did from pure magic, I knew what Tyler was up to. This whole time I was afraid of us losing Vision when the worst thing is that he would be used as a weapon. Agnes just wants Wanda’s fierce powers for who knows what and frankly that is not the top of my concerns right now. Can someone explain to me where the Avengers were after Wanda realized that Vision’s body was missing? His body shouldn’t have ended up in the hands of any government. We know what colonizers are capable of! Wanda has truly gone through a lot when it comes to her life. She hasn’t had it easy. For me, it was nice to see the little moments in life between the Avengers movies.  There’s only one episode left for this season. My only hopes are that the twins live, that Wanda doesn’t lose her created Vision, and that she sees Monica as an ally. I wonder what will happen when Vision sees the real version of him. Tyler Haywood needs to be taken out now!

Wanda Maximoff, Trauma, and the Power of Dissociation