This week on Hap and Leonard, the show offers up a flashback that finally tells follows Florida (played by Tiffany Mack) as she goes about her mysterious work in Grovetown. During this time, she tells off the head of the Klan, has a “come-to-Jesus-meeting” with Sheriff Torque Nut aka Chief Cantuck (Corbin Bernson), and riles Officer Nazi Barbie, aka Officer Reynolds (Laura Allen). She lets everyone know that she ain’t leaving until she finishes her business with her client Bobby Jo Soothe.

Do I have to ask: What the hell is wrong with this woman?

She’s is in Texas, in the middle of known Klan country, alone, black, and female. Those combinations make problematic math on a good day. But, Florida Grange goes into the hornet’s nest like a sharpened pitchfork, not only shaking up the hornets but stabbing a few in their pride before she’s done. All of this to help her client with the sale of a lost master? It doesn’t ring true.

Now, I did see the phone call she took from her ex, Lieutenant Hanson (Cranston Johnson), warning her to leave Grovetown. There are some feelings left over from the breakup and possibly the relationship with Hap (see Season 2 of Hap and Leonard). Maybe her feeling was clouding her judgment?

Whatever the case is, I have serious problems with a black woman traveling alone into Klan country in the time before cell phones. She would have been raised by the black women in her family to never be so stupid. I guess in the show, her acting against that fear to “do the right thing” and fight for her client was supposed to be noble. It perpetuates that dangerous “strong black woman” trope that has come under fire lately. This is one of the reasons why. To prove independence, so-called strength, and the ability to do her job despite the stereotypes she undoubtedly fought every day to prove herself. Florida probably did a lot of things that were dangerous and stupid in the process. 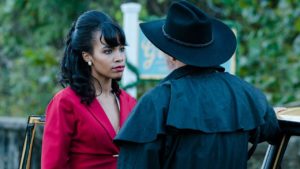 Florida’s act of telling off the powerful men in the town and stomping all over the etiquette and established boundaries seem just as stupid and dangerous. Here too, I question her reasoning. But, a look at the plight of the black female professional in 1990s East Texas shows that the odds were against her when it came to building a reputation and garnering respect amongst her peers. In fact, if you will remember the talks that Hap (James Purefoy) and Lt. Hanson had about her, they always talked about her independence, stubbornness and desire to do things her way. Here, too, we see that she already has begun building a reputation for being fearless and headstrong for her clients. Could her need to break through the racist and sexist atmosphere have led to her tendency to court danger in the way she did at Grovetown?

I think that, at this juncture, she had made a name a reputation for herself, in fighting for equal footing, that ultimately led to an escalation in that danger. She became known as the lawyer who wasn’t afraid of anything or anyone because she had the law on her side. Florida had painted herself into a corner in this Grovetown case, and I think that should be forced to pursue it even if she had misgivings or doubts about her safety. Failing to do so would have jeopardized everything she had built for herself, and success on the case might just level her up.

I would really like to know what the fans thought about this, Florida going at Grovetown alone.

She was the big reveal in the episode, but not the biggest surprise. The episode actually began with a look at how Bobby Joe Soothe (Theodis Ealy) may have been murdered. He rescued mute Belinda (Sydney Wease) from young leches out to rape the girl. They were the two in the pickup who worked for Truman Brown (Pat Healy). Soothe was alive when he left them.

He then met Sneed (Evan Gamble) and Officer Nazi Barbie coming out of the woods. They arrested him unharmed. Soothe even survives a short stint in jail where Officer Nazi Barbie tells him, “Just where do you think we tolerate black boys messing with white girls in this town.” That’s not even the worst thing she said. (“You got a belt?” was a question that no one wanted an answer to. Too many echoes. He left the jail unharmed but surprised. She left him free after Soothe asked for a lawyer and Sneed backed him up. But we all know that release was not a joyful move. He was a dead man walking at that point.

Hap and Leonard (Micheal Kenneth Williams) find Florida’s car in the middle of the woods, along with her recorder. That’s the source of the flashback.

My guesses for the murderer have changed. I’m going with either the DJ (sorry Andrew Dice Clay) or Sonny, the owner of Rockets. I am now convinced that this was over money and those tapes. Somebody wanted them and killed her for it. Maybe one of them.