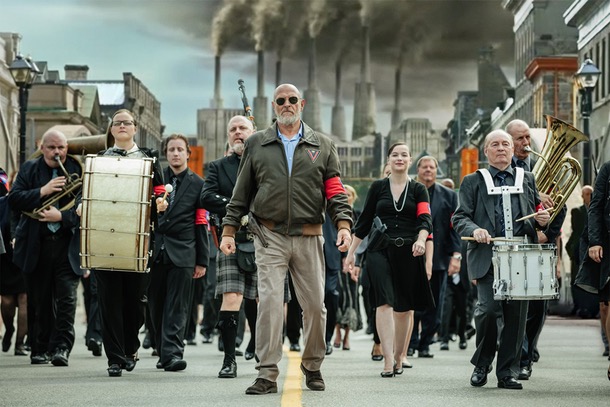 I’m assuming if you’re here then you’ve seen the sixth episode of American Gods. If not, you might want to go ahead and jump ship now because this show is about to be spoiled more than milk left on the counter for three days during a Texas summer…

This Coming to America episode really shook me. It showed Christianity at its worst and best at the same time in ways that are all too real. On the one hand, we have a group of people (men, women, children, young, old, and everything in-between) praying to Jesus for safe passage across the water. And when they finally make it across, thanking the Lord for their survival, a group of people set to defend their nation and their borders open fire on them–all in name of God, of course…

And to make matters worse, after Jesus stepped in (literally) to help them on their journey, he’s gunned down with Vulcan branded bullets in the same way he was nailed to the cross. Yet, the ones doing the shooting are holding their own crosses–all of it a hypocrisy of doing God’s will by killing Jesus Christ alongside innocent people. 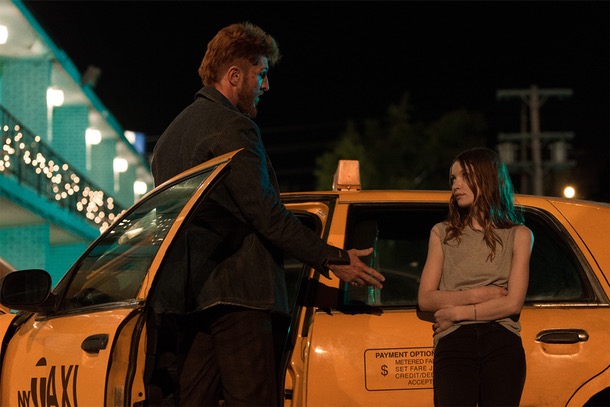 Mad Sweeney makes it back to the  Starbrite Motel to confront Laura–who I’m now calling Dead Wife, by the way. Mad Sweeney realizes that in order to get his coin back, Dead Wife has to give it to him, and Dead Wife is only going to give it to him if she doesn’t need. So he’s going to help her get “resurrected”. He tries to hot wire a taxi, and the taxi belongs to none other than our good friend, Salim! Salim’s been driving in the direction of Mecca looking for the jinn, and Mad Sweeney promises to take Salim to him. This should be fun.

So three of them, each needing something from the other, set off on the road, making a very interesting trio. It’s like a bad joke waiting to happen. A taxi driver, leprechaun, and a dead woman walk into a bar… And they do just that.

Both Dead Wife and Salim have died–one physically and the other metaphorically. Salim doesn’t know what his name is, he doesn’t know who he is, and he’s trying live with his new identity and his new life. Dead Wife has been given a new life, an After Life more specifically, with a shameless and selfish focus on getting Shadow back.

Then there’s Mad Sweeney… there to provide us with worldly wisdome wrapped in sexual metaphors.

After Wednesday and Shadow escape the massacre at the police station, they make their way back to their car where Wednesday hastily drives Shadow away from the motel before he can see Dead Wife again. This is all thanks to his ravens (named Thought and Memory–English translation) who fly all over the world and bring him information. They help keep the All-Father all-knowing.

Now, Wednesday and Shadow are headed to Vulcan, Virginia–a town riddled with guns, smoke, and fire, and American flags on every block. As soon as they pull up I automatically know this is not a place I’d want to be. Like… I’m staying in the car. Anyway, Wednesday meets up with his very, very old friend Vulcan–the Roman god of fire, metalworking, and the forge, whose name was given to the volcano.

Vulcan has found a way to franchise his faith–the scariest idea ever–and has built an entire shrine to himself in the form of his company dedicated to producing firepower. And man do the people worship at his altar. After the human sacrifice of his employee, Vulcan speaks to the crowd at the celebration while a cover of I Put a Spell on You plays in the background. They shoot their guns in the air, and the town rains bullets, the same bullets that killed Jesus in the beginning of the episode. 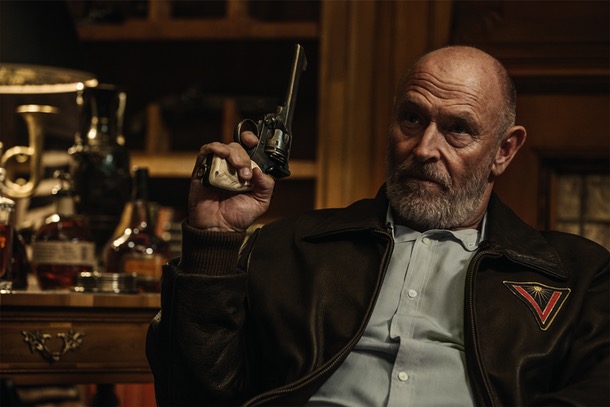 We think that Wednesday is there to recruit Vulcan, but it becomes clear pretty quickly that Vulcan is Sketchy McSketch Sketch and screams of white supremacy. He won’t even serve Shadow a drink. Oh, HELL NO. From the way he looks at Shadow, to the lynching tree in his front yard, to the heads of animals and the copious amount of guns hanging on his walls, a good ally Vulcan does not make.

He has his power now, and he’s made it in the modern world. People worship guns; therefore, people worship him. He doesn’t need Wednesday’s war and is not in the same position, so he has no vested interest in siding with him. Vulcan points out that Wednesday could sacrifice himself as he’s done before, but he’s not really feeling that option. He makes Wednesday a sword fit for a god, then Wednesday turns around and decapitates Vulcan with the very same sword and with every intention of blaming the very same new gods Vulcan has sided with, pissing on his grave in the process!

In the words of Shadow: Holy shit!

“Did you have a genie in your bottle?” ~Mad Sweeney

“What came first? God, or the people who believed in them?” ~Wednesday

“Neutral in the face of injustice is on the side of the oppressor.” ~Wednesday

“The power of fire is firepower.” ~Vulcan

Wow. From the opening scene to the closing scene, this episode was nothing short of poetic.

Vulcan felt powerless and got his power back when he put a gun in people’s hands. He got his worship back too, because in this story, every time someone fires a gun–and this is America, so that happens A LOT–it’s done in his name and honor. It’s not the fire of the ancient times, but a different kind of fire–the kind of fire that’s been harnassed into little handheld volcanoes we like to call guns. The worship is the same, but the tools are different.

It’s all about the idea of power and people having the power to mask their insecurities and defend their safety with bullets, especially those people who believe their safety is threatened and live in fear. Hell, even Salim said he was scared of all the Jews and Black people in New York. That’s a lot of people, bruh. But I love me some Salim, so no shade.

Fear is powerful. It is the most powerful aspect of the human condition. Almost every action we take or don’t take can be traced back to some form of deep-rooted fear. Fear of rejection. Fear of judgment. Fear of others. The list goes on and on… And a group of people in fear are the easiest to control and manipulate. Vulcan knew this, and by putting a small yet potent piece of metal into someone’s hands, he made them feel like gods themselves.

It’s dangerous, it’s scary, and it’s also very real. Because yes, this country is far more concerned with the right to own and carry a gun than the right for someone to have access to healthcare. And this country worships the gun like no other place… Talk about an American god.

Yet even after all of that, we end on a beautiful note with Salim giving honor to his god in his sincere form of worship. Just look at that beautiful sun. I love Salim!

And lastly, I need for Shadow to get his head in the game and stop obsessing over Laura. Oops. I mean Dead Wife.