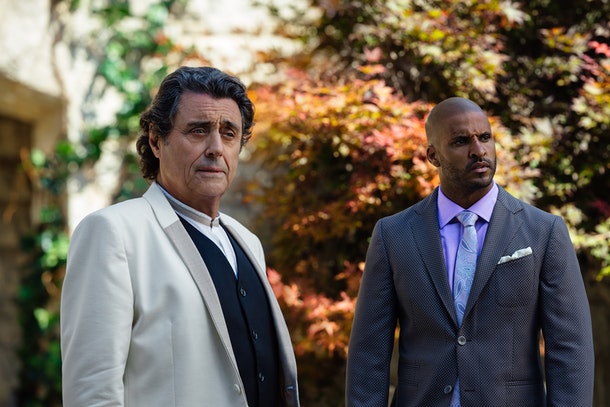 There’s so much! There’s just so much!

“To keep the Goddess on my side, she demands a sacrifice.”

We have two goddesses here: Ostara (Eostre) and Bilquis, each with their power being stripped away by men, each trying to make due with their place in the modern world. So, let’s start with Bilquis. Yasss, Queen. Mr. Nancy gave it to us again with a powerful story. He told a story just like Mr. Ibis did in the last episode–only this time the story interests me much, much more. What a powerful image it was to see people literally worshiping this beautiful Black woman, to see a woman being worshiped in a land where they are currently oppressed and silenced. In her temple, Bilquis wore the same jewels she stared at in the museum, and now we see why. My girl was gettin’ it back in the day!

Enter Bilquis the 1970’s Dancing Queen, and I lived again.

Kings tried to knock Bilquis off her throne, and they never succeeded–that is until they did. Because of male fragility and fear, they eventually “grabbed the power they were too scared for women to have” because they felt threatened *insert epic eye roll here*. It’s a clear example of how men will find any way to cut a woman down and kill a woman’s power–and not just any woman’s power, but a Black woman’s power, especially. “They forced our queen into the backseat,” Mr. Nancy says, which is just how Black women have been made to feel since time.

We see firsthand the “cruelty of men threatened by strong women” as Bilquis watches men physically tearing down her legacy and demolishing her temple. When she’s at her lowest point, Technical Boy shows up to offer her a “new” form of worship #GetConnected. And in typical Shadow fashion, he doesn’t see the purpose of Nancy’s story–they need to get themselves a queen.

Bilquis’ story got me thinking about Coretta Scott King being sidelined and bullied during the Civil Rights Movement (like so many other women) after her husband’s death by men she thought were her friends. It got me thinking about Hatshepsut, the ancient Egyptian queen who had to portray herself as a male king and whose temples were destroyed by her stepson once he became Pharaoh. He too was threatened by Hatshepsut’s power and reputation, yet despite his best efforts to erase Hatshepsut from history, she is known today as one of the greatest pharaohs of ancient Egypt.

I also thought about the First Council of Nicaea in 325 A.D (yes, I went there–this is Black Girl Nerds after all), the all-male council established by the emperor Constantine that helped determine, along with subsequent councils over the years, the contents of the Bible–a book that would be used and abused throughout the centuries to justify “keeping women in their place” along with countless other atrocities. Ironically (considering this post), it’s also the meeting that determined the date of Easter.

In an interview with Black Girl Nerds, Yetide Badaki spoke at length about Bilquis and what her representation means. When asked what advice she’d give Bilquis and what lessons we as Black women can learn from her, her answer was simple, “remember the greatness within.”

And now we have Ostara, the Goddess of the Dawn. She’s the reminder of the origins of what we now call Easter–my favorite holiday of the year! It’s her day, but it has since been usurped by the many faces of Jesus who are all up and through her house. Every Easter symbol we think of today can be traced back to some ancient ritual preceding Christianity. The eggs are signs of fertility. The symbolism of spring is new life and resurrection. And like most things from ancient history, those symbols and origins have been lost and forgotten, replaced with commercial exploits. Media even admitted to it when she came to Ostara’s house. And don’t even get me started on Christmas…

Finally, Shadow (as slow as ever) realizes he’s in the presence of gods. Dressed in their Easter Sunday best, Shadow and Wednesday try and woo Ostara, and I have to say that lilac is definitely one of Shadow’s colors. I also have to say the food in Ostara’s house looks delicious. Anyway, Wednesday’s manipulations are exposed again when he lies to Ostara about the death of Vulcan. And even though Shadow literally has his “come to Jesus” moment with the light shining behind Jesus’ head in the shape of his Byzantine art inspired crown, Shadow still cannot believe.

“Offer me that deathless death.”

Speaking of Resurrection Day, Dead Wife arrives at Ostara’s for her chance at a new life, of course, and is sewed up with Ostara’s butterfly pin. But Dead Wife was killed by a god, and there’s no undoing that.

Mad Sweeney confesses that he did kill Dead Wife on Wednesday’s orders *coughs*. So we now know Dead Wife was sacrificed because Wednesday wanted Shadow, and in order to get Shadow, Dead Wife had to be out of the way. The failure of the casino robbery, Shadow’s prison sentence, Dead Wife’s death, all of it was Wednesday manipulating the situation. I will be very interested in seeing how that all plays out. However, this in no way, shape, or form excuses Dead Wife’s behavior, and I really wish we didn’t have to end on her note.

Throwback Easter Egg: in Git Gone, which highlighted Dead Wife’s backstory, Wednesday’s ravens were surreptitiously shown spying on her and Shadow throughout the episode.

Let Wednesday give us all a history lesson on prayer and reward–the ancient contract. Because in his eyes (or eye), we are all ungrateful and know nothing like Jon Snow. Basically, everything we have is a distraction, and I am indeed distracted by the grill in Technical Boy’s mouth. It’s swords and knives and hammers versus guns and firepower. But wait, Wednesday’s got the thunder and lightning, and Odin the All-Father let errrybody know who he really is. Put some respeck on his many names. You will also respect Ostara because she has taken the spring, and if you want it back, you better pray for it.

The war is on. And now Shadow believes.

Bilquis & Ostara. The final episode was about the queens, and I loved every second of it. These men, these gods, could get nothing done without the goddesses on their side–just like in real life. Speaking of life, Kristen Chenoweth gave it to me! And Bilquis is headed towards the House on the Rock in Wisconsin!

“They forced our Queen into the backseat.” ~Mr. Nancy

“Do not confuse confusion for anger.” ~Wednesday

“I have no intention of spending the rest of my days feeding your soul from the vagina nebula.” ~Technical Boy

“…in your Easter bonnet with all the frills upon it…” ~Media

This show has been a visual representation of my three passions: history, fantasy, and books! Needless to say, my expectations for this show were very high, and this season has not disappointed. In only eight episodes, American Gods has given its fans enough to think about and internalize to last until its second season–because the show is just that deep.

So, thank you American Gods for your beautiful writing and emphatic storytelling, for showing us intimacy in the most beautiful way possible, for putting America on blast, and for allowing me to put my Classics degree to good use. I feel and American Gods syllabus in the works somewhere. Until next year…