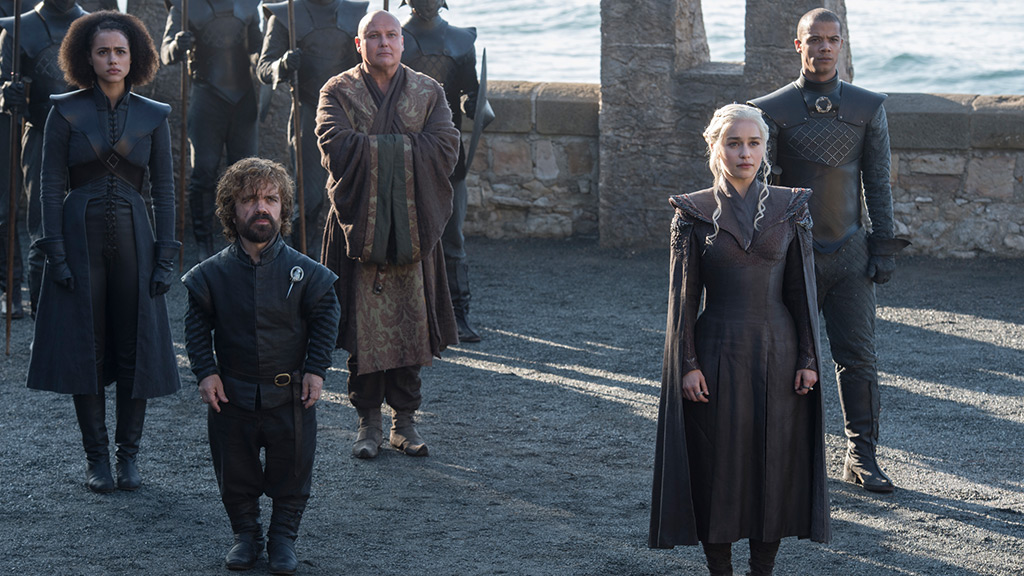 There’s no time to dilly dally with chess-like momentum. Gone are the days of slow intros, introducing us to the drawn-out plans for death and destruction. No, no, no. Game of Thrones is back and so is my night spent in front of the television. Woohoo! Let the killing, the fighting, and the arguing commence. Winter is here!

Fresh out the gate, did you see Arya Stark? If you don’t know what I’m talking about, stop reading now. If you do, then you know she is one kick-butt ninja. Winter sure did come for the House of Frey. I am both extremely impressed and extremely afraid of her. Clearly all her hard work and near death experiences at the House of Black and White have paid off. In the beginning, I thought I was watching a flashback because if you remember correctly, Arya totally channeled her inner assassin and slit Lord Walder Frey’s throat, right after feeding his children to him. But alas, that wasn’t enough because Lord Frey didn’t work alone. What transpired was basically a toast goodbye. A proper way to start a long journey. The dialogue in this opening did wonders to my psyche. “Leave one wolf alive and the sheep are never safe,” says Arya. This girl gives me goosebumps every time.

Another vision of pure adrenaline that gave me goosebumps was the close-up of White Walker giants. You read correctly. I’m talking about giant zombies! How is Jon supposed to beat that? I understand Cersei is legit evil, but I believe Jon Snow has his priorities straight (unlike some people). I love Sansa, but this seed planted by Littlefinger has grown vines that have wrapped around her brain. By-all-means Sansa, yes, stand up for what you believe, have your voice heard. Remind Jon to be better than Robb and Ned. Yes! But, by God, don’t bicker with your brother aka The King of the North in front of everyone. It’s rude, it’s awkward, and it sends the wrong message. The kind of message that gets people’s heads chopped off. The Red Woman isn’t around to bring Jon back from the dead a second time. It was very satisfying to see Sansa cut off Littlefinger with her comment, “No need to seize the last word; I’ll assume it was something clever.” Yes, yes, and yes.

The one element that Jon and Sansa seem to agree on, is the enlistment of ALL persons 10-60 years old mining for Dragon Glass. Yes, Jon Snow! Support women! I know it was a proud moment for Sansa, Brienne, and Lyanna. I felt proud just watching. But when Lyanna Mormont said, “I don’t need your permission to defend the North.” I literally put my hands up in praise. Do your thing, girl!

With the North searching for Dragon Glass and focusing on White Walkers, in the South Cersei is searching for allies. Cersei and Jaime aren’t seeing eye to eye on the war ahead, especially since their son Tommen committed suicide at the end of season 6. Her ruthlessness is slowly pushing Jaime away. I want so much, for Jaime to leave Cersei all alone. He needs to be on a “winning side” and Cersei is not it. He should be afraid of her. I argue if she even gets a whiff of doubt or betrayal from him, she will kill him. Cersei has invited Euron Greyjoy and his Iron Fleet to Kings Landing in her search for allies. That scene was comical to watch. Euron and Jaime were basically sparing for Cersei’s affection. Euron makes mention of his “two good hands” and that killing his brother was a “wonderful feeling” that she should try sometime. If that doesn’t say, I’m taking your woman and good luck trying to stop me…I don’t know what does. Yes. Conflict within the house of Lannister is fine by me.

Before I get to Dany, let me mention poor Sam Tarly and the roughest internship I’ve ever seen. It was gross yet a very comical moment for reflection. Literally, everything looked the same going in as it did coming out. Excuse me while I dry-heave at the thought of it. I love Sam. I am glad he has his priorities in order. Find something useful to help Jon defeat the White Walkers. In a Harry Potter-like move, Sam steals some keys and makes his way to the restricted section of the Citadel library. It is in one of these off-limit books that Sam discovers that underground at Dragonstone is a mountain of dragon glass. Yes, you can put two and two together. Where Dany is, is where Jon needs to go. I cannot wait for them to meet. Amidst the poop soup and the discovery of important news, I was given heart palpitations when an arm reached out a cell and scared the crap out of me. The man asked Sam about a Dragon Queen and of course, I knew right away who it was. I’m sure you have guessed, but I’ll say it anyway. Ser Jorah Mormont. I’m excited — very excited.

Off we go to the episode’s namesake, Dragonstone. What an amazing, dramatic homecoming for Daenerys. It’s about time! What I loved about this moment is that it wasn’t dragged out. We see how appreciative she is of her home and how cautious she is with is. The sand in her hands, the removal of the last remnants of Stannis, the humbling moment when Dany stood before the Dragonstone Throne. It was very powerful. Then it’s straight to business. “Shall we begin?” Abso-freakin-lutely!

Let’s go! I’m loving the girl power momentum we have going. I have been waiting for this premiere for so long and it did not disappoint. My only struggle now is waiting till next week to see what happens next. Each time I watch Game of Thrones, I am both exhilarated and terrified. I know I’m not the only one. Check out the reactions from #BlackTwitter here:

There were some fabulous Twitter moments. Let’s keep this train going. I’ll see you all next week for an all new episode on HBO.