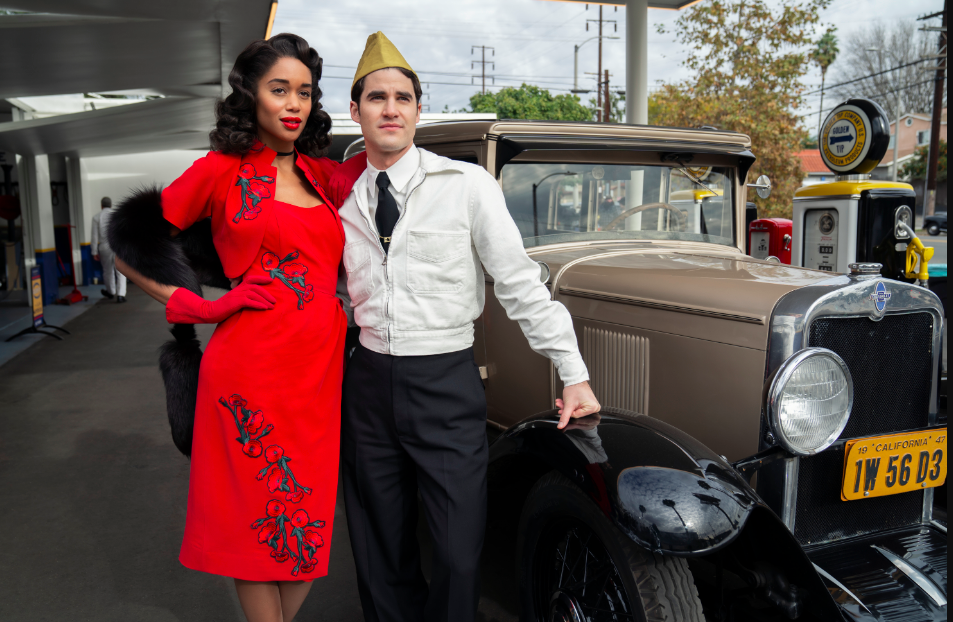 The upcoming Netflix hit Hollywood, created by Ryan Murphy and Ian Brennan, redefines what it means to be a working stiff risking it all to make it big in showbiz.

This whimsical and saucy miniseries is set to premiere May 1, 2020. Ryan Murphy and Ian Brennan are well-known for their work on Glee, Scream Queens, and many more hit shows, so it is no surprise that Hollywood is incredibly promising.

Audiences will be invited to travel back to the post-World War II Hollywood Golden Age and meet unique characters from diverse backgrounds as they try to hit the big time. This heartfelt story traverses the discrimination that aspiring actors and filmmakers from marginalized communities experience for trying to be famous in a straight cis-white-male dominated industry. While the show places viewers in the excitement of Hollywood, it also places us in the midst of the industry’s deepest corruptions. The odds are stacked against these characters due to race, gender, sex, and other biases built into the system, but they are determined to shine no matter what.

Hollywood stars David Corenswet as Jack, Darren Criss as Raymond (I love me some Darren Criss!), Jeremy Pope as Archie, Laura Harrier as Camille, Samara Weaving as Claire, Dylan McDermott as Ernie, Holland Taylor as Ellen Kincaid, Patti LuPone as Avis (OMG, I loooove Ms. LuPone!), Jim Parsons as Henry Willson (the opposite of Sheldon, but still super weird!), Jake Picking as Rock Hudson, Joe Mantello as Dick, and Maude Apatow as Henrietta (yes, she brings the Black girl magic!). If this amazing cast list isn’t enough to sell you immediately, I don’t know what will. From the classic and elegant talents of LuPone and Taylor, to the newer emerging talents of Maude Apatow and David Corenswet, this show adds some delicious flavors to the mix. Speaking of delicious flavors, Darren Criss sold me immediately. He’s been my crush since A Very Potter Musical and beyond. What I’m trying to say, people is this is one attractive cast with scenes full of sizzle and spice that make everything nice and steamy.

It’s not just the cast of hotties that makes this show a knockout, though. There’s a certain soul and depth that Murphy and Brennan successfully explore. From the discrimination that gay men and women of color experience, to the inherent anti-blackness of Hollywood, this is not like many other shows. It may start off with a focus on a straight white marriage, but is quick to begin critiquing normative love, relationships, and power structures.

Hollywood homes in on the cruelty of capitalism, coercion, and manipulation. It does this in a way that isn’t tokenizing gay people, people of color, or underrepresented communities. The show explores important conversations on the privilege of “passing” as white in a racist society, abusing power in the film industry, and the lack of support for World War II veterans after the war. It poses the relevant notions of women demanding to be heard in male-dominated spaces, and the accountability that comes with checking one’s own privileges.

While the show takes on very heavy topics, it still maintains its Hollywood charm and swag. There will be moments when viewers can’t help but dance or hum to the classic Golden Age tunes, not to mention the instant impulse to head over to the Universal Studios Hollywood Theme park after seeing the lot on camera. This series is filled with layers of sentimentality for an era that many of us have never even experienced. It’s got vivacious parties, scandalous affairs, very questionable morals—sounds like Hollywood for sure! Behind the spell-binding glamour, there lies an undeniable sleaziness and grime that will at some points leave you feeling disgusted with certain characters. Other times, you’ll be smiling along with them during unexpected wins and bonding moments. I found myself enjoying every moment of the ride.

The symbolism of the show is also very interesting, as it depicts the upward climb that each aspiring Hollywood talent attempts. The imagery of their literal climb to top of the Hollywood sign is compelling and speaks to the greater message of the show. It also points out the distinct challenges that some characters have that others don’t. It reminds me of the myth of Icarus flying too close to the sun. Each character wants their chance at the spotlight; they’re all willing to take risks that could cause them to go up in flames. Despite the threat of having their whole worlds come crashing down, they’re in it to win it.

Hollywood showcases the struggles of artists and creatives as a whole. When an industry with structural racism, built-in hierarchies, corrupt power dynamics, and elite networks holds the fate of your dreams, there’s the constant threat that all that you love will come tumbling down like the walls of Jericho. Whether they brutally burn or fly high, these characters will continue to mesmerize you even after those final credits roll.