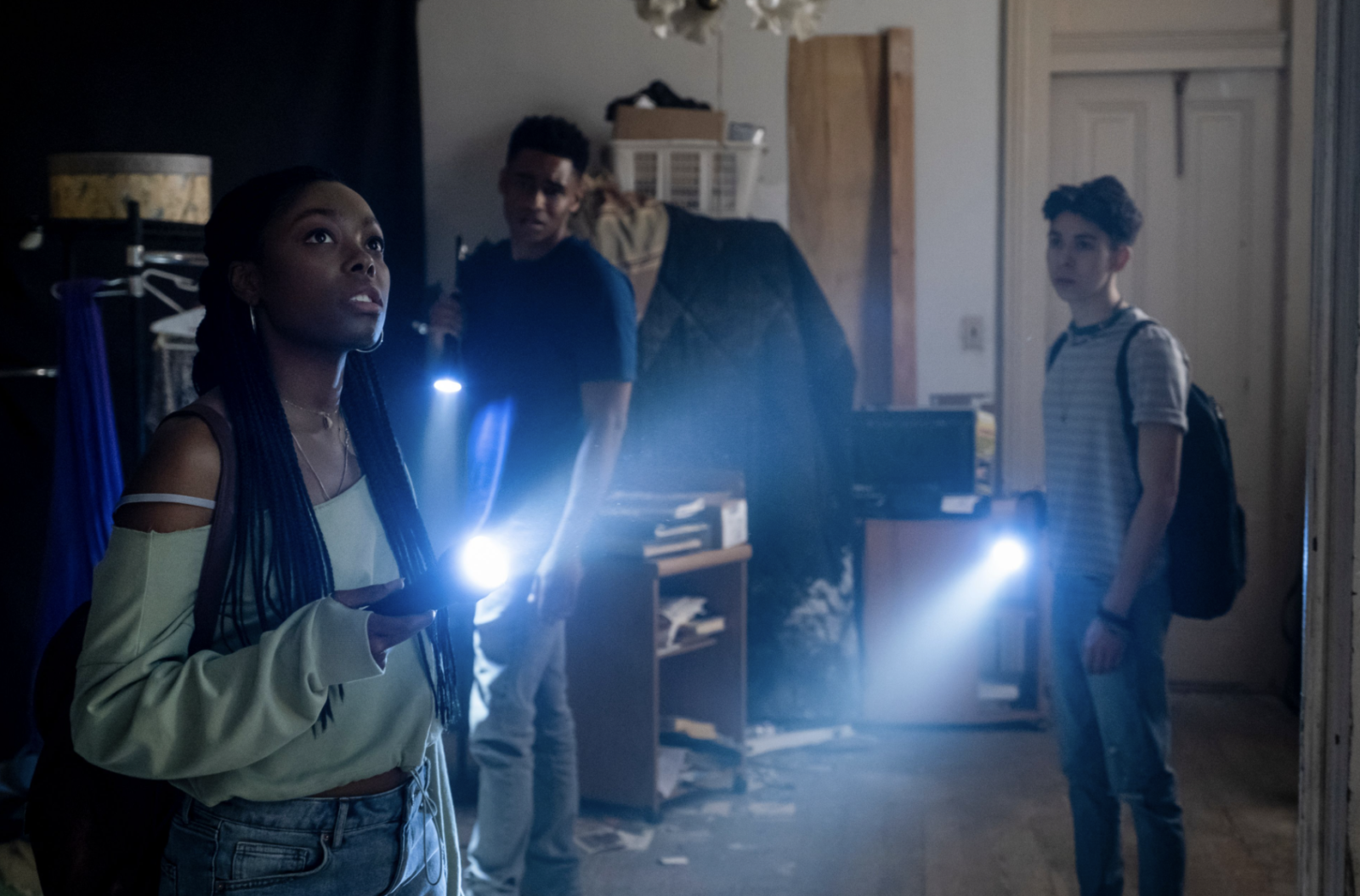 Vampires and colorism and gentrification — oh my! In the second round of Welcome to the Blumhouse films — the popular horror anthology on Amazon Prime — we see there’s more to be frightened of than just spooky creatures. But you should definitely stay clear of them too.

The first entry is Black as Night written by Sherman Payne (Charm City Kings) and directed by Maritte Lee Go in her feature debut. The film follows Shawna (Asjha Cooper) and her best friend Pedro (Fabrizio Guido) as they enjoy the last dog days of summer in the French Quarter. Seemingly the most they have to worry about are bad grades, going to college, and trying to get the attention of cute boys, but before a supernatural creature even graces the screen, we see our protagonists have many more problems on their shoulders.

Shawna’s mother, Denise (Kenneisha Thompson), is a survivor of Hurricane Katrina. It’s been 15 years since the disaster wreaked havoc on the city of New Orleans and the coastal lands, but the lack of actual reconstruction and the ongoing influence of drugs and narcotics has left a lasting mark on some of the citizens. Shawna’s struggles with her mother are only exacerbated by Shawna feeling ugly in her dark skin, even going so far as to cover her arms and wearing hats in the New Orleans heat so she won’t get “blacker.” As for Pedro, he is first generation in his Mexican immigrant family and has the potential to attend a prestigious academy for higher learning, but it means leaving the home he loves and the people he feels responsible for.

Together they juggle the pressure of the world with the carefree fun of being a teenager where your biggest obstacle is trying to talk to a boy you like at a party. Everything is going as expected — Shawna embarrasses herself in front of her crush Chris (Mason Beauchamp) and Pedro constantly vacillates between leaving or not while macking on cute boys— when an early exit from a party changes the trajectory of Shawna’s life.

Black as Night is unique in several ways. Featuring a mostly Black cast with stellar performances by the likes of Keith David and Sammy Nagi Njuguna, the movie introduces diversity to a genre that is either exceedingly white and male or focused on older people. Usually, we think of vampires in gothic dwellings, but the ones Shawna encounters in New Orleans are steeped in the history of the area. We learn of the slave trade in New Orleans and the relics that stand as an homage to it.

The movie is very cute as a fish out of water, coming of age story, and on that ground it stands pretty well. As a horror film, it might need a little work. Ultimately the cinematography and style choices are solid. The mix of the old with the millennial is pleasing and provides a fantastic backdrop. Already considered synonymous with the dark arts, New Orleans is an excellent location. At times, however, the performances are uneven, swinging wildly from overdramatic to bouncy and fun within the space of a minute. There are some moments where it feels like the movie is in on the joke and may be sending up vampire-style films, but no one moment is strong enough to be intentional. Either this movie needed to be done with 100% sincerity or it needed to be tongue in cheek, and it felt as though the direction couldn’t choose a side.

That said, it’s still very fun. When watching I wondered how on earth they would produce a Black horror film knowing the old stereotype that Black folk will quickly “Nope!” out of the room if anything creepy is afoot. But Shawna’s involvement is both believable and understandable. Her recruiting her friends to fight off vampires who also happen to be Black makes for a very cool take on an old classic.

Cooper and Guido’s chemistry is evident. Pedro plays both the devil and the angel on Shawna’s shoulder as she tries to figure out how to be a hero when everyone is telling her no. It’s also important to mention that in a post-Peele world, even though the film deals with issues of race and class, this is not a “white people are allegories for the devil” type of piece. And while I love those properties, I love seeing them helmed in very specific hands. Even though Go is Filipina, she was well versed in issues of colorism that happen in her own community. She was able to speak from her lane and add a refreshing perspective to the film.

It should also be added, though, that perhaps there’s a little too much. Black as Night does take on a lot to the point where the main objective is so big that all of the other side struggles get watered down. There are issues of colorism, gentrification, and substance abuse throughout the film. While I feel Black as Night does an okay job addressing them, it’s the only thing it does. It’s not that I’m looking for social epiphanies from a Blumhouse film. But, for example, the ratio of nonsense Shawna gets for her skin color (her brother played by Frankie Smith keeps calling her Wesley ala Wesley Snipes) and the resolution we get don’t seem to be entirely equal.

This happens even with social issues that are exactly related to the main thrust of the plot. I admit to being a little confused about the motives of our big bad. They are specifically turning the displaced and disenfranchised in the community into vampires (and let me tell you, the rules to the ins and outs of becoming a vampire seem to be just like Whose Line? in that everything is made up and the points don’t matter). We just don’t have a good handle on why. For once a movie doesn’t rely on exposition, and it’s nearly to its detriment.

So if you’re familiar with the Blumhouse of it all and can sit back for a fun, action-packed heartfelt thriller, then definitely check out Black as Night. It’s a great option if you want to support diverse storytelling and something different from the status quo. Just don’t get too into the weeds about the details.