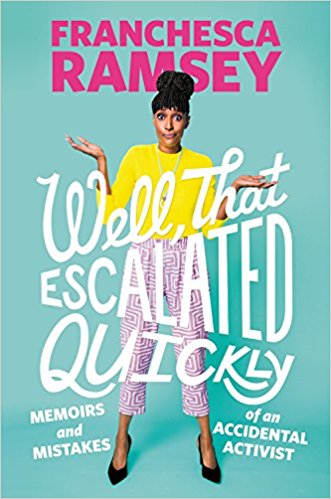 Most of us were introduced to Franchesca Ramsey by her viral YouTube video “Sh*t White Girls Say to Black Girls”, but very few people know how this video even came to be. From our side of things, it seemed that Ramsey was an overnight success, a combination of luck and good timing. Both of these elements may have played a role, but in her debut book, Well, That Escalated Quickly, Ramsey tells the story of how much work really went into becoming famous in “four hours”. The reality is, it takes time and dedication to become a viral sensation and even more of both to parlay that quick fame into a career.

One thing Ramsey knew for sure was that she didn’t want to simply become known as “the girl with the wig”. After “SWGSTBG” went viral, she was invited onto various talk shows to discuss the content of the video. In the book, Ramsey goes into detail about the backlash she was met with from both white and Black audiences. While she did not yet have all of the language to defend her experiences with casual racism and macroaggressions, responses to the video made it clear that experiences like the ones mentioned in her video were too common to remain undiscussed. This is how Franchesca stumbled into her role as an accidental activist.

Well, That Escalated Quickly is a combination of humorous memories, learning experiences, and advice not only for navigating the internet but for navigating life with a social justice lens. Ramsey’s book is as timely and timeless as we are (and probably always will be,) constantly renegotiating how we use the internet. In a time where half of Twitter seems eager to wield their knowledge as a weapon and the other half seems dedicated to using their ignorance in the same way, Ramsey’s advice is relevant and useful, even if you have no interest in becoming a YouTube sensation.

What I like most about Well, That Escalated Quickly is that Ramsey is willing to cop to things that I think a lot of people, especially people who are dedicated to branding themselves a certain way, would not. There is a story, for example, of Ramsey’s own accidental performance of transphobia, which she was called out for and learned from. One of my favorite chapters is “Guess Who’s Coming to Dinner? (It’s Lena Dunham)”. Ramsey describes meeting the star and creator of the HBO series “Girls” after critiquing and flat out trash talking her work on the internet. What I loved about this particular anecdote is that while Ramsey maintains (and I wholeheartedly agree) that there is a lot of legitimate critique to be made of Dunham and her work, a lot of her criticism and the vitriol behind the delivery of it stemmed from jealousy. I have never, NEVER, heard anyone admit to being jealous of Lena Dunham, though there are quite a few people I’m certain are, including myself at one point (I mean the woman had an HBO series in her twenties…)  Being jealous of Beyoncé is socially acceptable. Being jealous of Lena Dunham is not. I appreciated Ramsey’s transparency here, which she carried throughout the book.

From the bright smile on the cover that you just have to smile back at to the optimistic tone that runs throughout Well, That Escalated Quickly, Ramsey manages to deliver a fun and clever read while discussing difficult topics. There is even a handy glossary of rarely defined words that are commonly thrown around online.

I think Well, That Escalated Quickly will mostly appeal to readers who are already apart of Ramsey’s fan base. It is mostly personal, though it can serve as an introduction to some social justice conversations. As someone who is always curious as to how people get their start or big break in any category of the entertainment industry, I found this to be a great read. I think Ramsey will have more wisdom to offer in another ten or fifteen years, but this debut manages to sum up her experiences in a way that is not just entertaining but can be useful to others who hope to follow in her footsteps.

Kesia Alexandra is a freelance writer from Washington, DC. Her fiction is available on Amazon and she keeps an online journal at okaykesia.wordpress.com. You can find her on Twitter: @okaykesia.