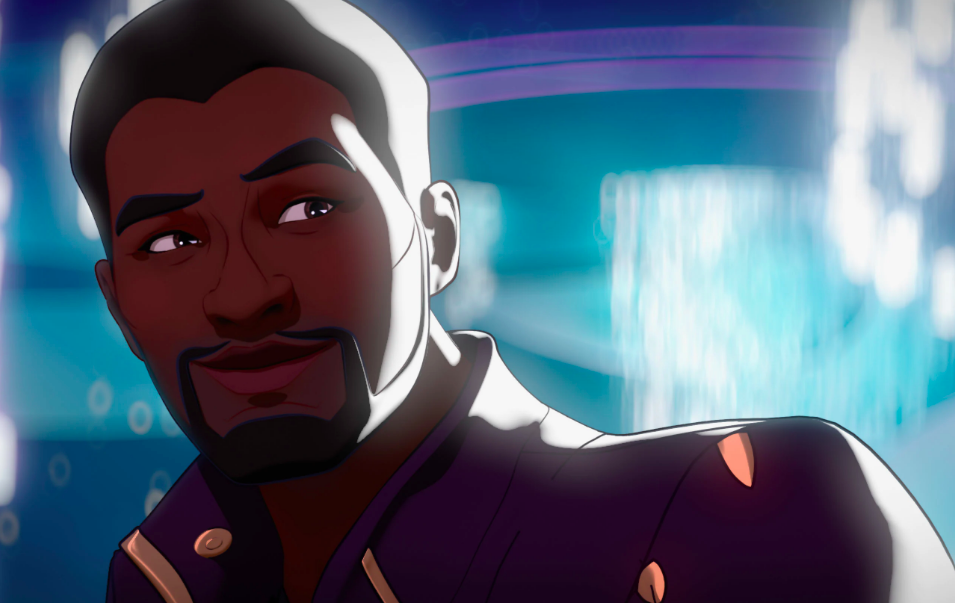 The Watcher begins by asking, “In a multiverse of infinite destinies, is your destiny determined by your nature or by the nature of your world?”

Star-Lord (Chadwick Boseman) is stopped by Korath (Djimon Hounsou) as he steals an orb. The moment Korath sees that it is Star-Lord, he fangirls over his work. However, Korath states that he has to take the orb by command of his boss, Ronan. Korath is more than excited to spar with Star-Lord and even is impressed when he is defeated.

Star-Lord, with Korath over his shoulder, runs outside but finds himself surrounded by armed soldiers. He is assisted by Yondu (Michael Rooker), who easily takes out the small army. The two chat about what they would do in the old days. However, Star-Lord points out that they can do more good than bad with the treasure they scavenge.

The Watcher shows us Star-Lord’s beginning in Wakanda, 1988. Young Star-Lord, known then as T’Challa, speaks to his father, T’Chaka (John Kani), on the need to be outside of the bubble surrounding Wakanda and doing more, but T’Chaka warns him about the destruction and war beyond. One night Star-Lord/T’Challa goes beyond the secure land and is abducted by Ravagers who accidentally pick him up instead of Peter Quill. Yondu is surprised by Star-Lord/T’Challa’s excitement and states that he can take the boy to see more worlds.

The Ravagers and Korath enjoy a drink together. Korath eagerly brings up Star-Lord’s adventures, including one where he convinced Thanos not to snap half the universe away. Thanos (Josh Brolin) shows up, admitting that he was wrong, and Star-Lord showed him the light. While buying a drink, Star-Lord bumps into Nebula, who checks out his recent treasure. Nebula still has issues with Thanos, but Star-Lord thinks she should reach out to Thanos and forget the past. Nebula points out that Star-Lord still holds onto his past. Star-Lord mentions that Yondu tried to return him but they found Wakanda destroyed. Nebula points out that he lost his home and goes around saving others’, then she gives him a job.

Nebula informs Star-Lord, and Ravagers, on the Embers of Genesis and their capabilities. The Collector (Benicio Del Toro) holds the embers and is the most ruthless, dangerous man in the galaxy. Yondu refuses to go on this mission due to the level of danger. Star-Lord speaks to Yondu about how they need to do more in order to change the galaxy — they need to go big. Yondu concedes.

The Ravagers, Nebula, and Thanos set a trap that allows Star-Lord to be snuck into the Collector’s basement while the Collector is distracted by Nebula and Yondu and security is busy handling the Ravagers’ diversion. Star-Lord is overwhelmed by how big the collection is and asks a captive, Howard the Duck (Seth Green), for directions. The directions are quite lengthy so Star-Lord busts Howard out to give him a tour.

Outside, the Ravagers’ diversion is stopped and the Collector’s home is put in lockdown. Star-Lord rushes down to a room before it is shut. As he walks through it, his necklace lights up, then a Wakandan plane turns on beside him. Star-Lord enters the plane, surprised. A video message from T’Chaka, who has aged, pops up. T’Chaka sent out many planes searching for his son and will continue to look for him. Just as the message ends, an armed Nebula, captured Yondu, and the Collector walk in. Nebula tells Star-Lord that she had debt and he was the payment. Damn.

Star-Lord and Yondu are tossed into a holding cell where the rest of the Ravagers are. Star-Lord confronts Yondu for lying to him about his home. Yondu states that he needed to lie so Star-Lord could see that he was just like him, didn’t belong in Wakanda, and needed to be with family. Star-Lord claims that they were never family. A guard comes up stating that the Collector is ready for Star-Lord, then knocks him out.

Nebula visits the Ravagers and breaks them out. She informs them that Star-Lord knew from the beginning that she had a debt. Their plan was for her to get the embers but the Wakanda plane caused an issue. As they walk out, Nebula shows that she got the embers and that Star-Lord has an escape plan.

Star-Lord uses his necklace claws to break the glass and is caught immediately. Lucky for him, Carina (Ophelia Lovibond), Collector’s slave, helps him escape. On his way out, Star-Lord is found by the Collector who has his fun showcasing weapons that he acquired.

The Ravagers are nearly caught by the Collector’s men. Thanos instructs the group to run to the ship while he handles things. He does well on his own for a while but gets hurt badly. Nebula hears him scream.

The Collector basks in having Star-Lord pinned, stating that Star-Lord’s new family has abandoned him. Yondu shows the Collector how wrong he is by showing up, prepared to fight for his kid.

Nebula shows up to save Thanos by using a few embers that create a massive growing plant. The duo makes it onto the Ravagers’ ship and head off.

Yondu takes a few hits from the Collector. Star-Lord unpins himself and tries to help. He and Yondu get thrown to the side. The two decide on a plan that results in the Collector losing his control weapon and ending up in a glass cell. Star-Lord hands the weapon to Carina, who is ready to use it by unleashing all of the captives to have their way with the Collector.

Star-Lord and Yondu make it off the planet by using the Wakandan plane. Yondu begins to apologize but Star-Lord lets him off the hook. Star-Lord admits that he doesn’t know where he belongs. Yondu tells him that it is not a matter of where he belongs but where he wants to be; he’ll need to follow his heart.

Star-Lord, with the Ravagers closely beside him, goes to Wakanda and is welcomed home by his parents and the kingdom. As the Ravagers enjoy drinking and eating with the court, Yondu is questioned by T’Chaka on how T’Challa ended up on his ship. Thankfully, Star-Lord saves him on that answer.

While that reunion is happening, Ego (Kurt Russell) visits Peter Quill at his DQ job.

I wasn’t expecting the T’Challa/Star-Lord episode so early. The combination of the two worlds was fun. T’Challa thrived as a Ravager, keeping the universe safe and feeding people is exactly on brand. Of course, he prevents Thanos from snapping the universe. The storyline was cute, we got to see old favorites who are slightly different and had an adventure. I do hope Chadwick Boseman enjoyed working on this. His performance was immaculate as always. Considering that IMDb states Chadwick is in four episodes, I hope his character is just as fun.