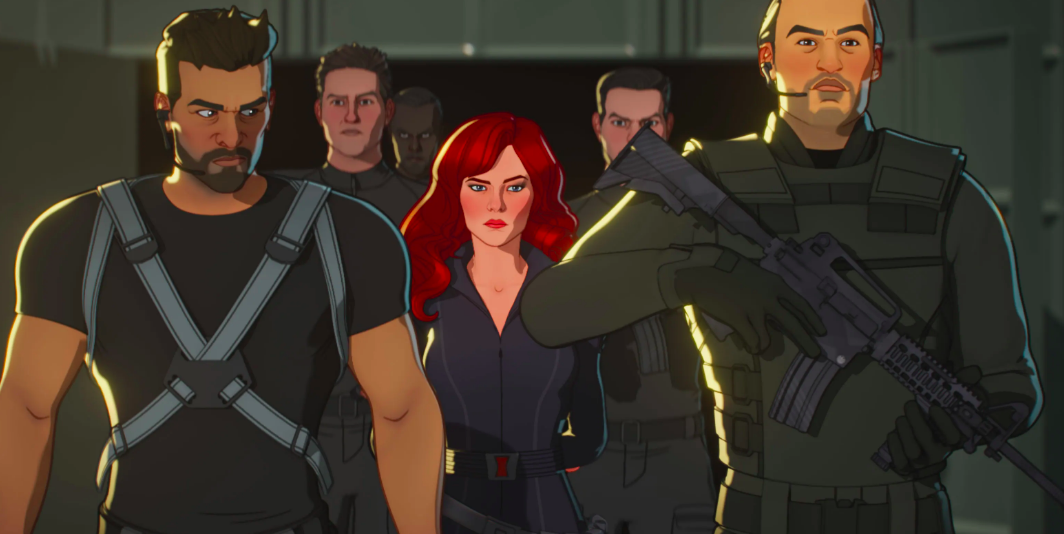 On Monday, Nick Fury and Natasha Romanoff (Lake Bell) discuss his plan to bring together a team to avenge the world. They talk to Tony Stark (Mick Wingert) about joining the Avengers, then give him medicine to stop the spread of his infection. However, instead of Tony getting better, he dies on the spot.

The Watcher telescopes us through one week, and three different stories unfold: Iron Man battles his demon, Bruce Banner (Mark Ruffalo) makes an appearance, and Thor is exiled to Earth. This is the beginning of creating the Avengers. In another multiverse, this isn’t the case.

Tuesday: Natasha is being arrested for killing Tony. S.H.I.E.L.D. has protocol for such things. Nick speaks to her briefly about how Tony’s antidote has been compromised from the inside and he needs her to help figure it out. While in transit, Natasha punches her way out of the guarded truck.

Nick meets with Clint Barton at a site where a mysterious hammer has landed. While they speak, guards are being taken out one by one. Phil Coulson (Clark Gregg) gets a visual on a man with beautiful hair making his way to the hammer. Clint is in position ready for the kill shot, but Nick tells him to wait because he wants to see what happens. Unfortunately for Thor, he is struck by an arrow. Clint insists he didn’t make the shot, but the evidence is in the body.

Nick and Phil discuss how strange that two men are taken out by their own agents. Nick goes into a cell to talk to Clint, but to his shock, Clint is near death himself. The guards state that they never let anyone in. Unfortunately, Clint doesn’t make it, and Nick suspects foul play.

Natasha bumps into Dr. Ross (Stephanie Panisello) to talk about the murder of Tony Stark. Dr. Ross has experience with keeping off the S.H.I.E.L.D. radar. According to Dr. Ross, this wasn’t a biological-chemical attack, and she’s not sure what was inserted into Tony’s body. As Natasha is leaving, she gets a call from Nick about Clint’s death. Nick thinks his candidates are being targeted, so he needs Natasha to find Bruce. Luckily, she finds him in Dr. Ross’s lab closet. Natasha has them leave right away.

Phil drives back to the base with coffee but is distracted when an army lands near him. Nick and his armed men go out to meet the army and its leader, Loki (Tom Hiddleston). While Loki is making his speech, they are interrupted by a cell phone ringing.

Natasha is calling Nick while escorting Bruce. The two are confronted by General Ross (Michael Patrick McGill), tanks, and soldiers.

Loki is on Earth to find the killer of Thor, and due to the way Nick is speaking to him, Loki decides that the world needs to be taken. He pulls out the tesseract to shoot ice at everyone.

Someone shoots Bruce causing him to turn into the Hulk, but General Ross’s men claim it wasn’t them. While Hulk is smashing everything and everyone, his body inflates and he blows up.

Nick gets Loki to listen to his pleas. Nick insists that they’re on the same side and should work together to find Thor’s killer. Loki gives him until sunrise to produce the murderer.

Natasha acquires access to the Avengers Initiative database and finds out that a woman who died two years ago accessed the database two days ago. Just when she is calling Nick, she is attacked by someone. Nick doesn’t answer, but Natasha is able to leave a message stating, “It’s all about Hope.”

Nick replays the message at a coffee shop. Coulson reminds him that they have only four hours left and that Nick is the only Avenger left from the initiative. Nick says he’s not the only one left. He heads to his car to retrieve a beeper but realizes what Natasha was saying. He puts away the beeper and drives to where Loki is stationed to make a deal with him.

Thursday: In San Francisco, Nick visits Hope Pym’s grave. While he stands there, he is visited by Hank Pym (Michael Douglas), who is furious about the death of his wife and daughter. Nick goads him into confessing to each murder that he has committed. The two engage in combat, with Hank using his Antman technology. However, he isn’t in battle with the real Nick Fury — he’s fighting Loki, who is using his magical tricks.

Once Hank is defeated, Loki and Nick reveal themselves. Nick states that Hope was well aware of the work S.H.I.E.L.D. was doing and that she will never be forgotten. As Hank is taken away, he yells that Nick should honor Hope.

Loki tells Nick that they should be allies, and he would like to extend his time on Earth. Nick asks for how long.

Friday: At the United Nations, Loki and his Asgardian army make a press announcement that the world’s nations have united under his rule and he is there to fulfill their destiny.

Nick and Phil observe the coffins of the Avengers and wonder what the Avengers Initiative was all about. Nick makes his way to an iced section of the building where a red-white-and-blue shield is frozen within. He says, “Welcome back, Captain” but turns to face Captain Marvel (Alexandra Daniels), who is ready for a fight.

This episode was truly a wild one. I wasn’t sure who the killer was. I never considered it to be Hank Pym of all people. Loki even got to rule Earth! He truly fulfilled his destiny. I honestly have no idea what to expect next. I had no clue that Thor, Iron Man, and Hulk shared a significant week of history. I wonder if Steve Rogers would’ve made an appearance at some point.