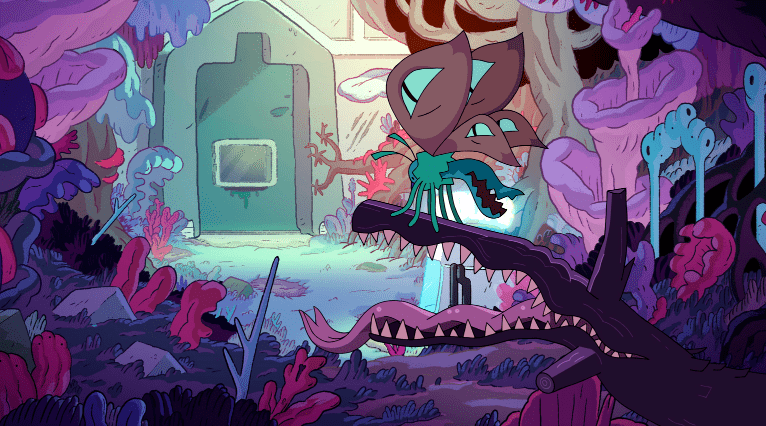 C’mon grab your friends and join BGN for a breakdown of the special return to the Land of Ooo and beyond with Adventure Time: Distant Lands. Based on the animated series Adventure Time by show creator Pendleton Ward and executive producer Adam Muto, these four specials explore the unseen corners of the world with both familiar and exciting brand-new characters.

Plus, the panel dropped a righteous sneak peek of the second special, Obsidian. It can be accessed on HBO Max, which is nice.

This amazing Adventure Time: Distant Lands panel started viewers off with a clip from the first episode that is centered around BMO.

BMO is trapped in a land that needs saving with a brand-new cast of characters written with the same Adventure Time charm that fans know and love. The young and cheeky robot meets Y-5, a cute bunny-like new friend that needs BMO’s help to save her friends.

Following the clip, attendees are given the best of greetings by the beloved Michaela Dietz, who was revealed to be voicing a new character named Glass Boy in Adventure Time: Distant Land’s second episode, Obsidian. As the moderator, she got things started by asking the voice actors and the executive producers some key questions about the show.

What Inspired These Adventure Time Specials

Muto started off by explaining that Distant Lands was actually a much older idea, pitched years ago as a mini-series with BMO, Marceline and Bubblegum.

To avoid misconception, he clarified that this is by no means a reboot, but it’s in the same soup. The same soup meaning that it’s still in the Adventure Time world that fans are familiar with, but it’s taking the time to explore character specific story arcs.

He focused on which characters could bring something else to the story, whereas he felt like Jake and Finn’s story arcs were completed.

There also several characters that Adventure Time writers voiced for the original series that Muto was interested in bringing back during the specials.

Why BMO is the Main Character of the First Episode Special

Simply put, Muto explained that he chose BMO for the first episode because he’s recognizable and cute. He’s a character that feels younger and is fun by design. It was exciting to put a generally younger aged character with an older presence within the show in a situation that he wouldn’t do so well in.

There is a surprise ending during the first episode that won’t be spoiled here. However, fans can head to the Comic-Con video to watch as they answer questions about how it happened.

Muto did say that the show developers had the image as a point of focus early on and they weren’t sure it’d make it on.

Yang explained that what happens to BMO at the end of the episode is a time spin, as he gets some answers and insights that many Adventure Time fans have been dying to know for years.

The Friendship Between BMO and Y-5

Yang shared with viewers some of her favorite BMO lines and why they are her favorites. She smiled and said, “BMO always bounces” and “We will always bounce back together” in the iconic BMO voice.

She told fellow panelists that she loves those BMO lines because it shows that BMO never gives up. He sees himself as a big boy, despite his innocent nature, and wants to be a hero to protect his friends. He is bossy but cute.

“Easy like potato pie” is another phrase Yang has an affinity for, even though she’s never had potato pie. It’s safe to say that Yang is just as cute in nature as BMO is.

Curda also opened up about her experience playing Y-5 and how she believes BMO is a good influence for her character.

“The first time I read the script, it felt like my head was exploding. I watched Avatar in high school, and I’m honored to be a part of this community and family.”

If that comment wasn’t enough to tug at heartstrings, Curda goes on to say express what an inclusive, warm welcoming second home her Adventure Time cast has been.

When reflecting on her character Y-5, who has adorable bunny features, she explained that BMO inspired Y-5 to have new ideas for changes that needed to be made in her world. He presented an opportunity to build a stronger community.

In addition to being a catalyst for Y-5 making changes to her physical location, BMO also led to her heart-changing and her becoming more confident.

Olson, a fan favorite, reflected on how the Adventure Time finale showed fans the truth about Marceline and Bubblegum that they had been wanting to confirm for years.

She felt like it was important for the second special to talk about their relationship and provide more backstory.

“I got really, really excited when reading the script,” Olsen shared.

Dietz playfully teased Olson accidentally on purpose telling fans that Bubblegum’s past romantic relationship with Marceline was cannon years before it was confirmed, during a Comic convention.

Olson cheekily replied that she had a feeling, “if she said it, they’d have to do it.” Whether that’s a fact or not, audiences just can’t help but love the banter between Dietz and Olson.

She also shared that the new special will explore new sides of Marceline. It will be an interesting story arc to get over barriers from within herself. Olson reminded audiences that Marceline’s story started lifetimes ago, before the experiences of most other characters.

She had to go through a long cycle of being hurt and must tackle her issues before being with Bubblegum. Most people go through this healing process too,

Exploring the episode name and music of “Obsidian”

It was entertaining as Dietz prodded Muto to explain if the episode 2 title, “Obsidian” had anything to do with Steven Universe gems.

Muto laughed as he said, “Yes, the most powerful fusion!” but quickly confirmed that he was joking and explained that the name is more of a metaphor than the literal stone being described.

He explained that the inspiration for the title comes with the understanding that Obsidian is a natural glass that is both spiritually protective but also sometimes vulnerable.

He said while the fusion of gems is from another show [Steven Universe], his interpretation of obsidian is based on its emotional representations. Like, the way it cleanses and can help the mind de-stress.

These metaphorical meanings will most likely apply to Marceline and Bubblegum’s relationship down the line.

The Music in “Obsidian”

Most fans are in love with Olson for her amazing voice the famous musical tones she gives to Marceline, so music was one of the key conversations during this panel.

Olivia started by sharing that are new Marceline songs in the special. The show developers have new writers while maintaining many of the Rebecca Sugar-style elements that Marceline has had over the years.

The music and lyrics are meant to show how Marceline has grown as a singer in style and that she approached her musical expression from a different headspace than the one she had in the original series.

Muto also explained that they had had to have music for Marceline, as that’s a part of who she is, but he was careful to clarify that these songs fit the situations in the storyline.

He wanted attendees to understand that there will be no random breaking into song and dance. He wanted people to know that these songs are inspired by a different time in her life, like when she was a kid or when she was going through her punk phase.

Olivia opened up about her own process of emotionally digging for her role as Marceline when singing the songs for the episode.

She mentioned seeing everyone crying around her at the studio after she finished recording Marceline’s song. She asked everyone what was wrong, and they replied that hearing her song did.

Olson shared that’s how she wants fans to react when they watch the show too. Dietz poked more fun by saying, “You hear that everyone, she wants you to cry!”

Olson laughed, and said, “I want them to have a good cleansing cry.”

“Wizard City” and “Together Again”

The next two specials have been announced by name but not much else has been shared. Without spilling too many details, Muto explained that those episodes will focus on unvisited or less explored things in Adventure Time. It will dig in more.

The characters won’t be obscure, they’ll be well-known ones that fans will recognize.

Gifts to the Fans!

As a special treat, Olson performed the song “Monster” from the upcoming episode “Obsidian.” This unexpected blessing brand new to the public and immediately had listeners ready for water works.

Waiting for ‘The New Mutants’ is About to Get Really Old