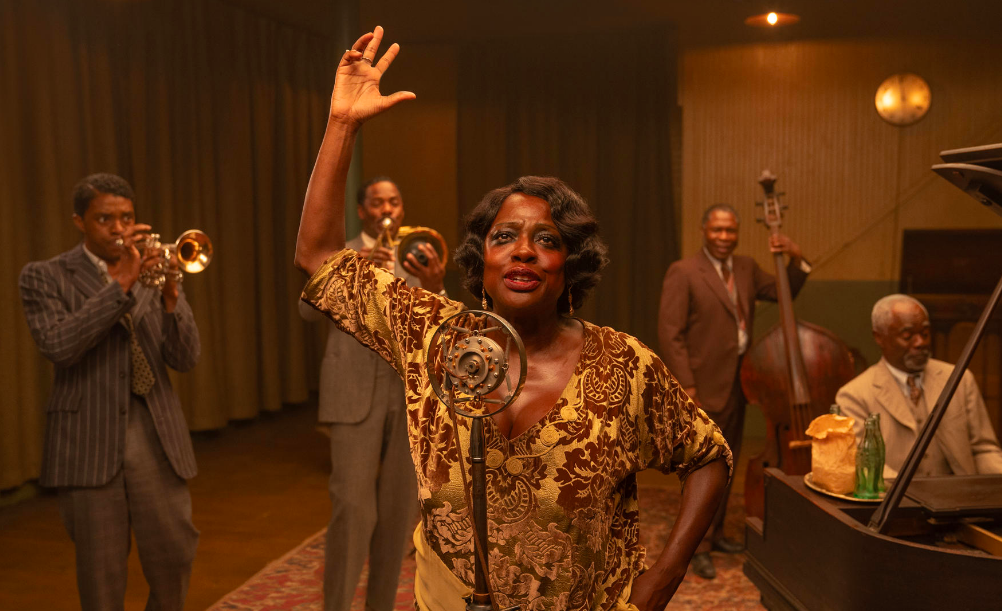 During an exclusive virtual preview event for closed press, Netflix presented never-before-seen clips and a conversation about the film based on August Wilson’s play of the same name, Ma Rainey’s Black Bottom.

Moderated by Nelson George, the discussion featured director George C. Wolfe and Academy-Award winning actor Viola Davis. As the titular character, Viola Davis transforms into Ma Rainey who is a very complex, sexually fluid, ferociously intelligent, trailblazing performer of the 1920s. Each of the clips presented prominently features the characters of Ma Rainey (Viola Davis) and her ambitious horn player Levee (Chadwick Boseman). There are some interesting dynamics that come into play between Levee and Ma Rainey’s relationship as the band surges in popularity. Including Levee having eyes for Ma Rainey’s girlfriend Dussie Mae.

Ma Rainey’s physical appearance is a woman who is fatigued, possibly plagued by her own inner demons, and also a woman that is fighting for her presence and relevance in Bronzeville, Chicago. As her sweat glistens off her chocolate skin and her mascara runs furiously past her tear-stained eyes she gives a smile that is as golden as the caps in her teeth. We want to know her story through and through, a woman who lives by her own rules.

Viola Davis says she went with the body structure of her Aunt Joyce when embodying the physicality of Ma Rainey. As described on the page, Ma Rainey was always sweaty and wore gold teeth. “I felt liberated when I had that padding on and cute,” says Davis.

George C. Wolfe describes Ma Rainey as a character that is visceral with cerebral power. She is someone with unmatched intelligence. “Somebody throws a game at her, she throws a better game back,” says Wolfe.

According to Viola Davis, she states that August’s main objective in his life was to chronicle African-American life in each decade of the 20th century. “We called it this century’s cycle plays,” says Davis.

“I felt it was my mission to absolutely not to make [her sexuality] a negative. I didn’t want to do that because when I read about Ma Rainey, she was unapologetic. It’s your job to play her as she is and that’s how you honor her,” says Davis.

George C. Wolfe says both he and Denzel thought of Chadwick during the casting process and believed it would be a brilliant idea to offer him the role. “We had a 2-week rehearsal period where we talked a lot and dug into the material and started shooting and Chadwick put his entire being into Levee,” says Wolfe.

Viola Davis already had a kinship with Chadwick Boseman prior to filming. “Not to compete with Chadwick’s mother, but Chadwick is my baby. This was my second time working with him, after playing his mother in Get On Up,” she says.

There will be a great deal of art, history, and magnetic performances to look forward to for the impending Netflix drama Ma Rainey’s Black Bottom. If the brilliant work of Wilson’s Fences adapted to the big screen is any indicator of what we can expect in this project, be prepared to hear of awards conversations very soon for this project.

The work of August Wilson is so incredibly impactful and relevant. Davis said it best when describing the playwright’s narratives.

“August lets us talk as people of color and this work has got to be in the hands of a great artist, to be able to understand whose hands to put in it, to direct it, and act in it,” says Davis.

Here’s a first look at the trailer below: