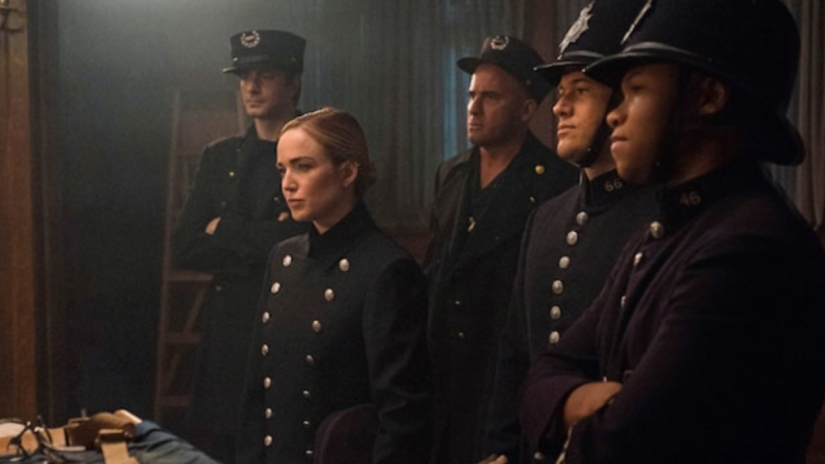 It was a pretty amazing Legends of Tomorrow this week as the crew tangled with the past and continues to try to prove themselves reliable to the Time Bureau. However, stuff just keeps happening and it’s all bad. From Rip’s appearance (and subsequent betrayal) to the revival of an old foe and Zari’s stolen totem, the hits just keep coming. So, I present a rundown of the episode as list of the many ways the Legends need not be underestimated this week.

What You Not Gone Do to My Legends this Week…

…Catch Rory slipping when it comes to vampires.

The gang is in London in the 1800s, right around the time Jack the Ripper was setting up shop. Before setting on the ground, the gang discovers that they may be on a case involving vampires. While everybody else is talking myth and lore, only Rory is strapping up with wooden stakes and garlic necklaces. He knows the vampires are nothing to mess with. Turns out that their target isn’t a vampire, but Rip on a rogue mission to catch a new evil on the loose Mallus.

…let Nate be the bait. He always gets caught up — why do y’all keep letting him do it?

Nate is the one who finds the London anomaly at the beginning of the episode, and yes, he is the one with the info on the vampires. However, everybody forgets the part where he says he is hopped up on coffee and little sleep. So, when they decide to make Nate the bait, I can’t help but yell at the screen. Besides all that, I guess everybody forgot about Nate making out with the Dominator and getting the team trapped in PT Barnum’s cages. Sarah really needs to leave him on the ship. Nate better be glad that they find him just before Jack the Ripper-like character tried to do a live autopsy on him.

…Underestimate Jax’s loyalty to the professor despite his persistence in separating Firestorm.

Jax and Ray are working on the side on a way to break off Jax’s connection to the Professor. No, he does not want to push the man out. He wants to set him free. Jax later reveals that he feels how much the Professor misses his new grandson back in 2017. He only wants to find a way to take all of Firestorm on himself — so that the new grandpa can go spend time with his family. It’s not hard to see how bad the Professor wants to be home. His daughter calls and is holding a screaming baby that only calms when his grandpa sings to him. Seeing the man singing to the baby really cinches things for Ray and Jax. Ray’s a born inventor and is a little too happy about helping Jax out with this. I don’t have a good feeling about that part.

…ignore Amaya when she tells your dumb ass to watch your totem. Looking at you Zari.

At this point, everybody knows that Zari and Amaya are connected by their totems. We also know that these women must come together in order to handle Kuasa the Water Witch who is out there somewhere in time. Of course, Zari tries to blow off Amaya’s attempts to connect. She wants to go back to 2041 and save her family. Sarah quickly vetoes that mess, but Zari gets all up in her feelings about the way they are treating her. The next thing we know, she is a part of a séance and being swindled out of her totem by Mallus follower. She gets is back later when she starts to remember some of the stuff Amaya told her about being responsible for the artifact. Let’s hope she is ready to listen now.

…let Damian Darhk’s throwdown to “Return of the Mack” slide without some kind of finger snaps, clapping or something!

The song from my high school days “Return of the Mack” was playing all through this episode. It first played at the during the team’s interview with the London doctor, from a modern smartwatch made by Ray’s company that the doctor lifted from a man he encountered in the 1800s. That man was Rip! The song is next sung by Nate as he awaits his fate at the hands of his kidnappers. The most spectacular scene with the song came after Damian Darhk is resurrected and is fighting the team and other foes. Darhk perfectly choreographs his shots to the beat of the music, letting everyone know that the baddest evil the team has faced is back. This is the unforgettable scene of the episode. Of course, Darhk is interrupted by Rip who freezes time and tries to kill the villain. Darhk breaks the time freeze and nearly kills Rip before getting away.

…backstab the team and think you gone go on your merry way. Not today, Rip!

So Damian Darhk is loose and the team has to figure out why he is making the extra anomalies. Sarah tries to confront Rip about his Rogue mission, his backstabbing the team while they were trying to help him (he uses a secret command to sabotage the Waverider and stall the team, so he can get away and continue looking for Mallus on his own), and his over garbage attitude toward the Legends since they started the season. Of course, Rip is arrogant and thinks he can do what he wants. But Sarah don’t play that. She called the Time Bureau on him. Rip is arrested, and the Legends are given permission to continue fixing time without such close Bureau oversight.