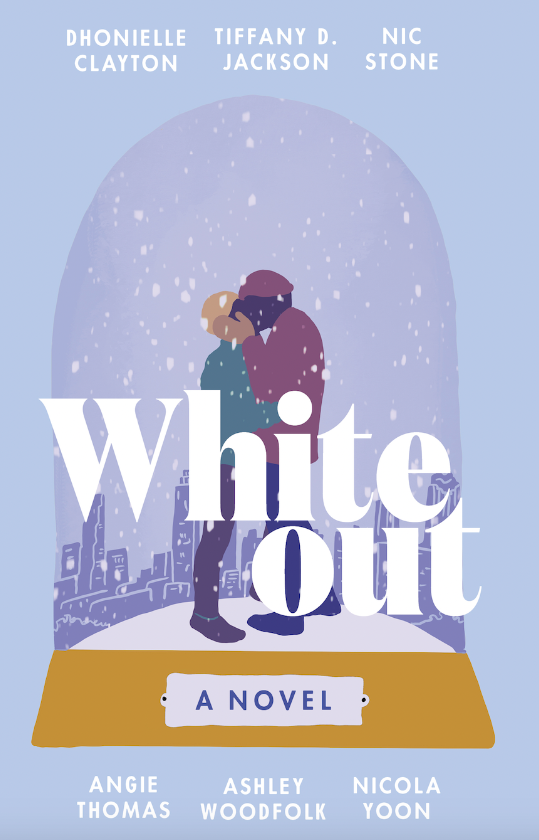 Do you enjoy stories about the experiences of being a young Black teen in the modern age, trying to navigate planning for the future while pursuing romantic interests and balancing parental expectations? If so, then Whiteout is the book for you. A collaboration between six writers, Whiteout is a novel that follows a group of friends in Atlanta who are close to entering adulthood and are juggling all of the responsibilities that come with that while sorting out their interpersonal relationships within the friend group itself.

The novel is set during a rare snowstorm that has taken over Atlanta and shut the entire city down. That however doesn’t stop our twelve main characters from setting out in search of Christmas gifts, taking control of their love lives, and pulling off the most elaborate apology that’s ever been performed by a teen. We’re given these unique viewpoints through the eyes of each character in each chapter. This allows for in-depth insight into their motivations and feelings that a singular protagonist wouldn’t allow. It’s done amazingly well, and you can read the personalities clearly in each line. There are also themes of identity, tradition, the meaning of true love, and how to be honest with oneself and the people around you.

Though the main driving force in the story is this abnormal snowstorm that’s put Atlanta at a standstill, there’s also the conflict between Stevie and their girlfriend Sola, who had a pretty intense disagreement over Stevie’s school project on love and whether or not it’s simply a chemical reaction in the brain or if there’s some truth to the magic of true love. It’s an age-old question but one that can be touchy and complex when you’re in a serious relationship. This is something Stevie found out the hard way, but something they plan on rectifying, nonetheless.

The story is filled to the brim with touching moments, witty dialogue, and funny moments that anyone who knows the late teen experience can relate to, like asserting your identity to your parents, upholding traditions that differ from your friends’ lives, incorporating your romantic partner into your plans for the future, and how to keep that partnership going strong as you pursue your ambitions. These are all things that the characters are navigating, on top of dealing with the holiday season and the aforementioned once-in-a-lifetime winter storm that’s brought the city to its knees. It gives a similar experience to classic coming-of-age shows or movies like I Am Not Okay with This or even Degrassi.

BGN was able to gain some insight from the six authors that brought Whiteout to life during an email correspondence. They pulled back the curtain and shed some light on the inner workings of this fun and emotional novel.

What inspired the decision to go with multiple points of view?

As there are six of us, it felt 1) like the most natural path and 2) like the perfect opportunity to tell as many love stories involving as many different Black kids from as many different backgrounds as possible. It’s important to all of us that Blackness and the Black teen experience be shown the precise opposite of monolithic.

There’s the backdrop of a rare snowstorm in Atlanta. How did that come into the planning of the story?

We picked the city that is home to three of the six of us and then tried to figure out what would shut the city down similarly to how the blackout shut down New York in our previous co-written novel, Blackout. Atlanta is infamous for our pathetic handling of frozen precipitation (a 2014 winter storm is still referred to as “the snowpocalypse” some eight years later), which also gave us a chance to incorporate the winter holidays. Storytelling goldmine!

There’s the representation of different cultures, backgrounds, and interests within the friend group. How important was that in planning these characters?

Very. Though that occurred pretty naturally. We all just wanted to reflect the world as we know it to be. Different people…are different. And can still fall in love with each other.

Young Black love is shown in these relationships in different stages. Are those depictions something that was integral to the writing process?

Similarly to our approach for wide representation culturally, it was also important to us to show as many highs and lows of love and relationships as possible. Also, it was fun!

This project has an ensemble of authors. How integrated was the writing process with six creative minds telling this interwoven story?

Well, once we decided on each author’s setting and romance trope, we each initially wrote our individual chapters in our writer silos with very little communication with anyone else. Then once we started folding the chairs together, the dipping into and out of one another’s stories began. It flowed pretty seamlessly.

You can buy Whiteout through the Harpers-Collins website as well as most book retailers. Don’t forget to check out the authors’ previous novel, Blackout, and perhaps also go see them on tour.