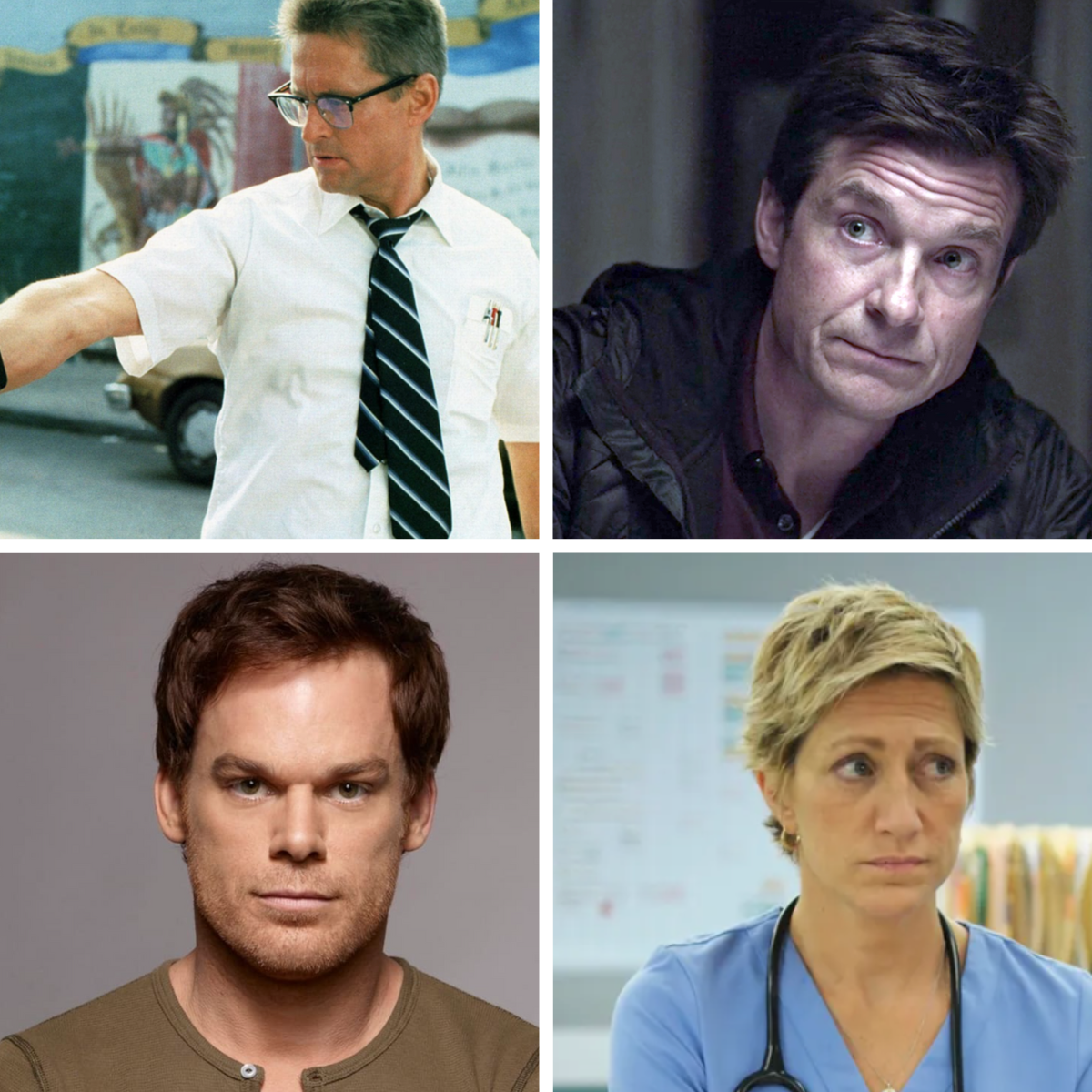 The pop culture landscape is absolutely crawling with antiheroes, those juicy characters who do bad things in the name of good and get a free pass because of it. Many of these antiheroes end up becoming heroes in their own right by the end of their stories, thanks to their unique cocktails of charming personalities and specific trauma.

Like killer of killers Dexter, cancer survivor Walter White in Breaking Bad, secret addict Nurse Jackie, money launderer extraordinaire Marty Byrde (Jason Bateman) in Ozark, and so many others who have become weirdly beloved despite their criminal deeds and sometimes significant body counts left in their wake.

In movies we have the likes of Michael Douglas as a regular Joe Schmoe who has reached his limit in Falling Down. We have Tyler Durden and his space monkeys in Fight Club, Nicole Kidman’s retributive detective in Destroyer, troubled self-harming journalist Camille Preaker (Amy Adams) in Sharp Objects, the wannabe prima ballerina in Black Swan, and Kate Winslet’s small-town detective in Mare of Easttown. They have all pushed boundaries of antihero-ness in different ways.

Everyone seems to love to root for an antihero. But, when you line up all of these characters side by side, an obvious fact emerges. Antiheroes are predominantly white. Their whiteness often protects them from legal consequences of their lawbreaking in ways that people of color don’t benefit from, in real life or on screen.

This phenomenon of the white antihero is the subject of Terence Nance’s extraordinary Random Acts of Flyness’ fifth episode in its first season. Nance takes a theoretical hatchet to the framing of an antihero from top to bottom in a scathing six-minute segment subtitled “The White Devil.” Nance narrates:

“The White Devil, also known as the antihero, is an archetypal character trope. White Devils are white men and women thrust into situations in which they are surrounded by other white characters who do not possess their preternatural level of genius or skill. The wrinkle is that the white devil is his or her own antagonist. Often some embodiment of their Jungian shadow consistently pervades their life and relationships.

“The power this shadow generates is the key source of the white devil’s exceptional technical genius. The white devil’s narrative function is to win in the battle against his or her shadow self and make sure the dark energy that their shadow self generates is used for good. … Have you thought about what makes these characters compelling? Why them? Why their stories? Is it because white people are the best at everything? Not only the best cops but also the best drug dealers?”

This narration is featured alongside a collage of ultraviolent scenes from popular antihero films, television films, and television. These include Breaking Bad, House of Cards, Damages, 24, Wolf of Wall Street, Drive, Weeds, Homeland, The Sopranos, American History X, Taxi Driver, Ray Donovan, Boardwalk Empire, Rick and Morty, Mad Men, and The Black List. Taken together, the imagery is chilling. In Nance’s estimation, the white savior and the white devil are different sides of the same coin. Both character tropes involve violence against and asserting white supremacy upon populations of color, both in the USA and abroad.

In fact, in Loki’s first season, we see the white devil/white savior narrative play out in the same character as Loki’s shenanigans begin exposing structural violence that keeps his alter egos and so many others trapped in vicious cycles. Teen Vogue even posed the question, “Who gets to be a lovable villain,” and the answer is white folks.

“…[W]hy do these characters persist? They persist because the white devil archetype in contemporary film and television functions as yet another display of white male dominance and social power, by framing the Jungian shadow as a source of white male cultural and social centrality. Its function is to peacock.

“To put on display a shadow-fueled virility and acumen. The desired effect is for the melanated masses to hesitate before challenging white supremacy. Their hope is that in any moment of resistance, no matter how big or small, they, us, *we* will remember that the white person or institution they are resisting has a devil inside them. An amoral devil that will not concede defeat under any circumstances.”

While there are hundreds of examples of white men and women on screen who tap into their shadow side for righteous causes, many of them function with total impunity and no legal or social consequences for their violence. In the same vein, take a second and list all the antiheroes of color you can think of. It’s a short list that includes Ma, Black Monday, The Wire, John Wick, Hustlers, Killmonger in Black Panther, The Chi, I May Destroy You, Bria (Carmen Ejogo) in the second season of The Girlfriend Experience, Beverly Hills Cop, Claws, Reva (Moses Ingram) in Obi-Wan, Pitch Black, The Fast and the Furious, and Bumpy Johnson (Forest Whitaker) in Godfather of Harlem.

Not surprisingly, the majority of these movies and shows are recent additions to the visual media landscape, mainly thanks to growing diversity and inclusion in writing rooms and behind the camera, as well as calls from audiences of color for fresh character paradigms reflecting marginalized communities in particular. Also, not surprisingly, many of these antiheroes of color do have legal and other consequences for their crimes whereas the majority of white antiheroes do not.

The disparity between fictional white antiheroes and antiheroes of color is a direct reflection of real-life coding of criminality, pathology, and law enforcement targets. When a white person commits a crime, they are handled with kid gloves. Who can forget the cops taking mass murderer Dylann Roof for a burger after he killed nine Black parishioners in their church? Yet Black men are gunned down by cops for the simple “crime” of existing in public while Black.

News media was ablaze for entire weeks while Gabby Petito was missing and her boyfriend/killer was on the run. But what do we hear of the hundreds of missing and murdered Indigenous women across America whose deaths remain unsolved? Crickets. In fact, real-life white women criminals like Anna Sorokin and Elizabeth Holmes get the celebrity treatment on screen, with entire shows developed to explore their lives as entertainment, real-life counterpoints to the many fictional examples of glorified white women lawbreakers.

Taking the term white devilry literally, it’s also fascinating to notice it’s mostly white folks — and white women in particular — who are centered in tales of demonic possession. From a cultural and social standpoint, it suggests that whiteness itself becomes a vessel for forces of evil, a dynamic that Jordan Peele cleverly unpacks in Us.

We learn every day that laws in the USA exist to punish people of color, and white antihero narratives contribute to this disproportionate leniency white people receive from law enforcement officials across the board. Se7en is one of the few law enforcement narratives that shatters white devilry tropes. Because, as Nance points out in “The White Devil”, white people who do bad things must be doing it for a good reason and deserve to be heard out.

White antiheroes are afforded the opportunity to be humanized for their sometimes terrible deeds. On the other hand, when people of color do bad things for a good reason, the good reason never receives any benefit of the doubt. These bad deeds are taken at face value, and punishment is often draconian and without mercy. This is how folks of color rarely get the opportunity to be seen as an antihero on screen — or in real life.

James Baldwin writes in his seminal text on film criticism The Devil Finds Work: “He who has been treated as the devil recognizes the devil when they meet.” Baldwin is referring to the media of his era that made monsters of Black men and women to perpetuate the myth of white superiority, a dynamic that lives on today. The white antihero remains one of the cornerstones of white supremacy in visual media, celebrated instead of eschewed, setting a cultural backdrop for law enforcement leniency in real life that doesn’t extend to any community of color.