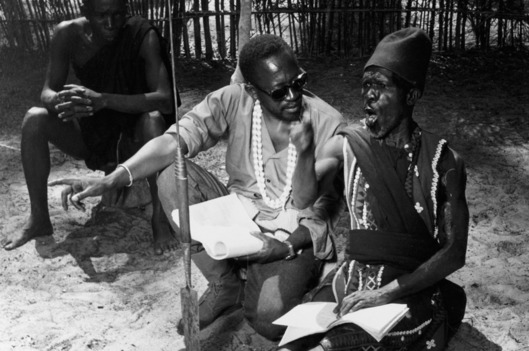 Ousmane Sembene is the inventor of African Cinema, and with his inventions, he asks the question, “How do you reach an African audience with African stories?” By watching his documentary, SEMBENE! available on Netflix the storyline opens up with a quote, ” If Africans do not tell their stories, Africa will soon disappear.” – Ousmane Sembene

The imagery and insight of Sembene are very powerful and informative, as you get an insight into the childhood of this young scholar who was destined for greatness. ” It’s not us who present our images. It’s others who create the image of black people, of Africa.” And when you think about it, do you need someone to tell you who you are or do you already know who you want to be?

Sembene created his success despite the circumstances of his upbringing and surroundings. “I have a job I love, and no one asked me to do it. No one. I do it because I want to talk to my people.” As the word SEMBENE! Appears on the screen colorfully bold with African animations and acoustics as a little African boy hides behind a sculpture of a monkey face following behind a white man, then the little boy slowly lowers the mask to reveal his eyes and himself, as the white man boards the ship from the dock.

“I can’t let his books and films be forgotten.”Samba Gadjigo quotes, who is the creator of this biography and also labels himself as Ousmane Sembene legacy keeper. While Sembene was living in France with another group of writers he took up employment as a dock worker and during an interview with the press, he stated, ” Africa is not only about animals, trees, and men. Africa is her conception of life, her philosophy, her stories.”

The documentary comes with personal interviews from Sembene, his mixed race son, his wife, his housekeeper, and more. Plus it shows all the celebrities, authors and another artist he meets during his lifetime. With many people in Africa still be illiterate Sembene films gave the people a chance to see what they could not read! “May Allah assist you both. May he not abandon you. May he enlighten your path. Since when was a child responsible for the failures of his parents?”

This accomplished philosopher used his substantial power to inform the world about the corruptions in wars, bring an end to female mutilation and other social events, but with every endeavor came a downfall because of his outspokenness against political figures many of his films were banned from being shown. ” Freedom is not something that can be given. Freedom is fought for at the risk of one’s life. Any people not ready to pay that price will never enjoy freedom.”

SEMBENE! Is not just a film for Africans, Blacks, and African Americans, it’s a movie dedicated to how we can all use our vices, choices and influences to make the world a better place than our past.

Christina Angela Jeter is an avid reader, lover of NOLA (New Orleans, Louisiana) & Halloween Horror Fanatic. You can follow her on Twitter: @cjeter