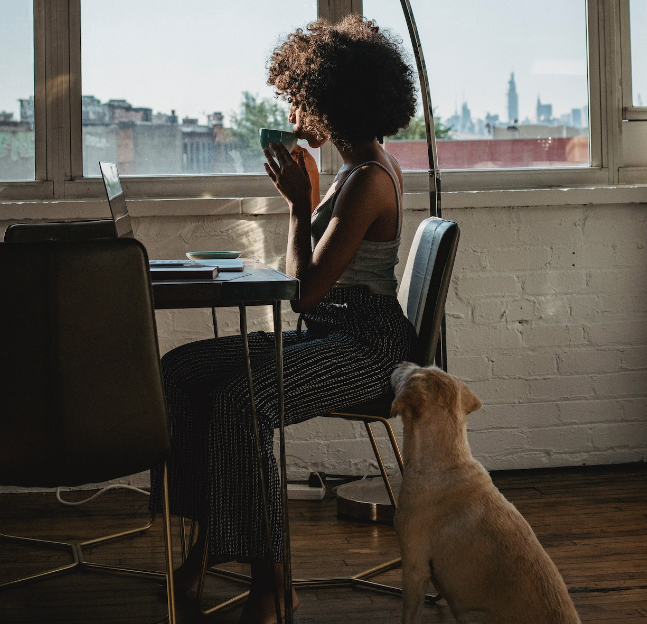 It’s safe to say that the COVID-19 pandemic has changed the foundation of office culture and the way employees work. This has become especially true for Black women and our experiences with racism and sexism in the workplace.

Since 2021, most office workers switched to working from home. It’s a blessing in disguise for many of my Black women friends, as the office is something they don’t mind leaving in the past.

As Black women, we face disproportionately high barriers in the workplace, including bias in hiring, microaggressions, and sheer disrespect. We are also more pessimistic about our company’s commitments to diversity and inclusion, which are usually not followed through on.

Black women are often at a crossroads between wanting to speak out against microaggressions at work and just wanting to melt into the background to protect our peace. There is this constant battle between figuring out how to fit in and not compromising what makes you who you are. It’s exhausting. Working from home not only saves time on traveling to work but allows a level of flexibility that can’t be bought.

Having fewer social obligations, fewer microaggressions, and more capacity to just be yourself is a win. Working from home also opens your eyes to how you were exploited as the only Black woman on the team, which may, as in my case, impact your overall well-being.

Open racism and sexism are universal in today’s workplaces, and many subtleties are also at play. For example, Black women in leadership roles must monitor and edit their behavior. It’s a tightrope that you feel you’re walking daily. When you seem unapproachable or disengaged, the result can be devastating when it comes to performance reviews and promotions. You can’t show anger, sadness, or disappointment because you have to keep your face, tone, and responses in check.

Here’s what is interesting: According to a study in Time magazine, white men are excited to return to the office. The data shows that more than 30% of white men want to return to a traditional office setting, where they rule. In contrast, only 22% of women (Black women included) want to return.

Remote work sometimes levels the playing field. There are fewer cliques and less informal chatter to deal with, and everybody feels more comfortable because you’re in your own safe space. Microaggressions can still happen in a Zoom meeting, as I know all too well. However, more people can witness and record them for future reference. This helped me when I decided to speak out against a racist incident.

We have to ask the question: Have we gained all the advantages that come with the flexibility to become a one-woman safety net? Well, I would say so. Typically, when no one else protects us, we have to protect ourselves. Working remotely does have its downsides, such as a makeshift office space, endless Zoom meetings, and caring for young children at home. The reality is that most of us would take all of that rather than go back to the office. That fact alone speaks volumes.

In the book The Souls of Black Folk, W. E. B. Du Bois said: “It’s a peculiar sensation, this double-consciousness, this sense of always looking at one’s self through the eyes of others, of measuring one’s soul by the tape of a world that looks on in amused contempt and pity.”

Du Bois introduces this struggle Black people face to remain true to Black culture while at the same time conforming to white society. It means wearing two faces at all times — and seeing yourself as a white person might see you. Back in the early 1900s, not too many white people had a positive perception of free Black people. Over 100 years later, not much has changed.

Perhaps the obligation belongs solely to the workplace to constantly review and relearn. Objectives must be put in place, not just written down for show, to make a workplace more inclusive. Initiatives have to be consistently reworked and carried out. More importantly, there must be a zero-tolerance policy for racist and sexist behavior.

Since the murder of George Floyd, companies have learned a lot about double consciousness. However, many are still just telling us what we want to hear but not putting any action behind it. Understanding why Black women, in general, do not want to return on-site is a good first step. It’s hurtful how race plays out in today’s workplace. We haven’t moved the needle as much as we think. The solution for Black women to get ahead in the corporate space shouldn’t be that we hide from the physical office. Instead, it has to involve the creation of space for us to exist and thrive for who we are and what we bring to the table.

PODCAST: Black In The Workplace