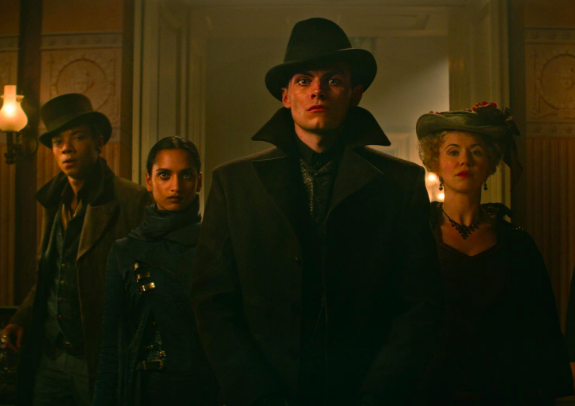 In theory, the new Netflix show Shadow and Bone developed by Eric Heisserer seems to be a riveting and magical show based on the popular Grisha trilogy by Leigh Bardugo. However, the show’s intrigue hardly extends beyond its engaging trailer.

While the concepts first introduced in the books garners a great amount of potential, the show falls short for a few key reasons. Starring Jessie Mei as Alina Starkov, an orphan who discovers she’s not only a Grisha but also the Sun Summoner, the show seems to have potential to both book readers and non-book readers alike. Yet, it fails to deliver.

The key issues pertain to the show’s pacing, character overloads, and somewhat rushed nature. The show struggles to give audiences a reason to emotionally invest in the characters, which makes for a quick disconnect.

There simply isn’t a solid hook to entice viewers to learn more.

When it comes to large scale fantasy shows and films, it’s clear that worldbuilding isn’t easy at all. When it comes to many shows based on popular books, the lore often overwhelms the length of each episode of the show.

Translating a trilogy to television is a daunting task that some shows pull off well. Unfortunately, this did not pan out smoothly for Shadow and Bone.

The show attempts to unpack way too much far too quickly. This creates a problem with pacing from the very beginning. Viewers can’t get situated in the magical world or Ravka or even feel the threat of the mysterious Shadow Fold looming.

The scenes move so fast at times that the story becomes disorienting. When audiences are lost, disinterest follows. This is disappointing because the overall plot is fascinating and, for many fantasy nerds, seems to be something they might want to unravel. It’s the classic tale of a certain Harry Potter-like “chosen one” that never asked to be chosen. Yet, it lacks substance, which is an irredeemable quality.

There are shows that flow cohesively and others that feel like several scenes meshed together, and Shadow and Bone has many lost in the mesh.

The one thing that Shadow and Bone does have that may keep some watchers is Starkov’s mysterious powers and what they may unravel.

Unfortunately, that curiosity isn’t enough, as the character overloading leaves many feeling a bit overwhelmed and driven out of the story. There may be very important storylines and people to propel the plot, but there’s no time for viewers to get to know them before a new scene quickly begins.

There are a lot of faces in this show and even recurring characters, but the empathy for their struggles and personalities doesn’t develop much.

Some of the characters are extremely static and predictable, which makes for a question of when they’ll change instead of building believable persona and then shocking viewers later.

While there’s a very His Dark Materials and Hunger Games vibe from this show, which seems like it would be an easy win with fantasy fans, the obstacle it’s facing is bland characters.

With both His Dark Materials and Hunger Games, audiences are eased into being introduced to the best friend duos and the universes that they live in. Lyra and Roger are given time to show watchers that they are closely bonded in an authentic way while also introducing their universe that’s filled with a lot of new lore to unpack. Hunger Games does something very similar, as we learn about Katniss and Gale and the dystopian world they live in while exploring their friendship.

Shadow and Bone attempts to do the same with Starkov and Malyen Oretse (Archie Renaux) as it unpacks their childhood friendship. However, it seeks to fill in the blanks with flashbacks and absurd amounts of dialogue rather than taking the time to show their connection organically. It’s a bit forced without there being any intimacy shown between the two characters.

Viewers understand that they’re best friends, but are less inclined to be emotionally invested in that friendship. It may be the actors or the writers, or a combination of both, but something is falling short.

A combination of simultaneous character missions and back-and-forths also seem scattered and disorganized.

The romantic developments are also another oddity in this series. From a plot perspective, this also amounts to a lot of unnecessary talking that still doesn’t invest viewers.

The chemistry between most characters seems lacking and often floats along without contributing overall value to the show.

Some shows start too slowly and build very little momentum, while others charge right in without cluing viewers in on what’s going on.

There are some outstanding shows that start off in both of those fashions. However, as they go on, they either pick up for more excitement or slow down for more analysis.

However, Shadow and Bone keeps going whether its audience is on board or not. This is especially true with the nonstop dialogue. It relies heavily on the overcompensation of a lot of unnecessary discussion.

This is a shame because when people tune in to fantasy shows, it’s typically out of a desire to see come pretty epic CGI or uncover new lore. Shadow and Bone fails to deliver in many ways. Starkov’s powers are sadly more interesting than she is, and that makes for the temptation to fast forward the show and skip the dialogue completely.

The show teases at the potential power of her character and how she may eventually hone it. This doesn’t make up for the lack of character development, but it would be great to see at least one cool magic scene in the mix.

The powers that some characters have are not clearly explained or explored either. They seems to do something similar to Avatar: The Last Airbender elemental magic, but even that is pretty diluted.

While the plot, characters, and pacing may take viewers out of the Shadow and Bone world, the cinematography and costuming gives them something to hold onto.

This war-torn reality is painted well and quite visually engaging. The shadowing contrasts do offer something haunting to this tale.

There’s an effective contrast of light and dark that works quite well with the show’s theme. It beckons us to see this world as dystopian and fraught with corruption, with some lasting hope left.

The costumes and characteristics of the Grisha help them to build an identity, especially when it’s easy to get lost in everything going on.

It’s unfortunate that it takes quite a while to get to the most visually stunning CGI of the show. The best graphics aren’t introduced until the season is nearly over.

In fact, things don’t start getting interesting until most of the season is said and done. This is one fantasy show to miss or place at the bottom of your list.