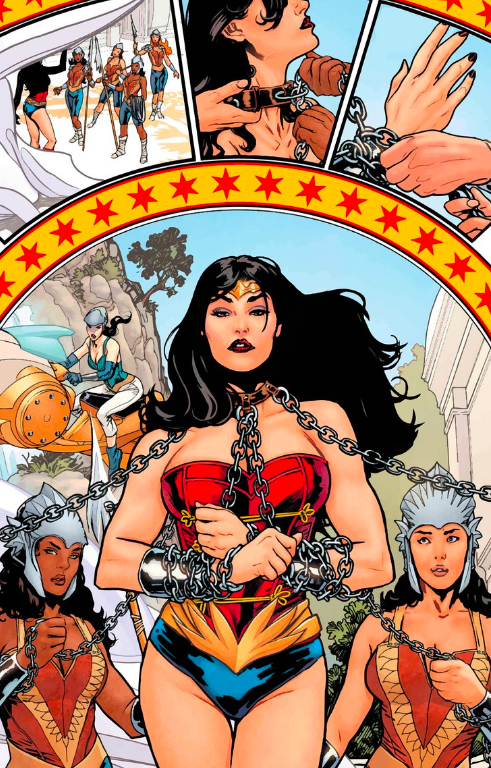 In Greece, truth and sex were linked, in the form of pedagogy, by the transmission of a precious knowledge from one body to another; sex served as a medium for initiations into learning.

This is one of the primary reasons Wonder Woman’s main weapon is the golden Lasso of Truth. William Moulton Marston, a Harvard graduate, self-help author, and comic book writer who created the character Wonder Woman as well as the inventor of the polygraph lie detector test — understood the importance of the character he was creating in his particular era of 1941. Wonder Woman, for Marston, was a symbol of everything our society lacked then: free love and equality for women. The Angela Robinson film Professor Marston and the Wonder Women also explores his history in this respect.

Marston was in school during the Suffragette Movement, where women, borrowing from the abolitionist movement, chained themselves to the gates of the White House in protest for the right to vote. In this way, every time Wonder Woman was tied up or chained, this symbolized her need to escape men’s power over her. In the comics, she is often referred to as Mistress and for another to dominate her is a power struggle that she always wins. And to this, Marston believed that:

Though, feminists today who have very little knowledge of Wonder Woman from the Golden Age of comics tended to turn their nose up and feel offense over the Wonder Woman Earth One graphic novel series. Grant Morrison and Yanick Paquette wanted to return Wonder Woman to her bondage roots in their 2016 Earth One series.

The Earth One series, unfortunately, was the first time in decades that the Wonder Woman stories actually worked (it still had its problems, but that’s for another time). Why? Because Wonder Woman’s costume and bondage go hand in hand. As mentioned earlier, she uses the Lasso of Truth to bound her foes, which makes them tell the truth—they submit to her. Her bracelets are a defense against bullets but look like wrist shackles. So, when the Comics Code Authority of 1954 decided to ban “horror, excessive bloodshed, gory or gruesome crimes, depravity, lust, sadism, and masochism” and directly addressing Wonder Woman, saying “Illicit sex relations are neither to be hinted at nor portrayed. Violent love scenes, as well as sexual abnormalities, are unacceptable” the stories just didn’t seem to recover. Though, DC tried.

How do you view the themes of Golden Age Wonder Woman?