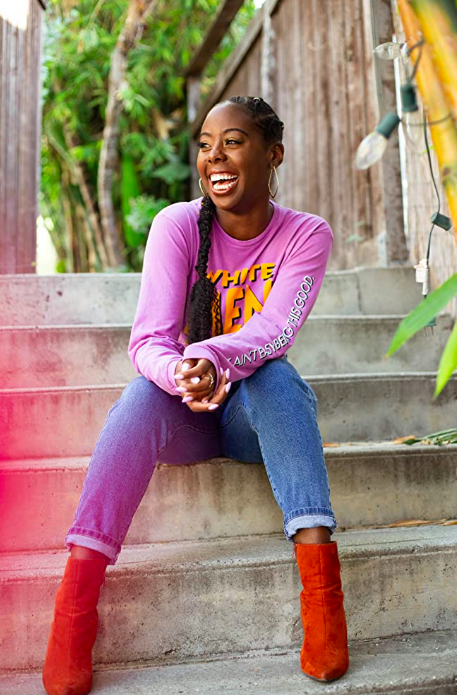 Director and producer Winter Dunn directed the powerful and heartening short film Junebug, written by Nicky Davis. It premiered at the American Black Film Festival (ABFF) and went on to screen at the Black Women’s Film Network on October 10.

The film tells the story of a daughter and father with a complex, loving, traumatic, and rhythmic connection. Audiences are taken through their nostalgic relationship painted in musical tones and seasoned with a transformative exploration of an unresolved heartbreak.

It depicts the ever-wonderful yet painful experience of loving someone who is flawed. Dunn does a beautiful job reminding viewers that memory and connection can be felt in a multiplicity of ways, and, just like musical notes, they all have their own unique feel and expression.

Dunn produced Numa Perrier’s Jezebel, which was acquired by Ava DuVernay and is currently streaming on Netflix. In addition to producing/directing digital editorial content for Condé Nast Entertainment, Dunn directed Season 1 of All Her with Angela Rye for Quibi.

BGN was able to catch up with Dunn and ask about the compelling film, and we were not disappointed. Dunn, a true artist and storyteller, was eager to share the complicated and beautifully crafted world of Junebug.

What inspired you to create Junebug?

Nicky had never written a film, but I knew together we’d make something really special. I told her that I was really fascinated by the relationship between Black fathers and their daughters. I have a complex relationship with my dad that I’ve never seen on film, I’ve never seen in television. We just don’t see many variations. It’s either the absent Black father or the hero Moesha-like dad that’s like, no one’s ever going to date my daughter, you know.

We were just really fascinated by a more complex relationship and what it looks like to also heal from some of the pain of that relationship. So, this film has been a piece of healing for both myself and everyone involved.

How did music influence both Junie and her father and the creation of both of characters?

I feel like music is the love language between Davis and Junie. It’s where they’ve always connected from the little girl to now she uses music to unpack her story and try to write her own narrative.

That’s very reflective of both me and Nicky. Her father was an alcoholic drummer, and with my dad, I grew up on records and listening to old school and funk. When I’m stuck creatively, music is where I turn.

We wanted music to be its own character in this film and for it to really drive the story forward, because it really is a love language that ties all these characters together.

How does the film reflect the complexity of love and family?

Well, I just feel like families in general are very complex. We have such complex relationships across the board, and we oftentimes don’t show that in our work. We don’t show the complexity that lives in between these dynamic relationships. So, with Junebug, we really want it to simply and cleanly just tell you what happened. Like, we’re not trying to beat a dead horse, like this is a sad story or this is a story about overcoming it. Really, it’s just, this is what happened in this woman’s life, and she’s trying to navigate her past the same way we are.

You know, our parents are humans just like us, and they’re doing the best they can in the moment they’re in, right? Davis is loving his daughter the best way he knows how to, and if she came out hurt from that, that’s life. That’s what happens.

But it also brought her a lot of magic and creativity, and she might not be a powerful writer if he wasn’t her father. We wanted to tell a story that is honest. I think we all have complex relationships with our families when we really take the time to look back.

Did you have a favorite scene to direct?

Yeah, I did. So, I don’t want to give too much away, but there is a scene in the film that’s her final painful memory that she has to work through, and it’s when her dad leaves. That scene, as simple as it feels, was very complex to shoot. For all my film nerds, it was all one Steadicam, one take and working with a child actor. There’s a lot of choreography there, right?

Like [telling the child actor to] just step forward three times. I need you to hold, then I need step forward. You know, it’s these tiny bits of choreography, and I was very nervous about it.

But Terrence and Calah [Lane, young Junie], they are just phenomenal hands down, with such beautiful talent. When creating that scene, it had a feeling that everyone on the team was glued to monitor because it felt so rich and so grounded and painful. When I watch that scene, it’s like my dad walked out on me and I really wanted to show that she was alone.

While there’s a lot of beautiful pieces of their narrative, he left her alone. That is something that stuck, and that’s something that’s the final piece of the puzzle. Like, this is what I’m still hurting from. This is why I’m trapped, because he left me. What does that look like? What does that healing look like? So, I would say that scene for me is what gets me and my heartstrings.

What was it like to work with such a small cast? Was it easier to capture more intimate moments?

Well, I would say in terms of capturing intimacy, I was just very fortunate to have a very talented group of actors. Everybody brought their A-game. Terrence and Calah, the minute they walked on set, they realized they had a connection and they had met before. It felt very destined that the people involved in this film were supposed to be involved in this film, and you feel that. You feel that there was a real chemistry that everyone had.

So, in terms of working with a small cast, I prefer that. I come from theater. I’m not an ego director back in her chair, like doing her thing. I want to be on the ground, in the dirt, in it with you.

That really reminds me of the scene where they’re laying on the floor and I laid on the floor with them. I’m sitting right there, like, what is this moment, guys? I want us to capture it authentically. I don’t want it to feel like we’re putting on a performance on top of something.

It’s like, just be whatever that means in this moment and in this place, trust it. That’s the place we’re going to create from.

So, I love working with a small cast. If they’re powerful and they’re ready to do the work, we can sit in this moment all day. I was very blessed and very fortunate to have a powerful, powerful team.

What inspired you to have the film go between young Junie and adult Junie?

In some way that’s a marriage between me and the writer. A lot of the story is inspired by her true story. Her father was a musician that she found out was an alcoholic, and with a lot of those memories, she pulled on her own memories and was healing through her own path.

I feel like the adult journey is a lot of my story. It was very important to me that she was a Black woman in a healthy relationship, even though she had a complex relationship with her dad. The “daddy issues” narrative was something I really wanted to push back on.

I wanted Calvin to be a man who was supportive and loving and kind. He’ll cook dinner if he has to, he’ll lay on the ground with her if he has to, and he’ll be there to help facilitate what he knows is inside of her.

I thought it was important to not only show her growing up as a kid, but to show how that pain affected her today. Adult Junie is all of us. All of these grown Black women in the arts, we’re writers, we’re directors or filmmakers, and we’re doing our thing, right? She has the work, she’s doing the work, but she’s also combating this past that is present inside of her.

We thought it was important to spell out a beautiful narrative and also see how that’s affected her, but also see it didn’t hold her back. It didn’t stop her from pursuing her goals and her dream. She’s doing well. She’s just also now battling her own traumas. I think that’s real. I think that’s all of us in this world.

It was very important to show a grown Black woman with a healthy relationship, a man who loves her and the complex relationship with her dad, that those two things can be synchronous.

For all the young filmmakers out there and just all the people who are figuring out, How do I tell my stories, how do I best tell my story? I’m in LA, I’m alone. How do I make it happen?

I’m very inspired by the idea to keep fighting for your narrative, to tell your narrative. Junebug, for us, is a very personal story, and it’s a story that is true. It feels authentic because it is authentic.